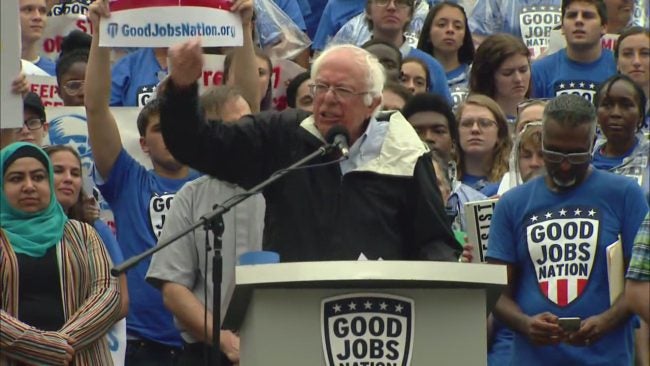 Sanders spoke on Monday afternoon to a large crowd around Monument Circle.

Organizers said the movement is designed to keep President Donald Trump accountable for what they call broken promises.

Earlier this year Carrier announced a timeline for eliminating 632 jobs at the company’s Indianapolis factory. With those jobs heading to Mexico, Sanders and others say they will try to keep additional companies from following suit.

The tour will crisscross the Midwest, making pit stops in Wisconsin, Michigan and Ohio, with a final stop in Pennsylvania.

According to the rally organizers, 140,000 workers have received pink slips during President Trump’s first six months in office, as companies continue to ship jobs offshore. They also claimed wages have fallen by 1.4 percent nationwide.

But President Trump’s administration tells a different story. According to the Commerce Department, economic growth has accelerated during Trump’s first quarter in office.

A Trump supporter who said she wanted to spend time with the crowd spoke with 24-Hour News 8’s Julian Grace. She had this to say: “So far, I see where he’s actually trying to do different things. He tries to do … more better jobs, things like that. He’s turning around the economy, the stock market has been so much better. And if he just wouldn’t have so much resistance, I think would be so much easier.”

24-Hour News 8 spoke to Trump supporters and Sanders supporters, as well as others who came out to the rally.

Sen. Sanders added that he’s working on a plan to ensure companies that outsource American jobs will face consequences to those decisions.

“I will be working with your Sen. Joe Donnelly to make certain that those companies across the country who are throwing American workers out on the street … going to Mexico, going to China. They are the last in line to get contracts from the federal government,” said Sanders.

Hundreds stood in the rain to listen to the senator from Vermont. After Sanders’ speech came to an end, some appeared pleased with direction.

“I really believe he is trying to fix our job situation and the middle class,” said Sanders supporter Chase Brock.

Watch more of the rally here: