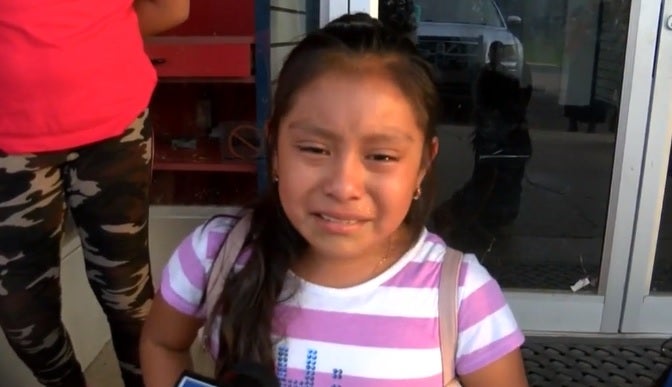 FOREST, Miss. (WJTV) — Following a massive undocumented immigration enforcement operation that resulted in more than 650 arrests, many children of those taken into custody are now left homeless with nowhere to go.

These children — some as young as toddlers — were relying on neighbors and even strangers to pick them up outside their homes after school and drive them to a community center where people tried to keep them calm. But many kids could not stop crying for mom and dad.

Fighting back tears, 11-year-old Magdalena Gomez Gregorio expressed her devastation being alone without her dad.

“Government please show some heart,” Gregoria cried. “Let my parent be free and everyone else please don’t leave the child with cryness and everything.”

This came after ICE agents raided several food processing plants in Mississippi arresting 680 people believed to be in the country illegally.

“While we are a nation of immigrants, more than that we are first and foremost a nation of laws,” Southern District U.S Attorney Mike Hurst argued.

But those children left behind and families impacted by each raid stressed their parents and friends are good people.

“I need my dad and mommy,” Gregorio said. “My dad didn’t do anything, he’s not a criminal.”

“The children that I’m with their moms been here for 15 years and she has no record,” Christina Peralta told us. “A lot of people here have no record they’ve been here for 10-12 years.”

For Christina Peralta who’s the godmother of two children who’s mom was arrested, she’s helpless as she watches the boys wonder when they’ll see their mother again.

“He said his mom is gone, that he’s upset with Trump, he said he just wants his mom back,” Peralta continued. “And they’ve been crying all day long since they got home from school.”

But with the help of Clear Creek Boot Camp owner Jordan Barnes and other community leaders the kids will have a roof to sleep under at his gym for the night with donated food to eat.

And in times like these, those in Forest stress you cannot forget the children through this.

“I understand the law and how everything works and everything needs to have a system,” Barnes stated. “But everybody needs to hold the kids first and foremost in their minds and that’s what we’ve tried to do here is give them a place to stay and ease the pain a little bit.”