What pandemic? Crowds swarm the Great Wall of China as travel surges during holiday week 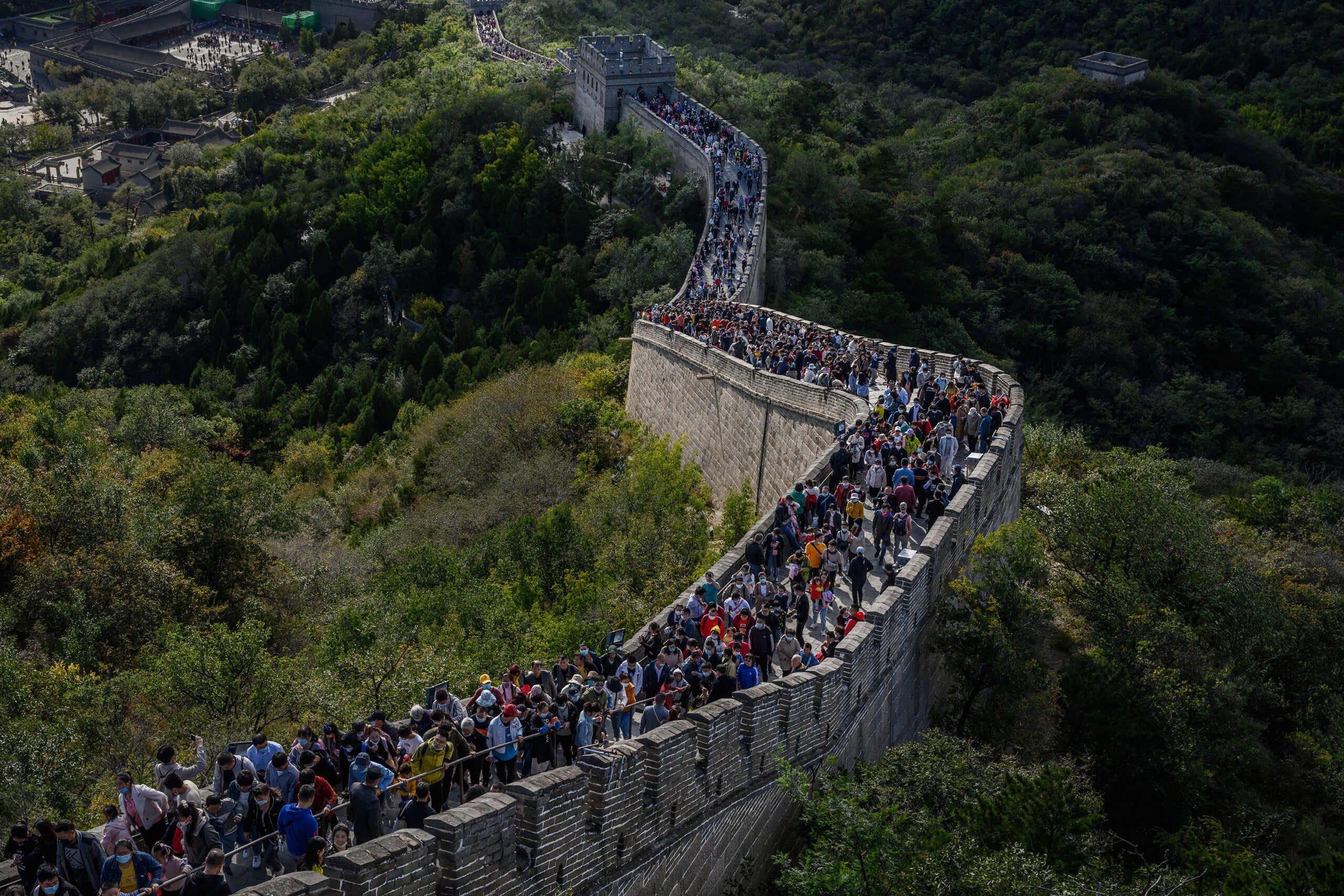 BEIJING, CHINA - OCTOBER 04: Chinese tourists walk on a crowded section of the Great Wall at Badaling after tickets sold out during the 'Golden Week' holiday on October 4, 2020 in Beijing, China. Officials are expecting the Golden Week holiday to boost China's consumer economy as people were encouraged to use the 8-day break to travel and spend. Tourist sites including the Great Wall were packed, with tickets selling out most days given pandemic restrictions and capacity capped at 75%. (Photo by Kevin Frayer/Getty Images)
by: By Jessie Yeung, CNN
Posted: Oct 10, 2020 / 01:12 PM EST / Updated: Oct 10, 2020 / 01:12 PM EST

(CNN) — The scene at the Great Wall of China this past week would have been unthinkable just months ago.

Photos of the tourist attraction in Beijing last weekend show massive crowds crammed along the winding wall, pressed together in close quarters and squeezing past each other through narrow doorways. Most are wearing face masks — but a number of people, including young children, pulled their masks down to their chin, and a few seem to have foregone masks entirely.

It’s Golden Week — an eight-day national holiday, one of China’s busiest annual travel periods, and a major test for the country as it emerges from the coronavirus pandemic.

China‘s official reported virus numbers have stayed low since the spring. There have been a few flare-ups, including a cluster in Beijing in June, but these were met with immediate lockdown measures and mass testing, and the outbreaks were contained within a few weeks.

With close to zero local transmissions, people flocked to bus stations, airports and transit hubs to travel around the country for the holiday, which kicked off on October 1. Local authorities competed to attract tourists, with provincial and municipal governments issuing travel vouchers and tourist attractions offering free or discounted tickets.

The Great Wall has geared up for the rush of tourists as well. The most popular section of the wall — the Badaling section — reopened at the end of March, albeit with new restrictions like requiring visitors to reserve tickets in advance.

In a notice released on September 29, the Badaling Special Administrative Region Office — a government agency that manages the Great Wall — warned visitors to continue following restrictions during the holiday season.

These restrictions include social distancing by keeping one meter (about 3.3 feet) of distance between each other. “It is strictly forbidden to gather together,” the notice said. Earlier guidelines on the Great Wall website reminded tourists to wear their face masks throughout their entire visit, and urged them to “obey the guidance and management of the museum staff.”

Neither of these restrictions seemed to be closely followed this week as bare-faced tourists crowded together on the wall.

Normally, more than 10 million people visit the Great Wall every year. The Badaling section, notoriously overcrowded with both local and international tourists, is so popular that officials instituted a cap of 65,000 visitors per day as of June 2019.

When the section reopened in March, new restrictions capped the number of daily visitors at 30% its usual capacity. Ahead of the Golden Week celebrations, authorities raised that cap to 75% of normal capacity, meaning a daily limit of 48,750 visitors.

On October 3, tickets for the Badaling section sold out entirely by early morning, according to Chinese state-run news agency Xinhua.

The Golden Week holiday — the longest in China along with the Lunar New Year holiday — has traditionally seen middle-class Chinese travel abroad in large numbers. But this year, visa restrictions, quarantine requirements, a lack of international flights and the ongoing danger of Covid-19 means that Chinese travelers are looking domestically for travel instead.

In just the first four days of the holiday, 425 million domestic tourist trips were taken in China — generating more than $45 billion in tourism revenue, according to data from the Ministry of Culture and Tourism.

“We have seen more tourists this year than in previous years. The number of daily tourists has doubled since we exempted the entrance fee,” said an employee at Wuhan’s Yellow Crane Tower attraction last week, according to state-run media Global Times.

This week’s relaxed restrictions and flouting of social distancing rules are in stark contrast to the anxiety that overshadowed China’s last major travel period — the Lunar New Year holiday in late January, as the coronavirus outbreak swept through Wuhan.

On January 23, two days before Lunar New Year’s Day, the Chinese government locked down Wuhan — but by then, the virus had already spread across and beyond the country, as hundreds of millions of Chinese people traveled for the holiday.

The sense of imminent danger has largely faded now, said Chen Qianmei, a 29-year-old from the southern city of Guangzhou, who flew to Shanghai last week for the holiday.

“I think China has (the virus) under pretty good control,” she told CNN. “I’m wearing masks and bringing alcohol wipes with me to clean my hands, especially before eating — although in Shanghai, few people wear masks now.”