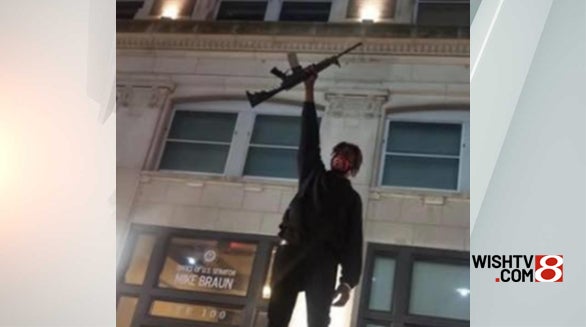 INDIANAPOLIS (WISH) — A 23-year-old man from Indianapolis faces federal firearms charges after police identified him as firing an AR-15-style rifle during downtown protests and riots Saturday, a federal prosecutor said.

“IMPD investigators located a video which shows Wooden raising a rifle, pointing the rifle in the direction of IMPD officers in the area of N Pennsylvania Ave and Market St., and firing at least one round. Wooden then lowered the rifle and moved farther east towards the IMPD Officers on Market St. Before the video ended, more gun shots can be heard,” said a news release from the U.S. Attorney’s Office in Indianapolis.

“Further investigation determined that Wooden has an active arrest warrant issued from the State of Ohio for Failure to Appear to face a charge of Drug Abuse, which was issued in Mason Municipal Court on May 12, 2020. Wooden was convicted of Battery Resulting in Bodily Injury in Marion County (Indiana) Superior Court on August 22, 2019 and is currently on probation in that case. Wooden also has an outstanding Protective Order against him.”

The release continued, “On June 2, 2020, Wooden was arrested by IMPD a short distance from his residence during a traffic stop. A search warrant was also served at Wooden’s residence at 7311 E 19th St. Detectives located Wooden’s American Tactical .223 caliber rifle, a small amount of marijuana, along with sixty (60) live .223 rounds and two rifle magazines. They also located the goggles and distinct facemask that Wooden had on his person the night of the protest/riots.”

Indianapolis Metropolitan Police Department had earlier Wednesday announced Wooden was behind bars after pointing a gun at residents and police officers during the protests over the weekend. IMPD said photos and videos were posted online of Wooden aiming the firearm during the protests downtown. Police said tips lead to Wooden’s arrest on Tuesday.

IMPD said the rifle involved in the incident was recovered by officers.