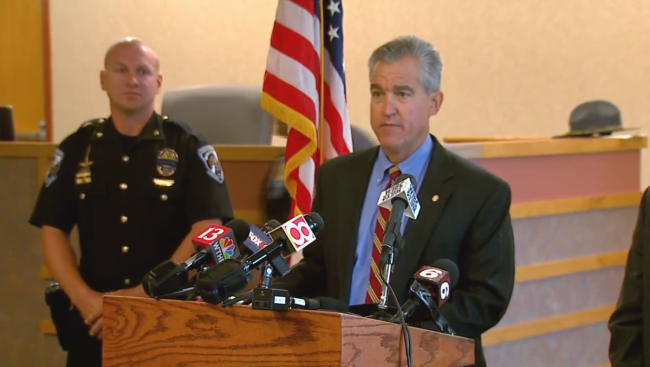 INDIANAPOLIS (WISH) — Federal investigators believe the man known online as “Brian Kil” who made threats online against central Indiana communities in 2015 and 2016 has been caught.

After targeting one victim in particular for a period of 16 months, Hernandez threatened a massacre at Plainfield High School where the victim attended. One message read: “I will slaughter your entire class and save you for last. I will lean over you as you scream and cry and beg for mercy right before I slit your ear.” He also threatened violence if the police responded and made racial and homophobic slurs.

On Dec. 17, 2015, the Brownsburg Police Department contacted the FBI, asking for assistance into the investigation of an individual calling themselves “Brian Kil.” “Brian Kil” was said to be attempting to extort a female minor, Victim 1, by attempting to get her to send sexually explicit videos/photos. Victim 1 is described as being less than 12 years old.

“I have no doubt Buster Hernandez had forgotten all about Plainfield, Indiana and the terror he inflicted,” said Indiana State Police Superintendent Doug Carter. “But none of us here forgot.”

The threats caused both Plainfield and Danville high schools to close temporarily.

Hernandez would then begin to target other various people in or around Plainfield using a number of Facebook accounts.

Also on Dec. 17, 24-Hour News 8 spoke to a number of students who were either named in the online threats or tagged in the social media posts.

On the evening of Dec. 18, The Shops at Perry Crossing, also located in Plainfield, were evacuated after receiving a threat posted on the mall’s Facebook page. Plainfield police said they believed the people responsible for the threats to Plainfield High School were also responsible for the threat made against the mall. Additional threats were made against the shopping center and a number of its retailers two days later.

After nearly a week passed without an arrest made, local authorities set up a tip line, working with the FBI to track down the person responsible for making the online threats.

Plainfield students returned to school on Jan. 4, 2016, with additional security measures in place, despite more threats being posted on Jan. 2.

On Jan. 5, federal agents served warrants related to the case at a home on Avon Avenue in Plainfield.

Then on Jan. 20, officials held a community forum to address questions and concerns related to the investigation. Court documents show Hernandez threatened a third victim into attending this community forum.

Through email, Hernandez sent her messages saying “you’re being FORCED to do what I say or else. Always remember that.”

In an “apology” note Hernandez posted to Facebook on February 4, 2016, Hernandez claimed that while he indeed fabricated most of the story, he’d never be caught by the FBI or Plainfield Police Department and that he’d get away with the crime(s).

To finally discover Hernandez’s IP address, the FBI inserted a small piece of code into a video which was only viewed by Hernandez.

Documents show that Hernandez lives in Bakersfield, California, with his girlfriend, Kimberly Francis, and her grandmother, Audrey Francis.

Investigators later witnessed Kimberly Francis, in late July 2017, consistently leaving the residence at 7 a.m. and then returning between 7 p.m. and 11 p.m. She was also spotted carrying, on a regular basis, two meals from a fast food restaurant.

According to Minkler, Hernandez stated he wanted to be known as “the greatest cyber terrorist that ever lived.”

Following more threats using different accounts, the FBI finally traced Hernandez’s IP address on June 9, 2017, by using a tracking tool on a video while posing as one of the victims.

Jay Abbott, special agent in charge of the FBI’s Indianapolis Division said, “This individual and others like him are very manipulative and coercive in how they are able to get young girls to do things.”

“We’re going to protect the American people and those who want to do harm to others are going to face justice from the FBI,” Abbott said. “I wouldn’t put my gentleman’s bet on the bad guy because we do have incredible capabilities and they’re being sharpened and honed all the time.”

If you think you are a victim in this case, you can contact the Indianapolis FBI Office or call 317-595-4000 and select option 2 to make a report.

The Plainfield Community School Corporation released a statement in the arrest:

We have been notified by the U.S. Department of Justice that an arrest has been made in the cyberterrorism case known locally as #BrianKil. News of the arrest brings tremendous relief to families not just here in Plainfield, but nationwide.

While we know very little about the case or the arrest, we do know that this individual is alleged to have been involved in similar scenarios across the country; this was not isolated to Plainfield.

The months of cyber-terrorism were very difficult, and yet we experienced a tremendous outpouring of support, cooperation, and assistance. Our PCSC employees worked diligently to ensure our students experienced as much normalcy as possible, while continuing to provide a safe learning environment.

Superintendent Scott Olinger stated, “Thank you to our students, who conducted themselves with dignity and respect during a very difficult time. Thank you to our parents, for your support and encouragement. And thank you to our staff. Your dedication is, quite simply, the best.”

While the threats have been silent for more than a year, we remember all too well the stress that we endured. Superintendent Olinger added, “It is important to note: this does not mean that our safety and security measures will lessen. Protecting the children of Plainfield will always be our #1 priority.”

We’ve learned a great deal over the past 20 months. Cyber crimes are far more difficult to investigate and solve than television shows make it appear. But the cooperation of countless public safety agencies has resulted in an arrest, and we are incredibly grateful.

The Shops at Perry Crossing also released a statement:

On behalf of The Shops at Perry Crossing, we want to extend our heartfelt thanks to all law enforcement officials, and specifically the FBI, Plainfield Police Department, Brownsburg Police Department and United States Attorney’s Office, for their diligence, persistence and professionalism during this difficult process. From day one, these individuals worked tirelessly to ensure our community’s safety and bring to justice the criminals who terrorized so many through repeated cyber-attacks. Today’s announcement allows our community to move forward with a much greater piece of mind, and for that, we offer our sincerest gratitude.

You can read the entire criminal complaint against Buster “Brian Kil” Hernandez below. These documents include strong language and threats.