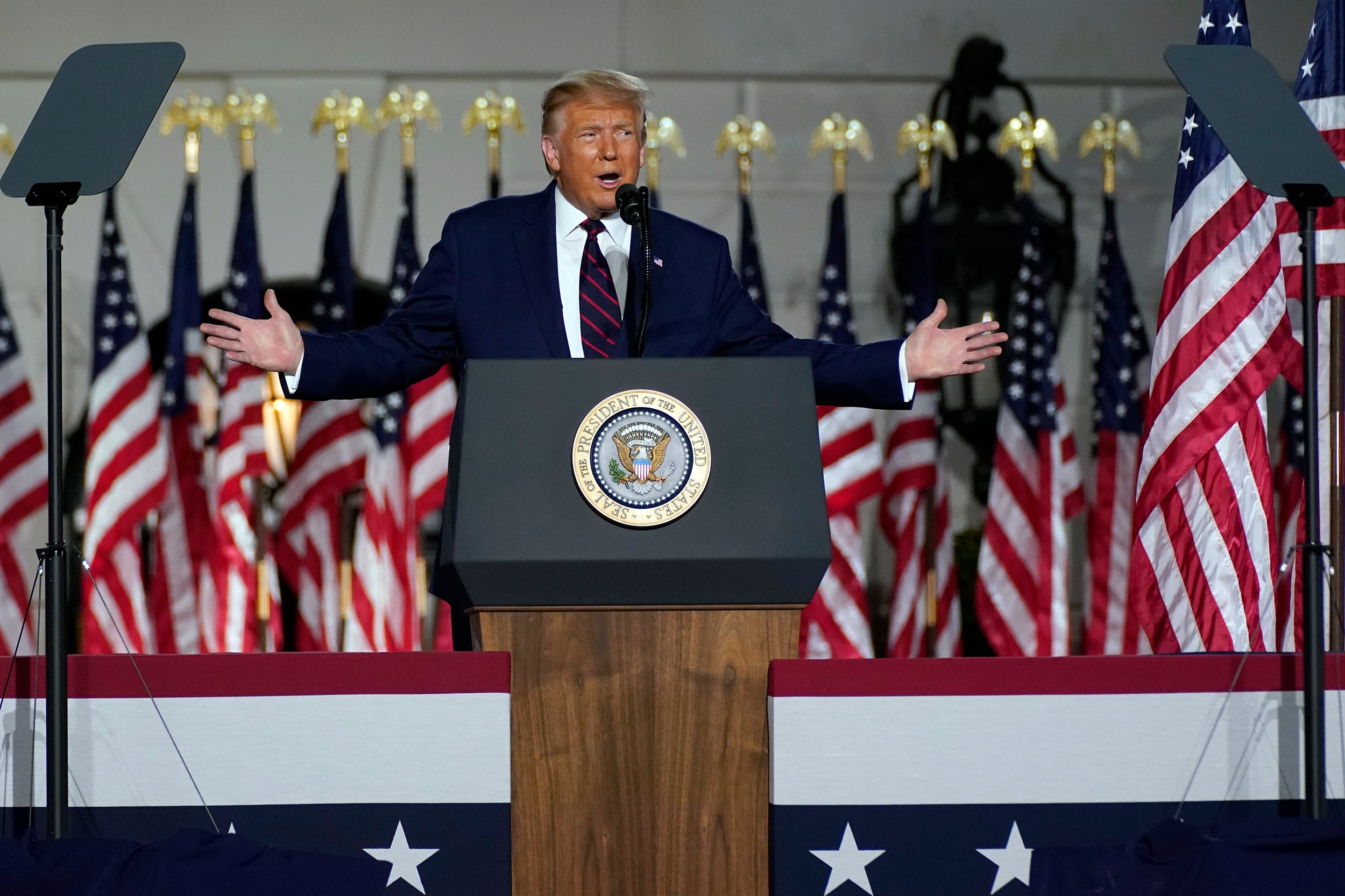 (CNN) — Standing mask-less last week at the counter of Arcaro & Genell Takeaway Kitchen in Old Forge, Pennsylvania — “Pizza Capital of the World” — President Donald Trump found himself, for the first time in a long time, in the role of retail politician.

“Why did you want to come here?” someone asked.

“Because they have great pizza,” the President replied, lifting open a box top and holding the pie aloft.

The world-altering circumstances of the coronavirus pandemic have also altered the world of Trump’s campaign. His poll numbers sank to historic lows. The charging economy that once formed the centerpiece of his reelection argument has stalled. And the arenas where his fans jammed shoulder-to-shoulder stand vacant.

It’s why Trump, who for most of his presidency has avoided interacting with voters on their turf, found himself posing with a box of steaming hot pizza on the day Joe Biden officially became the Democratic nominee.

“You look forward to the day it comes down?” he asked the pizzeria’s manager when he noticed the plexiglass barrier separating staff from customers — a COVID-era requirement in Pennsylvania and many other states for businesses to reopen. “Me too.”

If this week’s Republican National Convention offered a view of Trump’s presidency that buffed away the flaws — an alternate world where crowds gathered without masks and the pandemic was mostly referenced in the past tense — the coming days and weeks will amount to a return to Earth. Trump remains a candidate still trailing in polls, confronting a virulent pandemic and struggling to offer rationale for a second term.

The reality started setting in less than 24 hours after Trump spoke: his fireworks and opera-capped acceptance speech garnered a smaller television audience than Biden’s by more than 2 million viewers.

The next critical campaign juncture comes in a month, when Trump will face Biden for their first televised debate in Cleveland. While aides have already begun preparing the President for the showdown, it remains an open question whether he’ll adhere to their strategy — or, like four years ago, tell advisers he’s relying on instinct.

Looking at a daunting electoral map showing Trump trailing Biden in several states he won handily in 2016, Trump’s advisers are hoping a post-convention bounce will erode Biden’s steady lead and make the race more competitive heading into the fall. Trump was in a jubilant mood Friday after his speech, according to three people who spoke with him.

But Trump is entering the final stretch of the campaign in an historically bad place. A CNN poll of polls average heading into the national political conventions found 51% of registered voters nationwide backed Biden while 42% supported Trump.

Both the President and his advisers insist their data show him more competitive than public polling, particularly in the critical battlegrounds that will determine the next president. But their confidence is belied somewhat by Trump’s increasing predictions of a fraudulent election, which he says Democrats will win only through cheating.

As the general election enters its final months, Trump plans to travel several times a week for a mix of official stops and scaled-down campaign events, people familiar with the plans said.

Like Friday night’s event in New Hampshire, most will occur inside airport hangars, where attendees are partially outdoors — considered safer from a contagion perspective — and where Trump can come and go easily.

Trump’s advisers, hoping to look on the bright side, have sold the events to the President as a nimbler version of his preferred rallies that can be scheduled quickly, filled to relative capacity and allow for last-minute changes depending on the current political calculus.

Aides say he could also throw in more retail politicking of the type he practiced in Pennsylvania, though Trump himself does not particularly enjoy it and has questioned its value, people who have spoken to him said. When he visited the pizza shop in Pennsylvania, he didn’t stop to greet any voters and was gone after less than 10 minutes.

The campaign’s geographic focus over the next few weeks are states beginning to mail absentee ballots to voters, according to advisers. North Carolina begins sending ballots on September 4, and both Trump and Vice President Mike Pence plan to visit the state next week.

Several other battlegrounds — including Minnesota, Pennsylvania and Wisconsin — also begin mailing ballots more than 45 days before the election. Stops in those places are also being planned, but without the massive campaign rallies Trump once hoped to be headlining for much of the fall, advisers said.

While Trump has bitterly complained about mail-in voting, many states do not make a distinction between “mail-in ballots” and “absentee ballots.” Trump has encouraged his supporters to request absentee ballots, including in a video that showed him filling out his own ballot in Florida”s recent congressional primary.

Preparing for a face-off

Over a month out from their first face-off — set for September 29 at Case Western Reserve University in Cleveland — Trump and Pence have already started debate preparation. Both have held several sessions with a small circle of aides, people familiar with the matter said, though some said the early sessions were mostly designed to channel Trump’s attention toward the showdown, which — in the absence of major events — is now the next major campaign juncture.

Some of the President’s advisers voiced concerns that his allies were overly confident in their predictions that he would decimate Biden in the debates and were unintentionally setting the bar too high for him to claim success.

Aides were surprised that Trump agreed to start debate prep this soon. In 2016, he was notoriously reluctant to hold formal mock debates and resisted reading the binders of research compiled by aides. Instead, Trump preferred to dial up an informal group of advisers and work on one-liners for his opponents.

As he did in 2016, Trump sees the debates as the chance to shift his standing while once again trailing in multiple polls. He has still downplayed the necessity for practice debates, believing he doesn’t require them to succeed against Biden. Like in other types of preparatory briefings, he has demonstrated a short attention span and little patience for extended deliberations over strategy.

His practice sparring partner in 2016, former New Jersey Gov. Chris Christie, has participated in some of the early debate planning sessions with Trump, according to people familiar with the matter, and some of Trump’s advisers assume he will reprise the role in some fashion this year, though a stand-in for Biden hasn’t yet been formalized.

Characteristically, Pence has been more methodical in his preparation. He is holding his own prep sessions with aides, sources familiar said, as their re-election effort has struggled to find a way to successfully define Sen. Kamala Harris, the Democratic vice presidential nominee. Notably, Trump did not mention her once during his convention acceptance speech at the White House Thursday, though he did say Biden’s name more than 40 times.

While Republicans South Dakota Gov. Kristi Noem or Iowa Sen. Joni Ernst is expected to play some role in helping Pence ready for his face-off with Harris, the vice president is also expected to rely on familiar faces from the team that prepared him for his debate in 2016 with Democratic Sen. Tim Kaine. Former Wisconsin Gov. Scott Walker, who played Kaine in previous mock debates, is again expected to be involved.

The Trump campaign has requested that the candidates appear on stage with one another during the debates in hopes of thwarting any attempt to conduct the debates virtually. It’s still unclear whether there will be an audience at any of them.

Heading into the fall, Trump’s advisers describe a messaging strategy that works to extend the broad themes of their convention: framing Trump as a “law and order” president who fights to improve the lives of working Americans while also convincing voters he did not bungle the coronavirus response and isn’t a racist.

Trump’s speech on Thursday, while delivered without much energy from a teleprompter, did provide a road map for his planned attack on Biden as an empty vessel of the far-left, a characterization that took months for Trump’s campaign to arrive at and which the President himself hasn’t always stuck to.

The wide-ranging speech did not have a central theme, which aides said was because so many speechwriters were involved as well as the chief speechwriter — Trump.

Biden’s announcement Thursday that he planned to resume in-person campaign events after Labor Day also impaired one of Trump’s persistent criticisms that his rival refused to leave his Wilmington, Delaware, basement. Biden told supporters he planned to target Wisconsin, Pennsylvania, Arizona and Minnesota.

The type of voter Trump hopes to convince could be easily discerned by the convention lineup: suburban White women, working class men and — to an extent — Black men disillusioned by Democrats, though their role in the convention lineup seemed designed as much to convince White voters that Trump is not racist as it was to peel off Black voters from Biden.

“After Labor Day, you’re going to see a really aggressive campaign all the way through to the finish,” the President’s son-in-law and senior adviser Jared Kushner said this week in a Politico interview.

“We know who the swing voters are and we’ve been testing over the last six months a lot of the messages that help persuade them,” Kushner said. “Obviously times change, so you have to continue to be nimble.”

The man in the hangar

Standing before small crowds without ever leaving the airport grounds is not how Trump envisioned running for reelection. The President had long held out hope that his signature arena rallies would be possible amid the pandemic, but after an embarrassingly small turnout in Oklahoma earlier this summer he came to acknowledge that his plans would require recalibration.

The Tulsa episode proved an edifying moment for both the President and his campaign. Furious from before he left the White House until he returned late at night, tie loose and exhausted, the President emerged from the experience determined to never again find himself mocked for empty seats and entirely vacant overflow areas.

Like his South Lawn convention spectacle, Trump’s scaled-down rallies harness the images of incumbency. Crowds wait with anticipation for Air Force One to touch down, and watch as the iconic blue-and-white plane taxis into place. In some instances they watch as Trump emerges from the forward cabin and descends a set of air-stairs to his walkout song, “God Bless the USA” by Lee Greenwood.

It’s hardly the ethically dubious use of the South Portico as convention hall, but the effect remains of projecting presidential power in a way his opponent cannot. Like his predecessors, Trump often combines official and political travel, which allows his campaign to pay only a portion of the travel costs with taxpayers footing the remainder.

Being president also allows Trump to demonstrate leadership as part of his official duties, such as a trip to survey storm damage in Louisiana and Texas on Saturday and an upcoming White House signing ceremony for the normalization agreement he helped broker between Israel and the United Arab Emirates.

At the same time, Trump is holding out hope for a race-altering development: a coronavirus vaccine, which he promised Thursday could come well before the end of the year, a timeline health experts say is not realistic. Trump’s zeal to announce an effective vaccine already has medical experts concerned he will rush an unproven product onto market.

What Trump hasn’t necessarily contemplated is what a second term might look like should his efforts pay off. He’s struggled to define his second-term priorities in interviews and during his convention acceptance speech on Thursday he spent scarily any time laying out what he would like to accomplish if reelection.

People around Trump say he is superstitious about projecting beyond the election, believing it bad karma to presume victory.