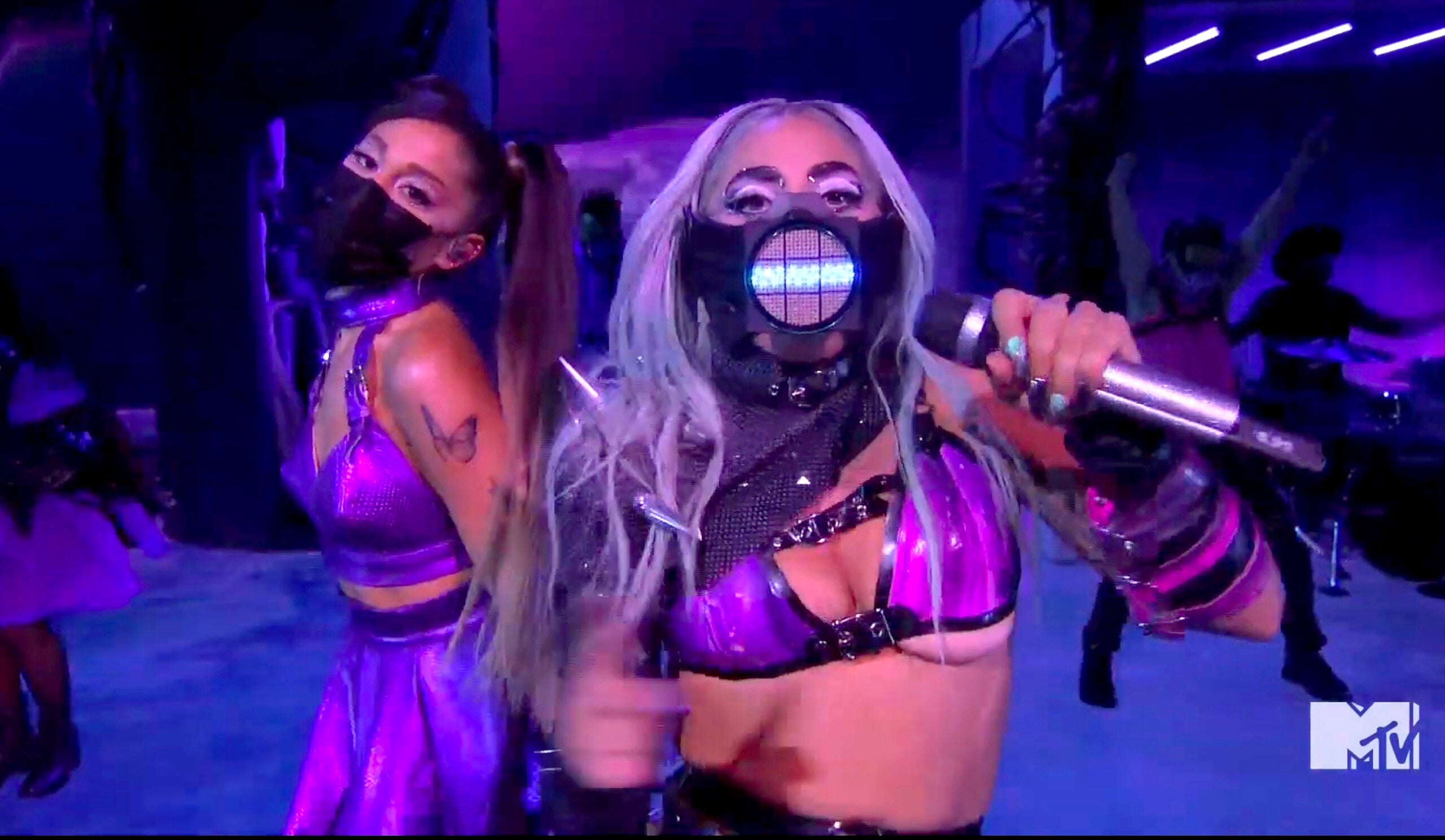 NEW YORK (AP) — With a trendy mask as her accessory — and also reflecting the current state of the world — Lady Gaga performed a medley of her songs, including the top-nominated tune “Rain on Me,” at the 2020 MTV Video Music Awards.

She was joined by Ariana Grande and number of background dancers — all wearing masks — as they performed “Rain on Me,” marking the first time the No. 1 song has been performed on TV. Gaga kicked off her set with “Chromatica II” and “911.” She played piano while she sang a slower version of the upbeat tune “Stupid Love,” then speeding the track up and dancing to it.

“I want you to love yourself, tonight and every night. Celebrate yourself, love who you are. Be kind, mask up,” Gaga said.

“Rain on Me” won the first televised award for the night, best collaboration, as Gaga told the audience she and Grande “turned our tears that felt like endless rainfalls into diamonds” while creating the track. Later in the show, “Rain on Me” was named song of the year.

“I have to say winning for best song has to be my favorite because at the end of the day, my heart is as a songwriter and I surely didn’t ask for a free ride,” Gaga said .

Gaga, who also won artist of the year, wore masks onstage while collecting all three awards.

Grande also picked up a win for best music video from home — one of two new awards MTV established as artists have made shifts because of the pandemic. She won the honor with her Justin Bieber duet, No. 1 hit “Stuck with U.” The award for best quarantine performance will be announced later.

The Weeknd, who was the first performer of the night, took home best R&B for “Blinding Lights” and took time to pay tribute to Jacob Blake and Breonna Taylor.

“It’s really hard for me to celebrate right now and enjoy this moment, so I’m just going to say: justice for Jacob Blake and justice for Breonna Taylor,” he said.

K-pop all-stars BTS won best pop, best group and best K-pop. They were top-notch during a pre-taped performance, which featured their signature, skilled choreography. The seven band members danced and sang in sharp suits, at some points with the backdrop of Times Square behind them.

Other winners included Taylor Swift, who won best direction for “The Man,” and Colombian singer Maluma, who won best Latin moments after he performed from Brooklyn.

The 2020 MTV Video Music Awards, a night highlighting music and pop culture, kicked off with heartfelt words in memory of Chadwick Boseman, as host Keke Palmer told viewers the event was dedicated to the “Black Panther” icon.

“We dedicate tonight’s show to a man whose spirit touched so many. He’s a true hero, not just on-screen,” Palmer said. “His impact lives forever.”

The Weeknd brought his “Blinding Lights” music video — where he is bruised and blooded in a red suit — to life at the top of the show. He performed the upbeat No. 1 hit on the observation deck of a New York high-rise building. DaBaby, backed by the dance crew Jabbawockeez, also performed, running through several of his hits, including “Rock Star.” During the latter track, he rapped while jumping on top of a police car, as a city burning down behind was his backdrop.

Some of the performances have been pre-taped, while others will air live across various stages in New York City. The show was originally supposed to be held at the Barclays Center in Brooklyn, but plans changed in response to the worldwide pandemic.

Gaga and Grande are the top contenders with nine nominations apiece, most of them for their No. 1 collaboration “Rain on Me,” which is nominated for the top prize — video of the year.

The Weeknd and Billie Eilish, the second-most nominated acts, are also up for video of the year with “Blinding Lights” and “everything i wanted.” Others nominated for the top award include Taylor Swift’s “The Man,” Future and Drake’s “Life Is Good” and Eminem’s “Godzilla,” which features late rapper Juice WRLD.