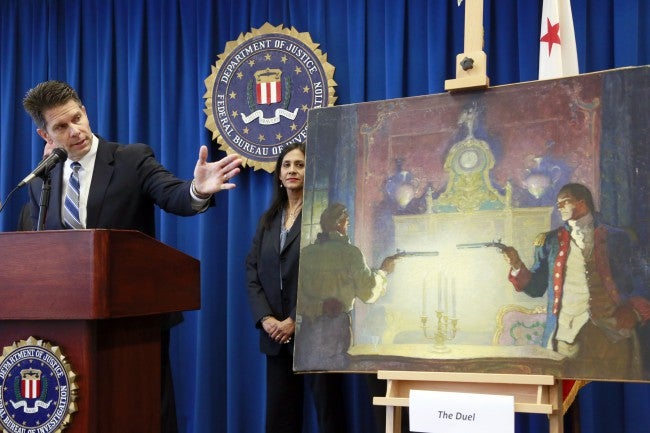 BOSTON (AP) – The FBI is offering a reward of up to $20,000 for help in finding two N.C. Wyeth paintings stolen from a home in Portland, Maine.

A total of six Wyeth paintings were stolen from the home of a businessman in 2013, and FBI Special Agent Elizabeth Rivas in Los Angeles says the person responsible for taking the paintings remains a mystery.

Four were recovered from a pawn shop in Beverly Hills, California, in December, and are estimated to be worth up to $2 million. But the remaining two were never found.

On Tuesday, the FBI announced the reward and asked for the public’s help to find the missing paintings, identified as “The Encounter on Freshwater Cliff” and “Go Dutton, and that Right Speedily.”

Three men have been prosecuted in the theft, including Oscar Roberts, an aspiring rapper who used the stolen paintings to secure a $100,000 loan from a Beverly Hills pawn shop. In April, Roberts was sentenced to more than two years in federal prison.

The owner of the pawn shop, Yossi Dina, alerted police. The shop, The Dina Collection, is featured in a reality TV series, “Beverly Hills Pawn.”

Lawrence Estrella, of Worcester, Massachusetts, pleaded guilty to interstate transportation of stolen property for transporting four of the six stolen paintings to California and was sentenced to more than seven years in prison.

Dean Coroniti, of North Hollywood, California, and formerly of Boston, pleaded guilty to possession of stolen property. He is scheduled to be sentenced in October.

FBI officials said they believe the two remaining paintings are somewhere in New England. However, David Bowdich, assistant director in charge of the FBI’s Los Angeles field office, also said the two paintings could be anywhere in the world and like other stolen art, could take decades to find.

“We are anxious to have this unique and irreplaceable artwork recovered and returned to its Maine owner,” Thomas E. Delahanty, U.S. Attorney for the District of Maine, said in a statement.

The reward of up to $20,000 is being offered to anyone who can provide information leading to the recovery of the two paintings.