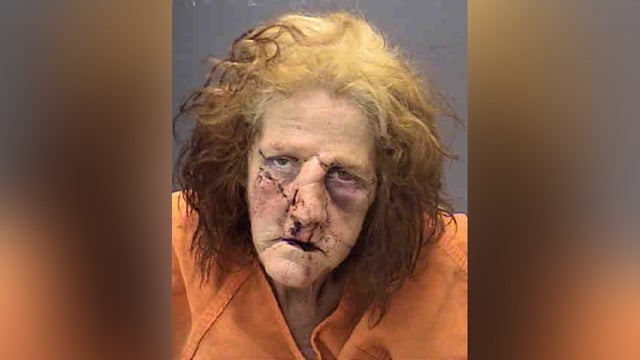 NOKOMIS, Fla. (WFLA) — A convicted felon is facing nine charges after deputies say she hit two deputy cruisers, led them on a chase and caused a head-on crash on the interstate.

The Sarasota County Sheriff’s Office says it all started when a deputy noticed 54-year-old Jacqueline Burge get into a truck outside a home on the corner of Edmondson Road and Orange Grove Avenue in Nokomis around 11 a.m. Tuesday.

An arrest report says deputies know Burge and know she doesn’t have a valid driver’s license. When the deputy saw Burge drive by him, he started following her and tried to pull her over.

That’s when deputies say Burge drove around a yard before “fishtailing” down a driveway and back toward the road, where another deputy was approaching. The arrest report says Burge hit the rear driver’s side of the deputy’s cruiser and drove away, running a red light as she sped up to about 70 miles per hour.

Deputies say Burge swerved in and out of different lanes to get around traffic on Albee Farm Road, Laurel Road and Pinebrook Road before merging onto I-75 south.

Once she was on the interstate, deputies say Burge lost control of her truck several times, hit a second sheriff’s office cruiser and then started driving north in the southbound lanes. Burge eventually swerved and hit a pick-up truck head-on, according to the arrest report.

Deputies say Burge got out of her truck and started running after the crash, but they were able to catch her and take her into custody as she was trying to get over a guardrail.

During a search of Burge’s truck, deputies found a baggy with 1.03 grams of methamphetamine, two Xanax pills, a Buprenorphine pill and two devices for smoking meth.

Burge is facing several charges, including aggravated assault on a law enforcement officer, leaving the scene of a crash involving property damage, resisting an officer and drug charges. She is being held in the Sarasota County Jail on $26,000 bond.

The sheriff’s office says she has more than a dozen prior arrests in Sarasota County, and has spent time in prison on charges from Sarasota and Manatee counties.

A sheriff’s office spokeswoman tells us the deputies who were hit are okay, and only had damage to their cars. The person who was hit head-on was also not injured.