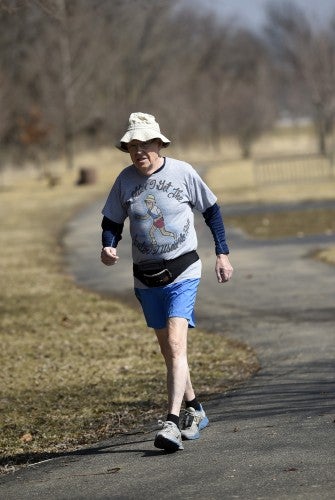 FRANKLIN, Ind. (WISH) – A Franklin man has participated in every Mini-Marathon race since its inception in 1977, and has plans to take part in 2015’s race as well.

Dr. John Gilliland, a retired obstetrician-gynecologist in Franklin, remembers when the 500 Festival Mini-Marathon race began with only 800 runners and it was 13.4 miles, almost a third of a mile longer than a traditional half marathon, 24-Hour News 8’s news partner, the Daily Journal, reports.

He’s run a gamut of temperatures through the years, through bitter cold and through brutal 80-degree races. He’s run through a variety of health issues too, from knee problems, weight issues and even bladder and prostate cancer.

Now, at the age of 82, Gilliland prefers to take a more sedate pace at the Mini. He plans on walking the 5K Race in this year’s 2015 Mini-Marathon.

He regularly trains on the Franklin Greenway Trail, usually wearing a faded T-shirt that reads, “The older I get, the faster I used to run.”

But his positivity and enjoyment of the race continues to shine through.

“(The Mini-Marathon) is the biggest in the country, and for some people that’s exciting. For me, that’s positive,” Gilliland says. “You see all these people who have been training, most of them keep their weight down. It’s kind of an encouragement.”