Greenfield firefighter who died in line of duty laid to rest 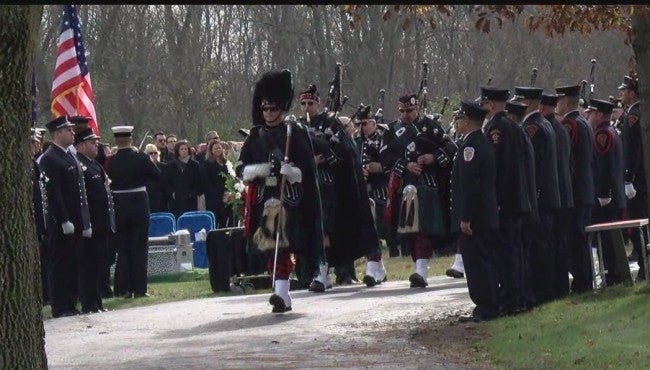 GREENFIELD, Ind (WISH) — A Hancock County firefighter who died in the line of duty was laid to rest on Friday.

Lt. Scott Compton had been with the Greenfield Fire Territory for 17 years.

Over the past couple of days, thousands have passed through city to honor him. On Friday, firefighters from as far south as Evansville paid tribute. Clearly he was a man worth celebrating, a hero.

Bagpipes played “Going Home,” the beginning of a traditional ceremony that marks the end of a life.

The beauty? An elaborate ceremony.

The procession seemed to have an endless number of cars; hundreds came out. Firefighters from around the state mourned. It was a somber but loving mood as they showed their support at Park Cemetery.

“He literally gave his life for this job,” Bratcher said.

And that’s the tragic part. Compton died on Saturday after battling a massive fire the night before.

Bratcher wasn’t just a colleague. He was a friend. Bratcher is a public information officer and was working that night.

“I had previously given a statement saying that there were no injuries and no fatalities, and the building was damaged, but other than that we were OK,” he said.

Compton went home that night and was found unconscious the next morning.

“It hit pretty (close to) home, being at the fire and then the next day hearing the news,” Bratcher said.

Compton was a volunteer firefighter. “He wanted to help his community, and I think there is a lot to be said to someone who will do this job for free,” Bratcher said.

But that cost him; his life. Compton’s casket, draped with the American flag, was pulled from a fire engine as fellow firefighters saluted him.

“He is everything that you would want in a public servant,” Bratcher said.

That public servant, now going home after a job well done. It’s a sad day, but certainly one worth celebrating.

“The loss of Scott is much deeper than the fire department. You know, the community lost a great man,” Bratcher said.

Compton’s death is the second line-of-duty death for a public official in the city of Greenfield. The police department lost Will Phillips a few years ago.

Compton’s death is the first for the Greenfield Fire Territory.

Compton left behind a fiance, two daughters and several grandchildren.