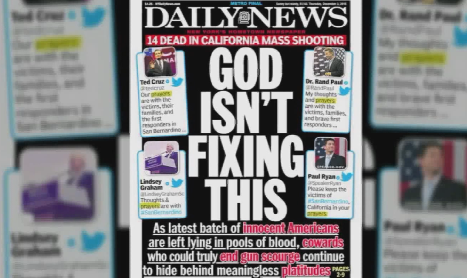 INDIANAPOLIS (WISH) – The mass shooting in San Bernardino has sparked a renewed debate over gun control with advocates of gun control saying that sympathy for the victims is not enough.

Congressman Todd Rokita offered his thoughts and prayers to the victims and families in California in a tweet. So did Congresswoman Susan Brooks, and Congresswoman Jackie Walorski.

They are all supporters of guns rights.

It’s the sort of thing that the New York Daily News took issue with in a front page headline. “God Isn’t Fixing This” it said in a loud call for new gun control measures.

Gun control advocates, including Stephanie Grabow of Moms Demand Action for Gun Sense in America, latched onto it.

“And in a moment of crisis the first thing I do is pray,” she said, “and then I get up and do something and that’s what we expect our elected officials to do is to have their thoughts and prayers with those people being affected, but then to take some action to keep the rest of us safe.”

Congressman André Carson tweeted that his thoughts are with the San Bernardino community but said his prayers are pleading for action.

“We have to have a larger conversation about our gun laws in this county,” said Carson.

The President offered his sympathies in an Oval Office statement but followed up by calling for unspecified gun control.

“We’re gonna have to, I think, search ourselves as a society to make sure that we can take the basic steps that make it harder, not impossible, but harder,” he said, “for individuals to get access to weapons.”

Indiana Congressman Marlin Stutzman fought back by retweeting a message that accused the gun control advocates of mocking prayer.

Other gun rights supporters are quick to point out that California is known as a gun control state and that the guns used in the mass killing in San Bernardino were purchased legally.

This debate is far from over.