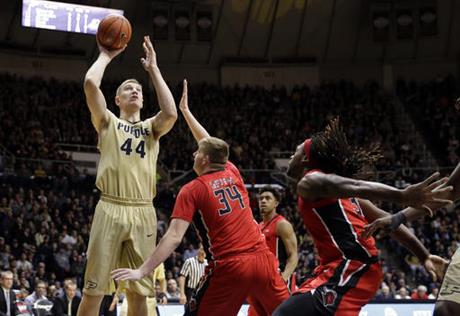 WEST LAFAYETTE, Ind. (AP) – Center Isaac Haas had 24 points and 11 rebounds, and power forward Caleb Swanigan added 12 points and 17 rebounds, and No. 16 Purdue pulled away from Rutgers 74-55 on Tuesday night.

Purdue struggled with turnovers in the first half (8) and led 33-26 through 20 minutes when Johnson was 5 of 6 from the field, including 4 of 4 from 3-point range, for 14 points, but the Scarlet Knights missed a chance to pull closer when the rest of their roster was 5 of 22 from the field.

Haas had eight first-half points for Purdue, and Dakota Mathias and Carsen Edwards each added six. The Boilermakers outrebounded the Scarlet Knights 23-10 in the first half.

Rutgers: While Johnson and Corey Sanders comprise an impressive backcourt, the Scarlet Knights lack the frontcourt strength to compete with a physical team such as Purdue, which got 36 points and 28 rebounds from Haas and Swanigan.

Purdue: The Boilermakers are 7-1 since a Jan. 12 loss at Iowa and continue to impress with a blend of interior and perimeter offense, plus great man-to-man defense when they need it.

Rutgers: The Scarlet Knights travel to Northwestern on Saturday.