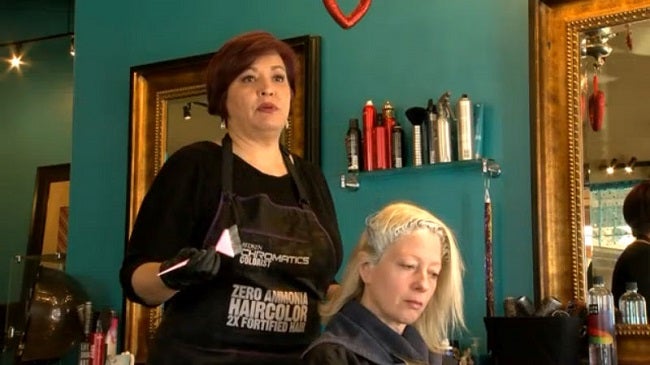 ALBUQUERQUE, N.M. (KRQE) – An Albuquerque hairdresser has been receiving the biggest tips any hairdresser in the world has likely ever seen. But there’s a problem; her customers are giving her those tips by accident, and those accidents have led to a maze of problems.

She’s made a name for herself over the last 18 years in Albuquerque, building up clientele along the way.

Warnack was named best hairstylist in 2016 by Albuquerque The Magazine.

But despite her skills, it surprised everyone when Warnack received the biggest tip she’d ever seen last August.

“I’m good but I’m not that good!” Warnack laughed.

A client swiped her credit card, chose a tip amount, and signed for the total using a popular credit card payment application.

She immediately called PayHub, the company that runs the app she uses for mobile credit card payments.

Warnack said a PayHub representative told her how to process a refund before the transaction finalized. The crisis was averted until another client came in.

“I said, ‘let’s just see if it happens to you.’ I was just joking!” Warnack recalled.

She immediately refunded the mistaken tip through the app and notified PayHub once again about the glitch.

Sanchez said she swiped her credit card with Warnack’s PayHub app, then chose a tip amount for the $80 service.

“I selected 20 percent, the button, and went ahead and signed my name with my fingertip,” said Sanchez. “It was not doubled or anything like that.”

Long after she left the salon, Sanchez woke up to a mobile alert from her bank at 4 a.m.

“Insufficient funds,” Sanchez recalled. “It does definitely make your heart stop for a minute.”

The money in her bank account was gone. Sanchez figured she was a victim of identity theft, until she saw her hairdresser’s name on the charge.

The hairdresser immediately refunded the massive tip and worked with her customer’s bank to fix the problem.

“When they give you a tip, that’s out of gratitude, it’s not expected,” Warnack said. “So then something like that takes advantage of their gratitude and it makes me uncomfortable. I don’t want people to think that I was the one putting the money in.”

After settling the problem with her customer’s bank account, it turned out Warnack’s problems weren’t over.

She received a bill from PayHub for their cut of all those transaction fees, nearly $3,000. That’s more than she normally makes in a month.

“What’s the whole point of having a refund button if you’re gonna get penalized for using it?” Warnack asked.

“The whole thing is wrong,” said Warnack. “I can’t be the only person this has happened to.”

She’s not the only one who’s had issues with a tip glitch on PayHub.

Merchants around the country reported erroneous tip amounts to businesses that use PayHub. However, SignaPay said the glitch is now fixed.

So why is Warnack being charged thousands in transaction fees for PayHub’s problem?

She said she’s been disputing the transaction fees for months.

After KRQE started asking questions, Warnack got a call Monday from a Central Payment System representative who assured her the issue will be resolved, and the company will no longer charge her transaction fees for the mistake.

Warnack has since stopped using PayHub, and now uses a different app.

Her customers aren’t holding the tip mistakes against her. Although, some clients have gone back to writing her old fashioned checks.

“I thought at the time, well I know what I spend and I’m pretty good about that,” said Sanchez.

“It does make me realize that there’s more than just yourself and the merchant that might be involved,” she added.

Warnack’s biggest tip is one for the books.

The hairdresser is still working with the IRS to fix her tax mess. Her client that left the $160,000 tip said she’s thankful she had mobile alerts set up from her bank, or she may not have caught the mistake early enough.