Hoosiers use late charge to get past Nittany Lions 76-73 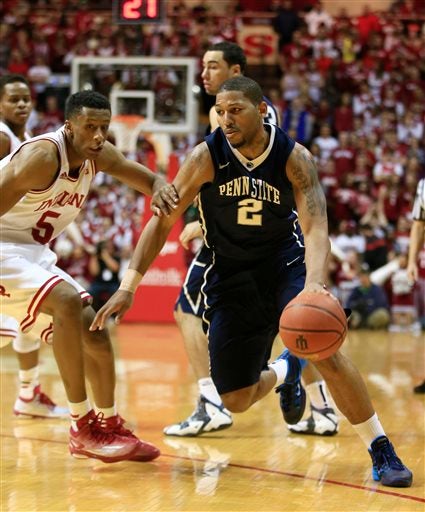 The Hoosiers (13-4, 3-1 Big Ten) have won two straight but had to survive a replay review on Brandon Taylor’s 3-pointer that would have forced overtime. Officials determined the shot came after the buzzer.

They certainly had a chance.

The Nittany Lions cut a 12-point deficit to 76-73 on Travis’ basket with 53.1 seconds to go. After a defensive stop, they took possession on a jump ball with 14.6 seconds left. But D.J. Newbill’s contested 3 from the left wing was off and after Taylor grabbed the rebound, raced to the arc and made the shot, the refs waved it off.

It looked like Indiana would put this one away early in the second half.

After taking a 39-34 halftime lead, Johnson opened the second half with a 3-ponter to give the Hoosiers an eight-point lead.

But the Nittany Lions refused to let that happen. They answered with four straight points, closed the deficit to 45-42 and then went on the 9-0 spurt that tied the score at 51.

Robinson broke the tie with two free throws following a timeout, Collin Hartman made a 3 and Williams tossed in a short hook shot to give Indiana a 58-51 lead. After Garner’s short jumper, Williams made a basket, Hartman made two free throws, Robinson put in another basket and James Blackmon Jr. hit a 3 to make it 67-55 with 7:28 to play.

Penn State charged back one more time, getting as close as three in the final minute, but they came up just short.