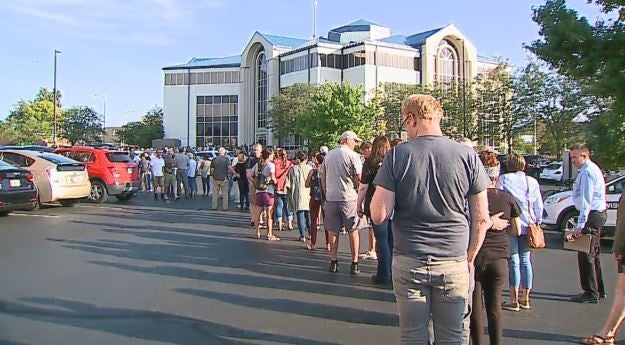 MUNCIE, Ind. (WISH) — A huge crowd of residents came out to Muncie’s City Council meeting Monday night because of two big issues: police misconduct and a steel dust recycling plant. Hundreds had to be told to go home because of fire code rules against overcrowding.

The first issue of police misconduct relates to Kristopher Bilbrey and Audie Barber. Both men recently found out from an Indiana State Police investigation that Muncie police officers had run background checks on their names even though they weren’t targets of a criminal investigation which is a “clear violation” of rules.

Bilbrey was alerted to a possible issue when he received two documented text threads to his cell phone from a phone number which he says is untraceable. Each mystery text had information that came straight from his driver’s license.

The son of Muncie Councilwoman Nora Powell ran Barber’s name the first time. Bilbrey tells WISH-TV his issues began when he submitted a Freedom of Information Act request to the city which involved communications from Powell to another city employee.

Powell said she did not direct any police officer to act on her behalf and didn’t find out about the misconduct until months later.

Muncie police chief Joe Winkle said his officers were retrained on when it’s legal to run a background check on an individual and had no further comment Monday night to News 8.

The second issue involves a steel dust recycling plant which was approved by the city council several months ago. Ever since, citizens have been mobilizing against it because they are worried about air pollution the plant will bring, particularly mercury.

Almost a dozen citizens spoke up with their concerns. At one point, it became so unruly and chaotic, the meeting was adjourned and a couple of members left.

But then the meeting was continued to allow the remaining five people who had signed up to comment a chance to give their comments.

At that point, a councilman said he agreed it was important to reconsider the approval of the plant and a unanimous vote sent the proposal back to a committee to study. There has not been a date set for the committee to meet.

For a better understanding of the meeting, click on WISH-TV’s Dan Klein who did a Facebook Live afterward.