In Indiana, a shifting abortion landscape without clinics 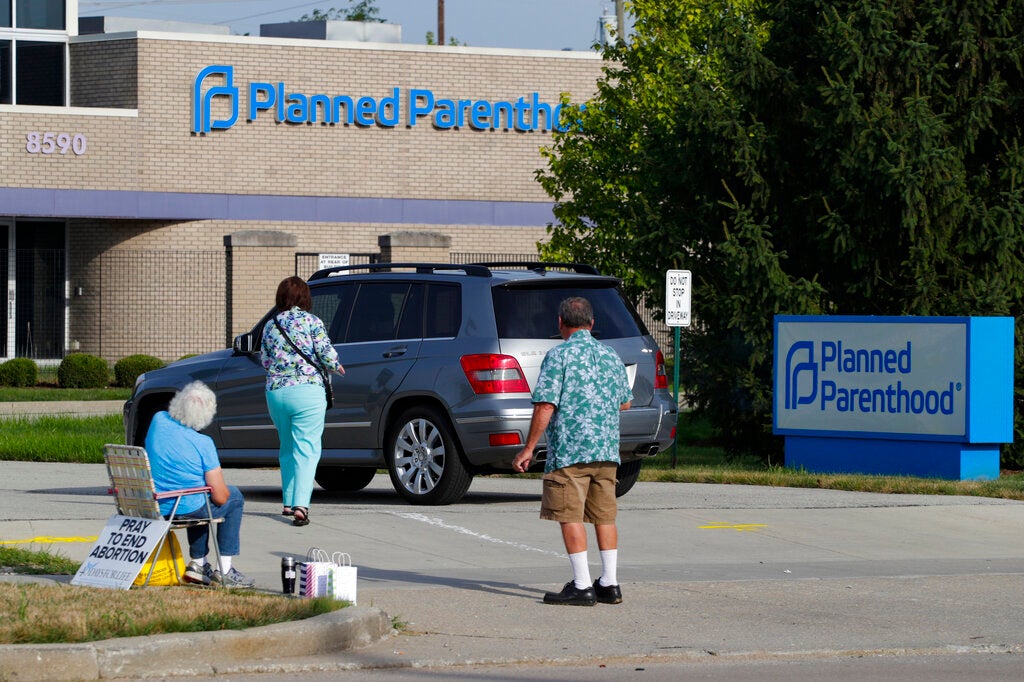 FILE - Abortion protesters attempt to hand out literature as they stand in the driveway of a Planned Parenthood clinic in Indianapolis, Aug. 16, 2019. Hospitals and abortion clinics in Indiana are preparing for the state's abortion ban to go into effect on Sept. 15, 2022. Starting Sept. 15, abortions will be permitted only in cases of rape and incest, before 10-weeks post-fertilization; to protect the life and physical health of the patient; and if a fetus is diagnosed with a lethal anomaly. The law also prohibits abortion clinics from providing any abortion care. (AP Photo/Michael Conroy, File)
by: ARLEIGH RODGERS Associated Press/Report for America
Posted: Sep 10, 2022 / 09:10 AM EST / Updated: Sep 10, 2022 / 09:11 AM EST

INDIANAPOLIS (AP) — About nine years ago, Sarah Knowlton sought an abortion at a now-closed clinic in northern Indiana, where she encountered anti-abortion protestors as she approached the entrance.

Knowlton reflected on how that experience drove her in 2019 to Whole Woman’s Health, another abortion clinic in South Bend, to train workers to take patients safely to its doors, creating a resource she wished she had years ago.

But the program — and Knowlton’s work at the clinic — will end Sept. 15, when Indiana’s abortion ban comes into force, effectively closing down abortion clinics statewide.

The ban, which has exceptions, prohibits abortion clinics from providing any abortion care, leaving such services solely to hospitals or outpatient surgical centers owned by hospitals.

“My last shift as a clinic escort is coming up,” Knowlton said Wednesday. “And I’m not ready for it.”

At Indiana University Health, which is the state’s largest hospital system, providers have been training to continue offering abortion care in the allowed circumstances.

Under the new law, abortions will be permitted only in cases of rape and incest before 10-weeks post-fertilization; to protect the life and physical health of the patient; or if a fetus is diagnosed with a lethal anomaly.

A doctor who performs an illegal abortion or who fails to file required reports must lose their medical license.

IU Health officials outlined a new 24/7 response team — which will include a clinician, an ethicist and a lawyer — that providers can contact to evaluate nuanced emergency situations.

The clinics in Indiana that will not be able provide abortion services on Sept. 15, include Whole Woman’s Health in South Bend, Women’s Med in Indianapolis, and Clinic for Women in Indianapolis.

The four Planned Parenthood clinics that provide abortion care in Indiana will do so no longer, but will continue to see patients for other medical services such as STI testing and treatment, contraception and cancer screenings, said Rebecca Gibron, CEO of the Planned Parenthood division that includes Indiana.

“Planned Parenthood has been a leading reproductive health care provider in Indiana since 1932. And we are not going anywhere,” Gibron told the AP in August.

Sharon Lau, Midwest Advocacy Director for Whole Woman’s Health Alliance, said that though the South Bend clinic will cease abortion care, patients can still access a program that directs patients to abortion appointments in other states.

“We will keep going until we’re forced not to,” she said.

Clinic for Women in Indianapolis declined to talk to The Associated Press.

Lau said her clinic’s plans could hinge on two lawsuits filed by the American Civil Liberties Union of Indiana that seek to block the abortion ban before it takes effect.

The first lawsuit, filed Aug. 31 in a Monroe County, states the ban violates the Indiana Constitution, while the one filed Thursday in Marion County claims the ban is at odds with the state’s religious freedom law, which Republicans enacted seven years ago. The timing of both lawsuits is unclear.

Mike Fichter, Indiana Right to Life CEO, said in a statement that delaying the ban would mean “the indiscriminate killing of unborn children will continue at abortion clinics in Indiana.”

“We are confident the state will prevail and pray the new law is not blocked from going into effect,” he said.

Women’s Med will also stop providing abortions after the ban but continue referring patients to states where abortion is legal until about one month after, said Dr. Katie McHugh, an abortion provider at the clinic.

McHugh said she’s seen a shift in patient behavior since the Indiana ban was passed. While some are pursuing abortion earlier, others are choosing surgical over medication abortions to avoid complications, she said.

Other patients assume abortion is already illegal, “and yet they choose abortion anyway, if that can demonstrate the desperation that people feel,” McHugh said.

Knowlton said she worries for those patients who will put their health or lives at risk if they cannot get an abortion. She knows that feeling; it was her mindset nine years ago.

“I was going to find a way, come hell or high water, whether there was a clinic I was able to access or not,” Knowlton said.