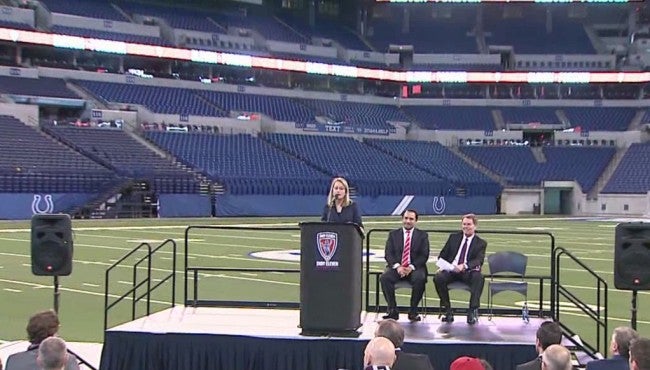 INDIANAPOLIS (WISH) — A major move is on the horizon for Indy Eleven.

The city’s soccer team will announced Monday it will play its home games at Lucas Oil Stadium. The first game is scheduled for Saturday, March 31, against Cincinnati.

Indianapolis Mayor Joe Hogsett made it official during a morning news conference: “I’m pleased to announce that this is the new home of Indy Eleven.”

But it’s more than just a venue change. If you ask the team’s owner, Ersal Ozdemir, it’s symbolic of a growing number of fans. The team recently joined the United Soccer League, a Division 2 professional league. They’ll be playing a variety of teams in the region — Louisville and Cincinnati for example. As a result, attendance is expected to go up.

“If anyone had any doubts why we’re all convinced that professional soccer will continue to succeed in Indiana, we would only have to go to a game,” said Ozdemir.

Indy Eleven got the ball rolling five years ago, in 2013, with their first season here in Indianapolis.

“The roof, the amenities, concession and the permanent bathrooms, I think they’re going to appreciate all of these amenities,” said Ozdemir.

Ticket prices will the stay the same for general admission: $15 per ticket. Season tickets will cost more, depending on the seats. Indy Eleven’s schedule is tentative, because they have to work around the Indianapolis Colts schedule.