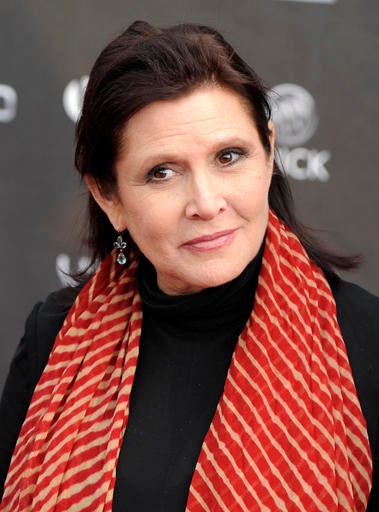 INDIANAPOLIS (WISH) — Tuesday was a heart breaking day for Star Wars fans across the globe, including those in Central Indiana.

“She was a smart woman who had a wicked sense of humor,” Downtown Comics Co-Owner Pete Kilmer said.

Kilmer had a chance to meet the late Carrie Fisher in 2015.

“If you saw her here at Indiana Comic Con a couple years ago, she was hysterical,” he said. “Everybody’s talking about the impact she had.”

He’s been a Star Wars fan since the first movie came out.

“I saw it seven times in 1977 when I was a little kid in Elhart, Indiana, “She is an early action heroine, she wasn’t a damsel, she didn’t need to be rescued, she did the rescuing.”

His love for the character, Princess Leia, and the actress herself has grown throughout the years.

He’s part of a large network of fans in Indiana who spent the day in mourning.

Those like Christina Blanch who owns Aw Yeah Comics in Muncie.

“She’s Carrie Fisher, she’s not supposed to be like the rest of us, be mortal,” she said.

As an adult, she had the experience of moderating Fisher’s Q and A session at Comic Con.

“She was gifted and talented and funny and she just wasn’t an actress, she was a script doctor and she was an author,” she said.

Blanch is grateful to have met Fisher and will continue to be inspired by her legacy.

“She did live her life to the fullest, you can say that about her, she enjoyed everything,” she said.

People now are also wondering what will come of the General Leia character since Fisher was set to film Star Wars 9 next year.

She already wrapped production on Star Wars VIII, which is set to come out next Christmas.