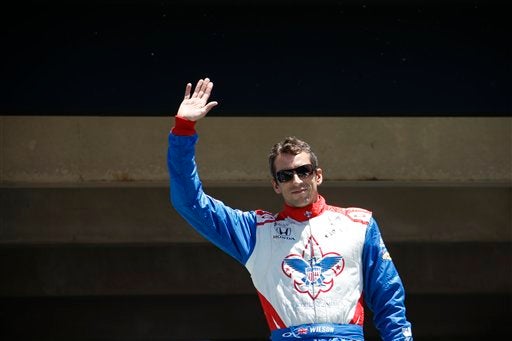 SPEEDWAY, Ind. (AP) — IndyCar driver Justin Wilson has died from a head injury suffered when a piece of debris struck him at Pocono Raceway. He was 37.

IndyCar made the announcement on Monday night at Indianapolis Motor Speedway.Scroll down in this story to watch the full announcement video.

“For me, what Justin’s gone through over the past couple years, how hard he worked to get back in the car this season and to the opportunity he had with Andretti… I think he exemplified the reason we all love this. He fought so hard to get back, and as challenging as today is and yesterday was, he’s doing what he loved to do, and what we all love to do, and it’s why we’ll all be back competing in his honor in the near future,” said Carpenter.

A memorial set up outside IMS is growing, with signs, cards, candles and notes of support from fans.

Those who knew Wilson say he was well-respected among drivers, and loved by fans and friends.

Fans have set up a memorial at IMS to honor driver Justin Wilson after just learning of his death @WISH_TV pic.twitter.com/bjkux3p5lv– Elizabeth Choi (@ElizabethChoi8) August 25, 2015

Wilson is a British driver who lived outside Denver in Longmont, Colorado. He was hit in the head during Sunday’s race by piece of debris that had broken off another car. Wilson’s car veered into an interior wall at the track, and he was swiftly taken by helicopter to a hospital in Allentown, Pennsylvania.

The last IndyCar driver to die because of an on-track incident was Indianapolis 500 champion Dan Wheldon, who was killed in the 2011 season finale at Las Vegas after his head hit a post when his car went airborne.

“Justin’s elite ability to drive a race car was matched by his unwavering kindness, character and humility – which is what made him one of the most respected members of the paddock,” said Mark Miles, CEO of Hulman & Co., the parent company of IndyCar and Indianapolis Motor Speedway.

After Wheldon’s death, Wilson became one of three driver representatives to serve as a liaison between the competitors and IndyCar. It was no surprise: The 6-foot-4 Wilson, easily the tallest in the series, was well liked by everyone in the series.

He won seven times over 12 seasons in open-wheel racing and finished as high as fifth in the Indianapolis 500. An acclaimed sports car racer, Wilson won the prestigious 24 Hours of Daytona with Michael Shank Racing, and he competed in 20 Formula One races in 2003 before moving to the U.S. to join Champ Car.

He finished third in the Champ Car standings in 2005, and was runner-up in both 2006 and 2007. To support his career, his management team in 2003 created a program that allowed fans to invest in the driver. Hundreds of people bought shares in Wilson, who was dyslexic and a strong supporter of foundations related to the disorder.

Wilson, a native of Sheffield, England, entered this season without a full-time ride. He latched on with Andretti Autosport and was in the sixth of seven scheduled races with the team. The agreement began as a two-race deal for events at Indianapolis Motor Speedway, and then was increased to the final five races of the year. The IndyCar season concludes Sunday in Sonoma, California.

Wilson finished a season-best second at Mid-Ohio in early August. He said after the race that he raced clean and did not take any risks that would have jeopardized eventual race-winner Graham Rahal because Rahal was part of the championship race and Wilson was not.

Wilson broke a bone in his back at Mid-Ohio in 2011. He missed the final six races of the season and wore a back brace for more than two months while he was restricted from any physical activity. The injury kept him out of the season finale at Las Vegas, the race where Wheldon died. He also broke his pelvis and suffered a bruised lung in the 2013 season finale at Fontana.

Our thoughts are with Justin Wilson’s family and all of @IndyCar.- Indianapolis Colts (@Colts) August 25, 2015

Wilson once said that his injuries and Wheldon’s death did nothing to change his perspective or make him question his career choice.

“You’ve got to know the risks and work out if those risks are acceptable,” Wilson told The Associated Press upon his return to racing in 2012. “To me, it’s acceptable. But I’m not going to stop trying to improve it. All the drivers, this IndyCar, we’re always trying to make it safer, but at the end of the day, it’s a race car. We’re racing hard, we’re racing IndyCars and it’s fast. When it goes wrong, it can get messy.”

In addition to his wife, Julia, Wilson has two daughters, 7 and 5. His younger brother, Stefan, is also an IndyCar driver.

With deep sadness, the parents of Justin Wilson, Keith and Lynne, his wife Julia, and his brother Stefan share the news that Justin passed away today after succumbing to injuries suffered during the Verizon IndyCar event at Pocono Raceway on Sunday, August 23.

Justin was a loving father and devoted husband, as well as a highly competitive racing driver who was respected by his peers.

The family would like to thank the staff at the Lehigh Valley Health Network Cedar Crest Hospital, Pocono Raceway, Andretti Autosport, and the Verizon IndyCar Series as well as the entire racing community for the amazing outpouring of support from fans around the world.

The family has requested that in lieu of flowers, donations be made to the Wilson Children’s Fund care of INDYCAR.

Wilson’s brother Stefan tweeted of his brother Monday, saying “He never stopped giving & caring for others. Even at this time. He had pre-chosen to donate his organs to help others in need. #myherojw.”

Another tweet from Stefan read, “I often told him, I just want to grow up to be half the man he is, as that will make me a pretty good man.”

“We’re saddened to have lost such an exceptional driver, friend and role model to many in the INDYCAR community. Justin was one of the most versatile and talented drivers of the last 15 years, as evidenced by his wins in sports cars, Champ Car and INDYCAR. More important than his driving ability was his approachable personality, his calm spirit, and the respect he earned throughout the racing community for the tremendous person, friend, father and husband he was. Justin made innumerable friends and admirers throughout the Indianapolis Motor Speedway and INDYCAR communities. All of us at IMS extend our prayers and deepest sympathy to the Wilson family.”

“Like every race fan in Indiana, our hearts were saddened to learn of the loss of one of IndyCar’s most popular drivers, Justin Wilson. Justin Wilson was a courageous driver on the track and a kind and gracious man off the track. He will be missed. On behalf of every Hoosier, Karen and I offer our deepest sympathies and prayers for Julia, his daughters and the extended family, friends and teammates of this heroic and good man.”