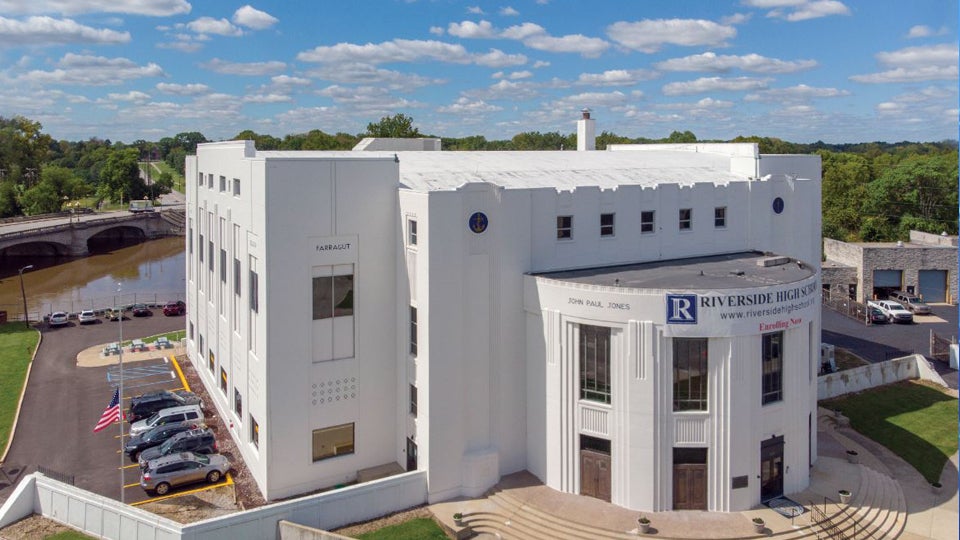 INDIANAPOLIS (Inside INdiana Business) — An 82-year-old former Navy reserve center that now serves as a charter high school in Indianapolis has been awarded the state’s top restoration prize.

The Heslar Naval Armory on the city’s near northwest side has earned Indiana Landmarks’ 2020 Cook Cup for Outstanding Restoration. The iconic white structure is now home to Riverside High School, a charter school operated by Indianapolis Classical Schools.

ICS purchased the structure from nonprofit Indiana Landmarks and launched a $10 million restoration.

The building opened in 1938 and served as a training site for U.S. Navy recruits. In later years, it was used as Navy and Marine Corps Reserve Center, but the Naval Reserve left in 2014. The building sat vacant for the next four years.

The school hired RATIO architects and Brandt Construction to return the building to its original vision. Some of the unique architectural elements were restored, including porthole windows and murals depicting naval battles.

“I truly appreciate an award such as this to lift us up, to say, ‘Look what you’re doing in this building that has so much history,’ said Indianapolis Classical Schools President Janet McNeal.

In the fall of 2020, Riverside will enroll its fourth freshman class, bringing the student body to around 600.

The restoration award will be presented in April.

“This restoration project demonstrates once again our belief that preserving a historic building isn’t just about saving a structure. It’s about giving a historic place renewed purpose within its community,” said Davis.