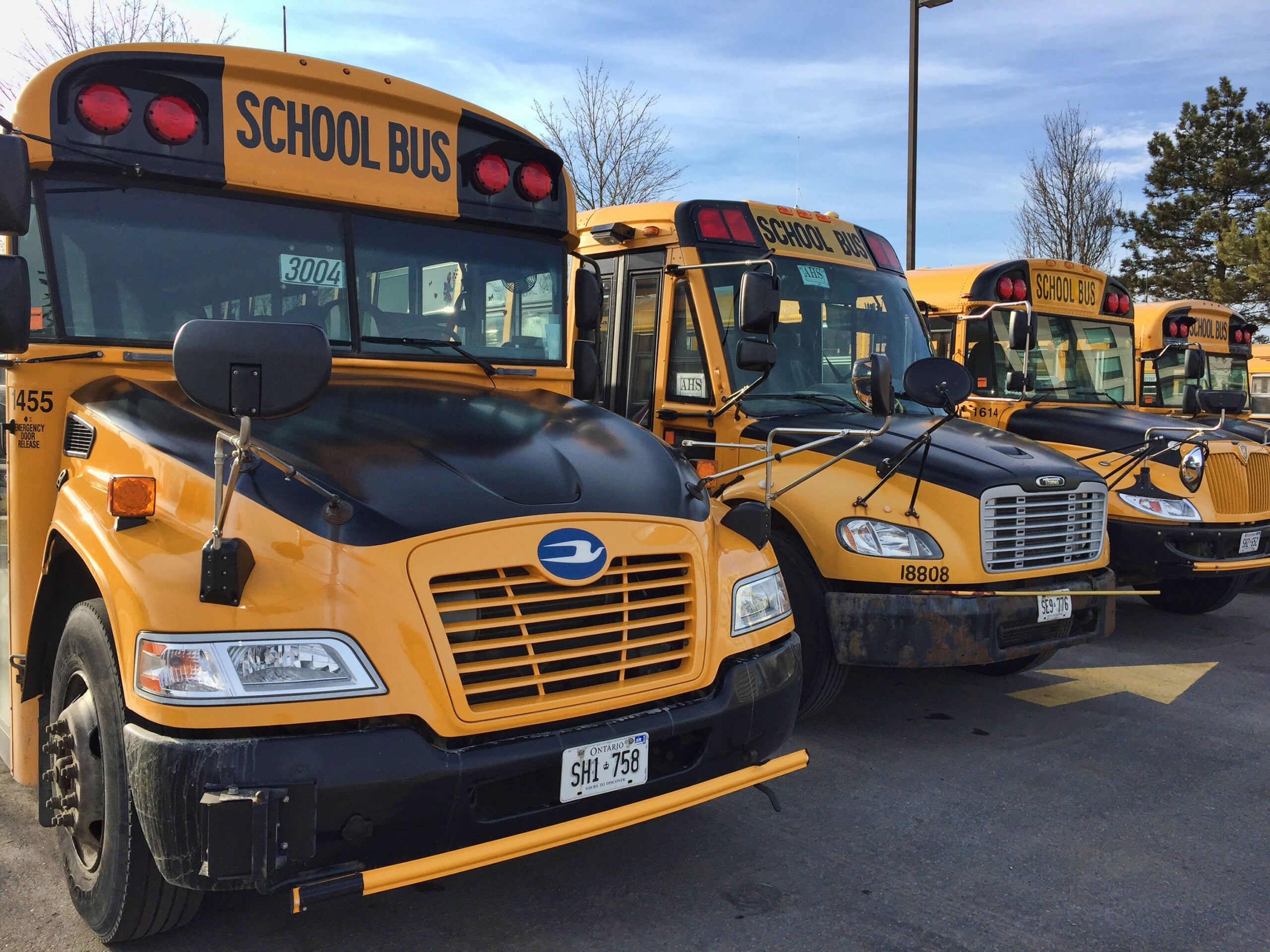 School buses sit idle outside one of several closed schools due to the novel coronavirus (COVID-19) in Toronto, Ontario, Canada on March 16, 2020. The province of Ontario announced yesterday that it is closing all schools, libraries, daycares, and community centres to slow the spread of COVID-19. (Photo by Creative Touch Imaging Ltd./NurPhoto via Getty Images)
by: David Williams, CNN
Posted: Sep 4, 2020 / 08:02 PM EST / Updated: Sep 4, 2020 / 08:02 PM EST

(CNN) — A judge in Canada sided with a mother who wants her son to attend school in person this year, despite the father’s concerns about COVID-19.

It’s the first time that an Ontario court has ruled in a dispute like this since the start of the coronavirus pandemic.

Ontario Superior Court Justice Andrea Himel issued the ruling on August 25 after hearing arguments from the boy’s parents, who are divorced and share equal custody of their 9-year-old son.

The mother argued that it was in her son’s best interest to go to school because he struggled during online learning in the spring and found it difficult to be isolated from his friends and classmates, according to the ruling.

Both parents work full-time jobs from home, but she argued that it would be difficult to supervise their son’s online learning while doing their own work.

Neither parent speaks very much French, which would make it harder for them to help their son with his grade 4 French immersion program, according to the court document.

The boy’s father agreed that he would do better in school under normal circumstances, according to the document, but said that the pandemic puts his son and others at significant health risk and could cause him emotional and physiological harm.

He wanted his son to take virtual lessons at home until the school district’s safety protocols are proven to be successful.

Himel ultimately found that it was in the child’s best interest to return to school in person.

school attendance risks. The decision to re-open the schools was made with the benefit of medical expert advisers and in consultation with Ontario school boards. The teachers’ unions and others have provided their input as well as their concerns,” she wrote.

“There are experts on all sides of the COVID-19 debate, however, the decision to re-open schools and the steps being taken to protect children and staff fall within the purview of the Ontario government.”

She wrote that there have only been two decisions in Canada regarding students’ school attendance during a pandemic — both in Quebec, where some schools reopened in May.

In one case, the judge did not let the children return to school because one parent had an autoimmune disease that would have put them at high risk.

The second case said the government should make these decisions and ordered the kids to go to school.

Himel said that the boy’s return to school would not put any family members at “an unacceptable risk of harm” because of underlying health issues. The father’s partner is scheduled to have ankle surgery at some point, but Himel wrote that that would only be a temporary issue.

She also decided to defer to the government.

“There is a consensus between the Ontario government and medical experts that, at this

juncture, it is not 100% safe for children to return to school. However, the risks of catching COVID-19 (and the typical effects of the illness) for children are being balanced against their mental health, psychological, academic and social interests, as well as many parents’ need for childcare,” she wrote.

“There is no end in sight to the pandemic and, as such, no evidence as to when it will be 100% safe for children to return to school. The Ontario government has determined that September 2020 is an appropriate time to move on to a “new normal” which includes a return to school.

She said the government closed schools in March because of the pandemic and has said that it will do so again if necessary.

Himel wrote that it would be better if parents made these decisions in mediation without involving the courts.

“I note that in this case (and in all others currently before the Court) the Mother and Father have delegated the authority to make the decision respecting their child’s in-person versus online attendance at school to me, a judge who has never met the parents and who will likely never meet the child,” she wrote. “I would encourage the parents to return to mediation as this is a process that empowers them to make these important decisions.”