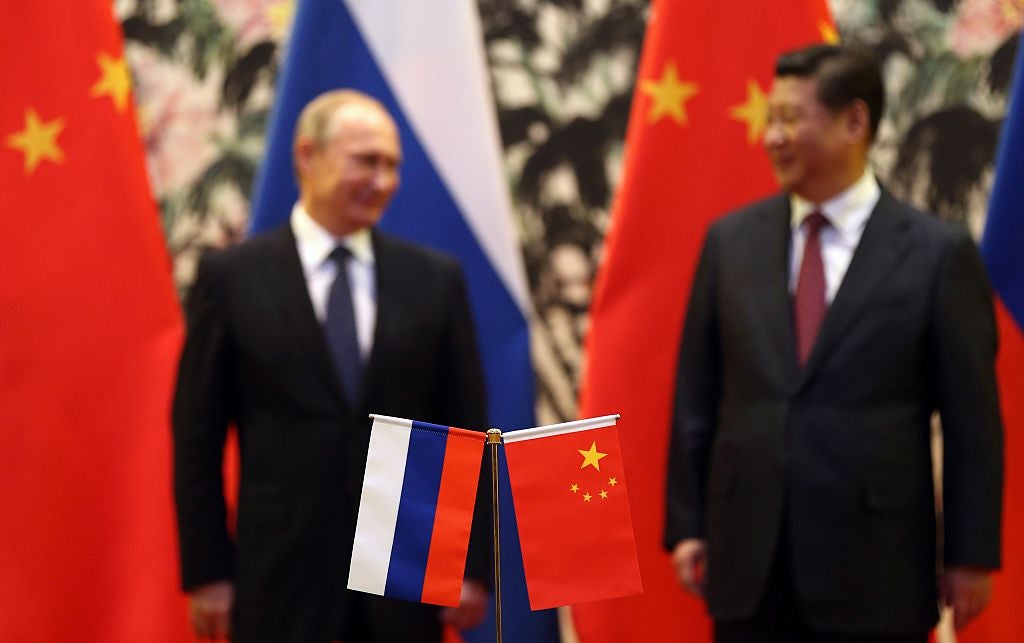 The Russian and Chinese national flags are seen on the table as Russia's President Vladimir Putin (back L) and his China's President Xi Jinping (back R) stand during a signing ceremony at the Diaoyutai State Guesthouse in Beijing on November 9, 2014. The Russian leader is in the Chinese capital to attend the Asia-Pacific Economic Cooperation (APEC) Summit leaders' meeting. AFP PHOTO / POOL / HOW HWEE YOUNG (Photo credit should read HOW HWEE YOUNG/AFP via Getty Images)
by: Brad Lendon, CNN
Posted: Sep 16, 2022 / 06:29 AM EST / Updated: Sep 16, 2022 / 06:29 AM EST

(CNN) — China’s military leaders share a potential weakness that has undermined their Russian counterparts in Ukraine and could hamper their ability to wage a similar war, according to a new report from the US National Defense University.

The report identifies a lack of cross-training as a possible Achilles’ Heel within the People’s Liberation Army (PLA), but analysts remain wary of underestimating China’s capabilities and warn against comparisons with Russia.

The report delved into the backgrounds of more than 300 of the PLA’s top officers across its five services — army, navy, air force, rocket force and strategic support force — in the six years leading up to 2021. It found that in each service leaders were unlikely to have operational experience in any branch other than the one they began their careers in.

In other words, PLA soldiers stay soldiers, sailors stay sailors, airmen stay airmen. Rarely do they venture outside those silos, the report said, noting a sharp contrast to the US military, where cross-training has been a legal requirement since 1986.

The 73-page report went on to say that this “rigidity… could reduce China’s effectiveness in future conflicts,” particularly in conflicts requiring high levels of joint-service action, and suggests PLA forces would become bogged down by the same sort of problems that have bedeviled their Russian counterparts in Ukraine, “where the overall cohesion of forces was low.”

Since the beginning of Russia’s invasion of its neighbor seven months ago, deficiencies in the Russian military structure have become plain to outside observers.

In the recent rout of Russian forces by a Ukrainian counteroffensive, Moscow’s ground forces lacked air cover, analysts say, while earlier in the war, logistical problems played havoc with Russia’s ability to resupply its forces — its trucks lacked suitable tires for the terrain and kept breaking down from a lack of maintenance.

According to the report’s author Joel Wuthnow, the PLA’s senior leaders could face similar problems due to their lack of cross-training.

“Operational commanders, for instance, rarely have career-broadening experience in logistics, and vice versa,” said the report by Wuthnow, a senior research fellow at the university’s Center for the Study of Chinese Military Affairs.

“Operational commanders who never needed to gain a high level of understanding of logistics or maintenance might fail to use those forces optimally, paralleling another Russian failure in 2022.”

In a comparison of four-star rank commanders in 2021 — such as the chairman of the Joint Chiefs or the head of Indo-Pacific Command in the United States or leaders of the Central Military Commission or theater commands in China — all of the 40 US officers had joint-service experience compared to 77% of their 31 Chinese equivalents, the report found.

It also noted another key difference: In the US, almost all the four-star commanders had operational experience. In China, almost half were “professional political commissars.”

Carl Schuster, a former director of operations at the US Pacific Command’s Joint Intelligence Center in Hawaii, said the new report “is the best assessment of where China is at and going that I have seen.”

But he cautioned against using it as a predictor of how the PLA might fare in a Ukraine-like war as it had numerous other advantages over the Russian military.

China gives better training to new recruits and no longer relies on conscripts, he said, whereas the Russian army “relies on seven-month conscripts for 80-85% of its enlisted personnel.”

And, unlike Russia, China has a professional non-commissioned officer corps, he added.

Schuster, who now teaches at Hawaii Pacific University, estimated that China is about four or five years behind the US in terms of joint operation abilities — but warned recent exercises “suggest they are catching up.”

He cited recent Chinese operations like those around Taiwan after US House Speaker Nancy Pelosi visited the island in early August as demonstrating this.

“The study’s unstated implication that the PLA may be unable to do effective joint ops is misplaced,” Schuster said.

The report by Wuthnow, who is also an adjunct professor at Georgetown University in Washington, also found demographic differences between Chinese and US leaders.

“Senior (Chinese) officers were homogenous in terms of age, education, gender, and ethnicity,” the report said.

Among the four-star ranks, Chinese officers were older on average than their American counterparts (64 vs. 60) and had more years in the military (46 vs. 40).

And one final stark difference: 58% of the US officers had served in a foreign country while none of the Chinese officers had overseas experience.

The report also noted how Chinese leader Xi Jinping has tightened his grip on the PLA’s leadership since taking control of the Chinese Communist Party in 2013.

Through his role as chairman of China’s Central Military Commission, Xi has been personally involved in the selection of senior officers, it said.

“All PLA officers are members of the Chinese Communist Party and must have enough political acumen to demonstrate loyalty to Xi and his agenda,” it said, noting that Xi rotates top officers geographically within China to prevent them from developing “patronage networks” that might one day threaten his leadership.

But it also noted that Xi has been careful to reward loyalty and patience in the senior officer corps.

“Xi Jinping has not skipped over a generation of people who had waited their turn to promote young Turks more familiar with modern conflict,” it said.

As those older officers reach retirement ages for their grade — as old as 68 for those on the Central Military Commission — their successors will bring more experience of the modern battlefield, including the newest technologies, the report said.

But the silos, reinforced by tradition and organizational culture, are expected to remain, it said.