Jade mine landslide kills at least 162 in Myanmar, with more people still missing 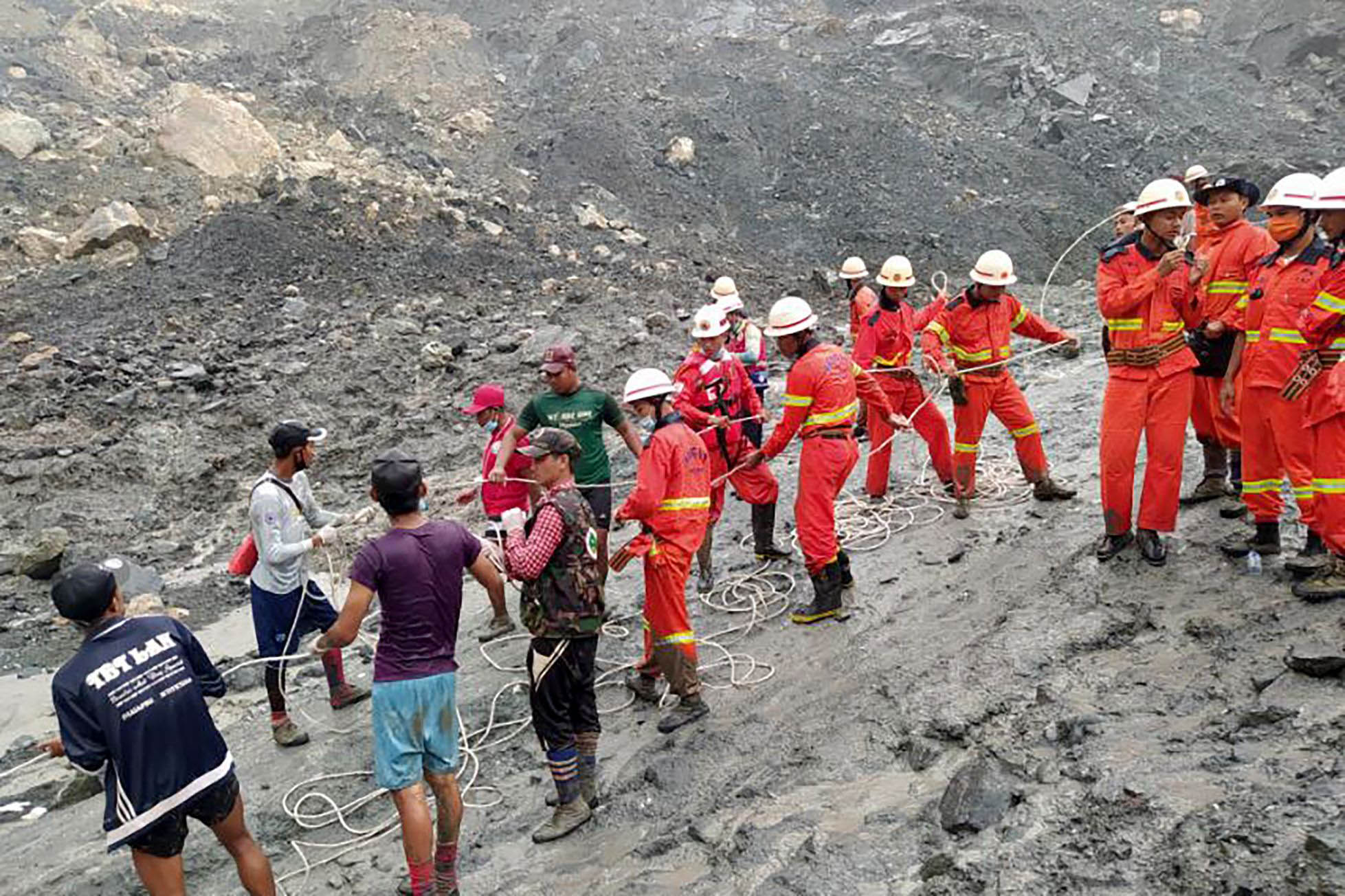 Editorial use only. HANDOUT /NO SALES Mandatory Credit: Photo by Myanmar Fire Services Department HANDOUT/EPA-EFE/Shutterstock (10699227c) A handout photo made available by the Myanmar Fire Services Department shows rescue workers searching for people after a landslide accident at a jade mining site in Hpakant, Kachin State, Myanmar, 02 July 2020. According media reports, search and rescue efforts are ongoing after a landslide was triggered by heavy rain in the area. More than 100 people dead after jade mine landslide in Myanmar, Hpakant - 02 Jul 2020
by: CNN Wire
Posted: Jul 2, 2020 / 03:25 PM EST / Updated: Jul 2, 2020 / 03:25 PM EST

(CNN) — At least 162 people have died and others are feared trapped after a landslide at a jade mine in northern Myanmar’s Kachin State, according to officials.

The landslide was triggered by heavy rain and swept through the site in the jade-rich area of Hpakant on Thursday morning.

Myanmar Fire Department said 162 bodies had been recovered as of 7:15 p.m. Thursday local time and another 54 people have been taken to hospital. Local lawmaker Khin Maung Myint warned that the death toll is expected to rise, but heavy rain had forced rescue efforts to be called off.

Images from the Facebook page of Myanmar’s fire service showed a rescue team pulling bodies out of the mud and carrying them up a steep rock face that appears to be flooding.

“The jade miners were smothered by a wave of mud, which hit after heavy rainfall,” the country’s fire service said in the Facebook post.

Footage reportedly from the incident appears to show a wave of water gushing through the pit. CNN has not independently verified the video.

The United Nations in Myanmar issued a statement saying it was “deeply saddened by the terrible loss of life due to a massive landslide at a mining site in Hpakant Township in Kachin State on the morning of 2nd of June 2020.”

It commended the “courageous efforts by the men and women involved in the difficult rescue and recovery efforts,” extended its sincere condolences to the families of the victims and wished the injured a speedy recovery.

Landslides and other fatal accidents are common in Myanmar’s gemstone mines. Located in thick, remote jungles, many of the country’s jade mines are unregulated. People working as jade pickers often labor in perilous conditions, scrambling up and down the steep hills of rubble and loose shale.

Last year, more than 50 workers were buried in a mudslide buried at a jade mine in Hpakant after a lake collapsed. In 2015, at least 113 people were killed in when a hill of tailings from a jade mine, also in Hpakant, collapsed onto the huts of sleeping workers.

Myanmar produces about 70% of the world’s jade and Hpakant is home to the world’s largest jade mine.

Jade is believed to be one of Myanmar’s most profitable exports and worth billions of dollars, fueled in large part by demand in neighboring China.

Global Witness, a nonprofit dedicated to investigating corruption and environmental abuse, estimated the jade industry was worth about $31 billion in 2014, nearly half of the country’s official GDP that year.

Exact numbers are unknown as the industry is highly unregulated, but the Natural Resource Governance Institute, an advocacy group, ranked Myanmar’s gemstone sector one of the most opaque in the world.

Prostitution and drug addiction are rife among the mining communities. Kachin State has been battling a major heroin epidemic, with many young people using the drug.

The US State Department alleged in a 2018 report that the gem mining industry in Kachin State employs forced laborers.