Intersection where bus crash happened to be inspected 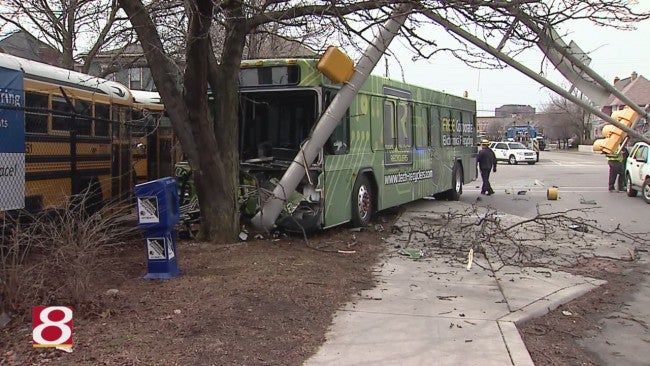 INDIANAPOLIS (WISH) – City engineers plan to inspect an intersection where an IndyGo bus went crashing off the road. And some persistent neighbors are making sure of it.

The crash happened 10th Street and College Avenue on downtown’s east side.

“We have a lot of traffic,” said Susan Smith, who owns City Dogs Grocery not too far from the intersection.

That traffic she mentioned is a problem she’s trying to put a stop to.

“There’s not enough time for everybody to go through,” she said. “We need turn signals, turn arrows and that will help facilitate the flow of traffic.”

She said she’s tried to drive the point home to the city before. About a year ago, she opened up a case with the Mayor’s Action Center, but nothing’s changed.

“You hate to have something tragic happen before somebody takes it seriously and that’s exactly what happened,” Smith said.

What happened was the IndyGo bus crash. Monday, a driver ran a red light hitting the bus, forcing it off the road and right through the street light pole.

Nobody was killed but 14 people were taken to the hospital. The light was back up and running Friday, but evidence of the crash, like broken glass and worries, was still scattered all over.

“It’s a reminder that we need to get it done,” urged Smith.

And get it done soon. Smith fears new developments, like an apartment complex being built a few blocks south on College Avenue, will only increase traffic.

That’s why she called the Mayor’s Action Center again to have the intersection inspected.

We called to check on its progress. We were told the matter has been handed off to a signal engineer, but there was no timetable on when the inspection would happen.

Smith and others hope to see traffic fly by but not so fast that it puts people in danger, not after what already happened earlier in the week.

“That was kind of a wakeup call that this is bad intersection,” she said.