Investigators: 600-800 animals at Massachusetts property; most found in squalor 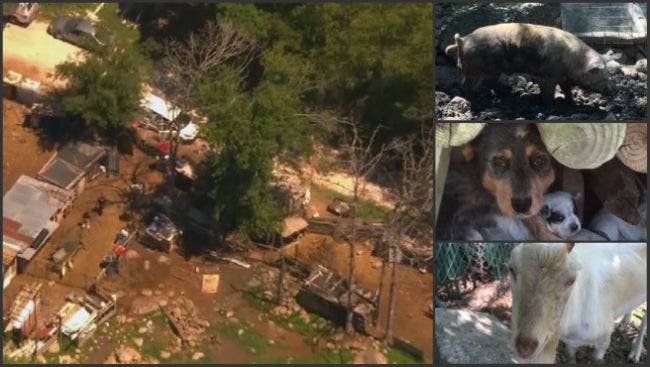 WESTPORT, Mass. (WPRI) – Police investigators from Westport and other towns spread out on a 70-acre property Wednesday off Rt. 177, known as American Legion Highway, after the discovery of hundreds of dead and injured animals in horrible conditions Tuesday night.The investigation is expected to last several days.

Officials executed a search warrant and made the discovery of the animals in the wooded property after a neighbor’s complaint last week that two Rottweiler dogs who lived on the property had escaped, and eaten the neighbor’s goats.

It’s the same property where police found animals in equally terrible conditions back in 2010, but the scale of the cruelty and conditions was not as large as it is this time, officers said. Some 60 animals had to be put down, officials said.

Several investigative vehicles were on the property Wednesday morning, removing both living and dead animals. Of the hundreds of creatures found, some were sick, some had broken legs, others were standing in their own feces, or had no food or water. The species ran the gamut: dogs, cats, birds, goats, pigs, cows, horses and more.

The parcel of land is broken into chunks and was sub-let to people. While some lots were in good condition, police said, others were not well-kept; one lot alone had 120 creatures.

The Boston Animal Rescue League has taken dozens of animals into custody. Westport Police officers said the number of animals is simply overwhelming their small department.

In the 2010 case, 13 suspects were charged with animal cruelty. Westport Police’s discovery of the property in June of that year revealed 40 dogs and numerous other animals – some in rough shape – on the property off of American Legion Highway, Rt. 177.

Police said the animals were kept on portions of the land that the owner was leasing to more than a dozen people. A police report noted that some of the dogs appeared to be living only on sweet bread, and were jammed in amid junked vehicles and other trash, with makeshift structures reminiscent of a shantytown.

Photos the officers took to document the scene showed many of the animals so skinny and bony their ribs were evident. The conditions were described by police as “a third world country,” “deplorable,” and “unsanitary”.

The animals then included pigs, horses, chickens, goats, cattle, cats, dogs, and numbered almost 500. Amazingly, most of those animals – those still alive when officials found them – survived when rescue groups took them into their care. About a dozen animals died.

Since 2014, when penalties were increased, a conviction for a charge of felony animal cruelty carries a maximum sentence of seven years in state prison, a maximum fine of $5,000, or both. Subsequent offenses can carry as much as 10 years in prison, a fine of up to $10,000, or both.