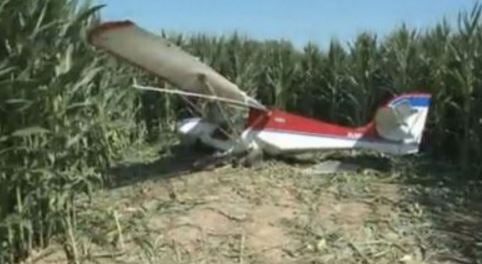 WELLS COUNTY, Ind. (WANE) – When Matt Christman and his daughter Kassi took off for a plane ride, there was no way they could predict what would happen next.

“I knew that it was inevitable for us to go down and I was just praying God, you know, please save us,” he said.

They were leaving Miller Field for their second flight of the day.

But shortly after takeoff, Christman said the plane dipped to the left side and then locked up.

He said he couldn’t correct and it kept going down.

“My daughter and I both looked at each other, you know, and we knew we were in trouble,” Christman said.

He said Kassi eventually passed out.

He then started praying, saw the top of corn stalks and the rest is a blur.

“I kept thinking it was a nightmare and trying to figure out what to do, you know. It just seemed so surreal and it didn’t seem like anything was real and I kept wanting to wake up,” Christman said.

They then hit the ground. Christman said his phone was on his lap.

He got Kassi out and called 911. Not long after, emergency crews were on scene.

Kassi was air lifted to the hospital and he was taken in an ambulance.

“I can’t thank the firemen enough. I mean I’m on a volunteer fire department myself and I’ve never been in the reverse situation,” he said.

Today, they’re battling injuries but are in recovery, and in shock, thankful to be alive.

“God was with us. I mean you don’t normally get a second chance after this. So I’m just really thankful,” he said.