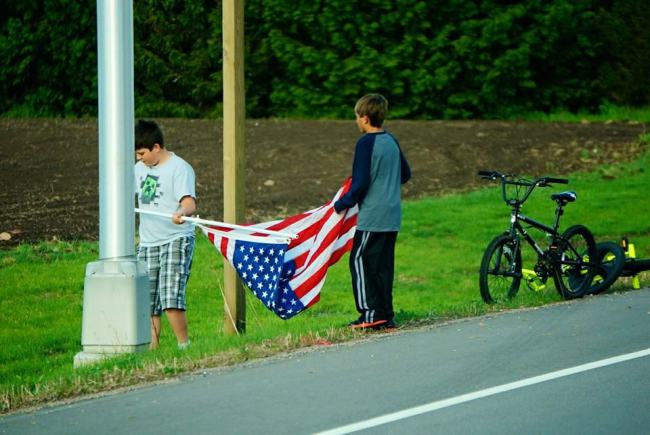 Twelve-year-old Parker Diemel and 11-year-old Ayden Lengo didn’t have any plans to celebrate Memorial Day. They were just happy to get off school and ride their bikes. But while they were riding the streets of Navarino, which is lined with American flags, they saw one had fallen down.

“Why’s that on the ground? It’s the American flag. It’s a symbol of our country,” says Parker. “We’d have to pick it up of course.”

“Of course,” says the 12-year-old. It’s that matter-of fact patriotism that inspired a passerby to take a picture of the boys, picking the flag up out of a ditch.

Ayden says, “We needed to treat it with respect and get it to wherever it needs to go.”

The man posted the picture on Facebook, which is the only way Parker and Ayden’s parents found out.

Ayden’s mom, Cara Krull, says, “I feel great. He’s a great kid and I’m glad he knew that that American flag is something he should be proud of and take care of.”

“Not til this morning when Parker comes up to me at the bus stop, showing me all these likes, and I was like ‘wow!'” says Ayden.

The picture got almost two thousand likes, three hundred shares, and a long list of praise by the next morning.

“They were saying nice comments and veterans were saluting me and Ayden, so that was pretty amazing,” says Parker.

Kevin Conradt, Navarino Town Chairman, says he’s proud to have such wonderful kids growing up in Navarino: “People desecrating the flag and the protest and the riots and the stuff that’s going on. It’s really nice to see some young kids stepping up to the plate.”

Parker’s mom, Lisa Diemel, adds with a laugh, “Both are very good kids and it just shows that we’re doing something right with them.”

While the flag is out of their hands now, Parker and Ayden say they’ll continue their responsibility to look out for their country.