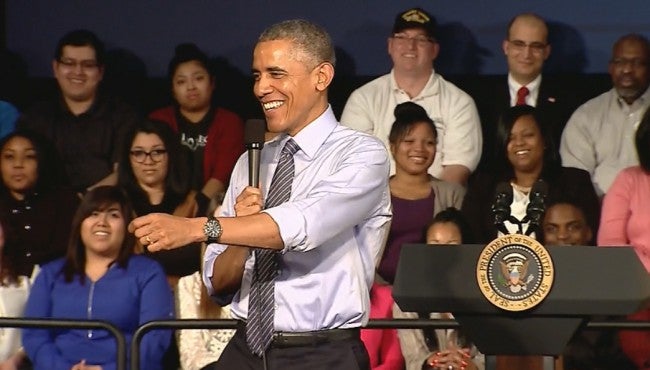 INDIANAPOLIS (WISH) – President Barack Obama visited Ivy Tech Community College in Indianapolis on Feb. 6.Click play in the video player to hear his entire speech, and read it in its entirety below.

In his address to the crowd at Ivy Tech, he defined what he believes middle class economics is.

“The idea that in this country, everybody does best when everyone’s doing their fair share and everyone’s got a fair shot and everyone’s playing by a fair set of rules,” Obama said.

In addition to his speech, Obama answered audience questions. Watch that video here:

During the question-and-answer period, Obama was challenged to a one-on-one basketball game against Fever star Tamika Catchings. Read and watch more about that here.

Full text of the president’s remarks and transcript of the question-and-answer period, provided by the White House: