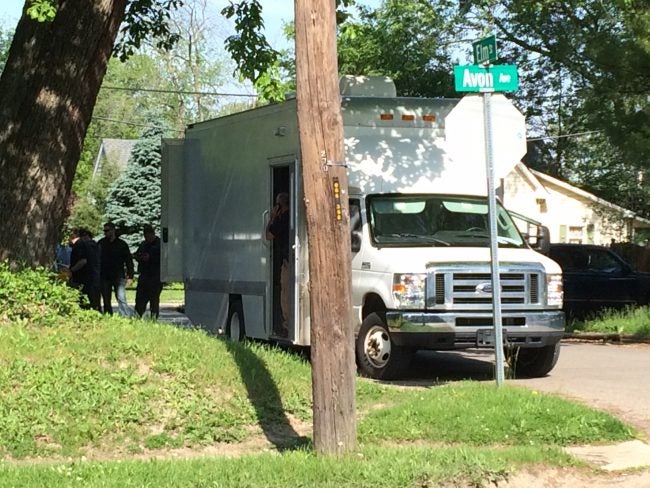 According to a statement, the agencies say these are criminal investigations in Plainfield. However, the statement did not share what the nature of the investigation was about. Sources within the Town of Plainfield told 24-Hour News 8 the investigation is related to online threats made against the community in late 2015.

Neighbors on Avon Avenue witnessed the activity firsthand. While it was quiet and calm when our crews arrived, neighbors said the investigation started with a bang.

“Even asleep, it sounded like someone going 40-50 miles per hour into somebody’s living room, or like a small bomb of some sort,” Plainfield resident Chelsea Ream said. “It was massive.”

Agents and officers were on Avon Avenue for five hours. They were seen loading a FBI vehicle with bags and computers. It was a sight that bothered Ream.

“Emotion-wise, it’s crazy because you don’t hear much about Hendricks County, it’s usually east side, or something like that,” Ream said.

In December, the community was rocked by threats against shopping centers and schools. Danville was also the recipient of threats.

Police continued to work the case into 2016. At a community forum discussing the threats, even more threats were made. Local law enforcement, along with the FBI, have not been able to crack the case.

This is the second time the investigation lead them to Avon Avenue. In January, officers questioned a student who lived in one of the homes.

“I’m not liking it,” Plainfield resident Susie Pilnock said. “This is a quiet street. These are family-oriented people, older people.”

On Tuesday, 24-Hour News 8 spoke with people who live inside the home that was raided five months ago.

“The attention that was brought to us caused us a lot of stress and a lot of grief,” the woman said. “And a lot of resentment and a lot of people who we thought were our friends, we found out weren’t.”

She also expressed hope Tuesday’s raid would bring an end to the cyber threat investigation, a statement agreed by anyone we spoke with along Avon Avenue.

“I panicked there for awhile,” Ream said. “I had to call my dad and my grandpa, and they said, ‘I believe they’re going to take care of it.’ As a mother, we were all freaking out for a little bit.”

“It’s making me feel better that they’re maybe finally going to get to the bottom of it,” Pilnock said.

The owner of the home spoke to WISH-TV by phone. She was unaware of the raids Tuesday morning, and said the home is rented to a multiple tenants.

The Plainfield Community School corporation released this statement on the investigation:

We are aware of criminal investigative activity in Plainfield this morning, related to the cyber threats that began in December. Today’s activities in no way affect the celebrations, finals or any business going on in our schools. Students are safe and we are proceeding with normal schedules and procedures.