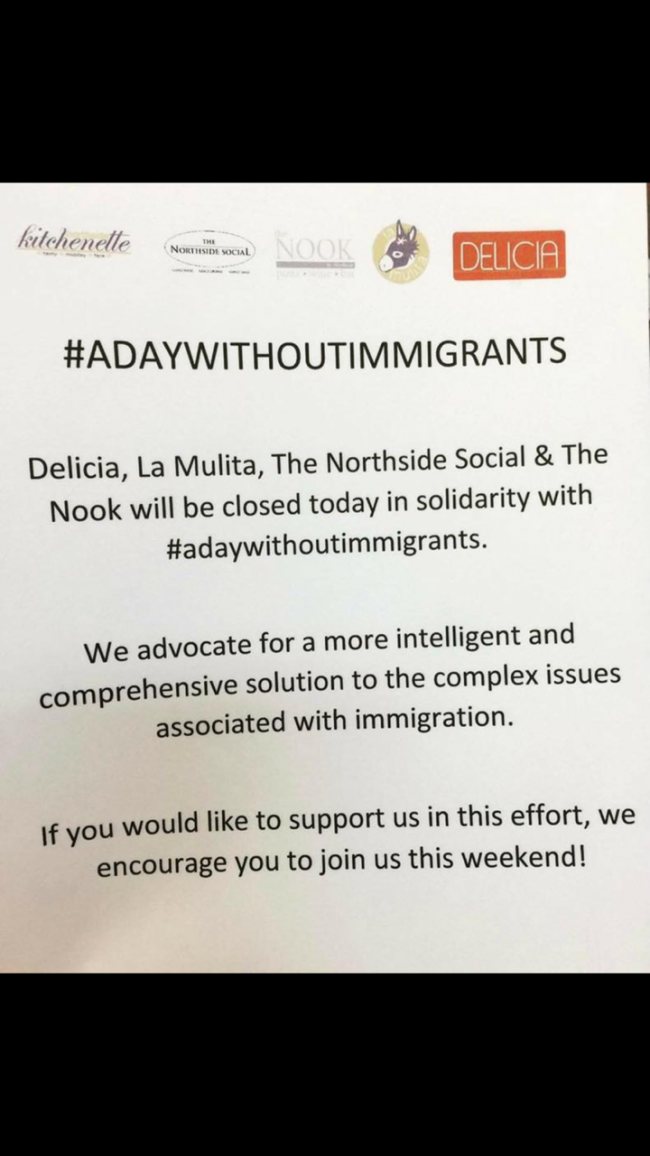 INDIANAPOLIS (WISH) – Across the country Thursday, grassroots “A Day Without Immigrants” protests were held.

A local restaurant owner closed four businesses in solidarity with their employees.

The owners of Delicia, La Mulita, The Northside Social and The Nook said some employees told them they weren’t showing up, so the owners closed it’s doors.

Meanwhile immigrant advocates say all they want is respect.

“I want to say that I’m proud to be Latin, because I know my people work really hard,” said Elizabeth Juarez, while holding back tears. “It’s really sad that these people are just not recognized for their effort of making this country better.”

Juarez is the owner of Master Group Auto Center located in the International Marketplace neighborhood.

A native of Mexico, she’s been in business for 20 years. She says her main customers are Latinos, until recently.

“People are scared now to invest,” she said.

She says they used to sell 60 cars a month, now maybe they’ll sell 20.

“Everything that they have here as far as their family and dreams are falling apart right now because they’re scared,” she said.

According to a report from the US Census Bureau, nearly six percent of Indiana’s workforce are immigrants. Two percent are undocumented.

In the restaurant industry, immigrants accounted for 7.1 million of the nation’s restaurant workers in 2015.

“We have a nice ‘we are the world’ reference going on within our company because we have people from all walks of life,” said Nicole Harlan-Oprisu, a manager at Delicia restaurant.

The restaurant and neighboring La Mulita closed Thursday in support of all their workers.

“It feels amazing to have that support. That’s all I can say,” said Ricky Martinez, the executive chef at Delicia.

“It’s something that we’re choosing to do to support the staff,” said Harlan-Oprisu.

In a wide-ranging news conference Thursday afternoon, President Trump didn’t talk about the walkouts, but said he’s working on how best to deal with the children who were brought to the country by undocumented immigrants.

“It’s a very, very tough subject. We are going to deal with DACA with heart,” he said.

However those in the restaurant industry say without immigrants dinner wouldn’t be served.

“Getting seeds in the ground to on somebody’s table, be it at a restaurant or at their home, immigrants play a part in every single part of that process,” said Harlan-Oprisu.

In terms of financial impact, a report from the Perryman Group says if all unauthorized immigrants were to leave the Indiana, the state would lose nearly $3 billion in economic activity and nearly 18,000 jobs.