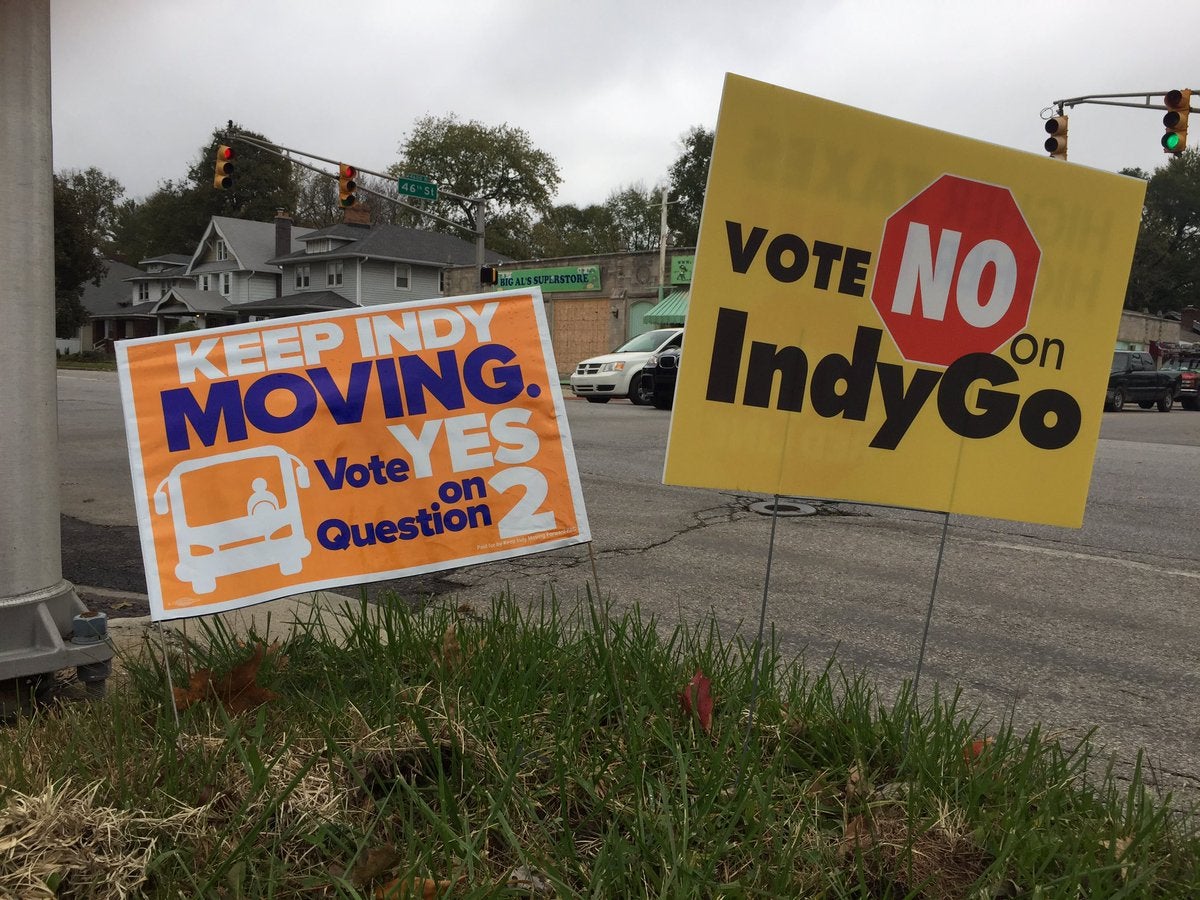 INDIANAPOLIS (WISH) — As voters prepare for the upcoming election,  24-Hour News 8 is looking at the future of public transportation in Indianapolis. Public transit is one of the most controversial issues on the Marion County ballot.

On Tuesday, voters will decide on a potential 0.25 percent tax hike to fund improvements and expansions to the mass transit system.What is the Marion County Transit Plan?

The first phase of the Red Line would connect Broad Ripple and the University of Indianapolis. The Blue Line would take riders from Cumberland to the Indianapolis International airport and the Purple Line would run from Lawrence to the downtown transit center.

“Ultimately, the plan will help us better serve the community and create better access to jobs, health care and education in Marion County,” said Bryan Luellen, an IndyGo spokesperson.

Many people who regularly use the bus system in Indianapolis complain that it is unreliable and inconsistent.

“The system has never really gotten people to where they need to go…it just needs to be better, all the way around, like other major cities,” said Peggy, who rides a bus daily.

“Imagine if your garage door only opened once an hour and that was the only time you could get your car out of the garage. That’s what it’s like with the bus stop  that only comes once an hour,” said Miller.

“The hours of service, the lack of frequency and the lack of weekend access really impede folks’ ability to get to work — to have options to go to church on Sunday and pick a good grocery store. There is so much that’s tied to people’s access to transportation,” said Luellen.

Miller said Indianapolis needs the transit upgrade to attract more people and businesses to the city.

“People want that freedom and that mobility. When we don’t have it as a city, we fall down a couple tiers or many tiers. We don’t compete well with other cities,” said Miller.Not everyone thinks public transit will move Indianapolis in the right direction.

“We have other needs in our city — schools, fire, police, our roads — transit isn’t the priority for us,” said Erin Tuttle with Stop the Red Line, a group fighting against the transit plan.

“The truth is, Indianapolis is a very convenient city to drive around in. You can get a nice home fairly close to the city with a very short commute time. Unlike Chicago, where home prices are more expensive and commute times are longer. Transit works there,” said Tuttle.

Councillor Miller said he’s concerned about the people in Indianapolis who cannot afford a car.

“If we don’t help people who can’t afford to get there [to work] on their own, well we’ve taken away a lot of options for them. There’s not much else for them to choose. I don’t like the alternative. We’ve got to address poverty in our city, poverty is huge in our city and this is a major way to address poverty,” said Miller.

“I’m voting ‘yes’ because the people who work late shifts need to be able to get home and have reliable transportation. 11:45 p.m. is just too early for the buses to stop, especially on the weekends,” said Peggy.

IndyGo said the new system upgrades will give people access to more jobs.

“Without a better transportation network, Indianapolis residents are going to continue to have limited options. Therefore limited opportunities to escape poverty,” said Luellen.

Tuttle doesn’t think the current transit plan will benefit the people who need reliable transit the most. She questions why the city’s first BRT line will run through Broad Ripple.

“There’s not a real demand for it here. There is a demand for it in other areas that need that transportation. It’s a little bit disheartening to think that this neighborhood is going to get the first bus rapid transit line, when people here have a choice. They have a car and they can choose to take transit or they can choose not to, but there are other areas that do not have that choice,” said Tuttle, “We think the option should have gone to them first if they’re going to do it at all.”

“This plan is not well suited for Indianapolis. It is not serving transit dependent people as it should, it has possible fare increase and it’s going increase congestion for auto travelers,” said Tuttle.

Miller agreed keeping fares low should be a priority.

“IndyGo hasn’t adjusted our fares since 2009, and we’re looking at the fares regardless of what happens with this plan. The plan doesn’t propose a direct fare increase,” said Luellen.

If the BRT lines take up a lane of traffic, some people worry it will mean headaches for drivers like congestion and less parking. Advocates say those issues won’t last long, as people stop driving cars and start taking transit.

“We keep building wonderful apartments, but then we build parking garages that take up space that could have been used for something else. When we get to this point that we don’t need one spot for every person that lives in a unit, that’s a good place to be. It hurts us as a city when we have to spend so much money and real estate on parking,” said Miller.

Tuttle doesn’t think the answer is that simple.

“That’s sort of a fingers crossed kind of an answer. That’s a real hopeful idea that people are going to give up their cars and they’re going to take transit,” said Tuttle.

“We’ve done detailed traffic analysis for phase 1 of the Red Line, and if the referendum is approved we can move forward with the Blue and Purple lines. We would continue to do the detailed analysis,” said Luellen. “The red line actually won’t make congestion worse on any of the streets. There’s a good connected street grid in that area,” said Luellen.

Both sides agree Indianapolis is at a crossroads.

“We just think IndyGo needs to go back to the drawing board and come up with a different plan that is affordable, one that the city can afford — and one that is going to serve the most people, particularly those who need it the most,” said Tuttle.

“It’s one of  those  things that if we don’t do it now, we fall so far behind that you have to wonder if we’re going to have a public transit system.  That scares me a little bit.” said Miller.How is the Red Line connected to the referendum?

The Red Line will be Indianapolis’ first bus rapid transit line. The first phase, connecting Broad Ripple and the University of Indianapolis, is happening whether the referendum passes or not.

Miller said he expects his district to approve the referendum. If the referendum passes citywide, but not in Miller’s district he said he’ll discuss the issue further with his constituents.

“I would have a really tough decision then. I will probably break it down by precinct to see where — which neighborhoods did not feel like his was supportive for them. I’ll go to them and talk to them… I’ll see then if there was maybe a misunderstanding. But at the end of the day, I have to abide by what my district wants. I really hope that either they pass it outright, or upon more discussion we get to a comfortable place,” said Miller. “I was hired by the people in my district to represent them and ultimately that’s what I have to do.”

You can read more about the Marion County Transit Plan here. You can learn more about Stop the Red Line here.