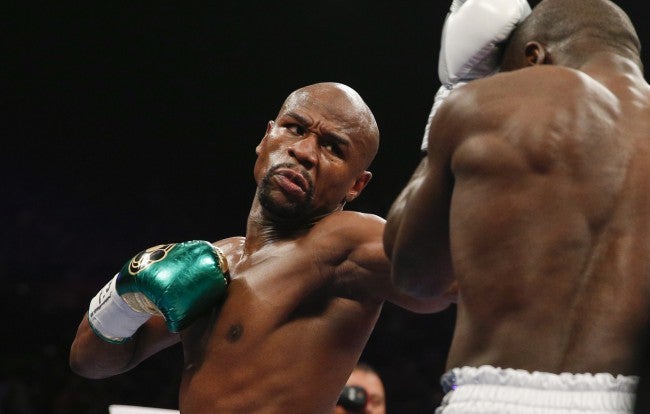 LAS VEGAS (AP) – His career winding down to its final seconds, Floyd Mayweather Jr. took a victory lap around the ring, his fist raised in triumph.

After 19 years of perfection in the ring, he deserved one final bow.

Mayweather capped a remarkable career with a typical Mayweather fight Saturday night, using his defensive wizardry to frustrate Andre Berto on his way to a decision so lopsided one judge gave him every round.

The $32 million he earned was pocket change compared to what he got for Manny Pacquiao in his last fight. But the more important number was win No. 49 in the final fight of his unblemished career, tying the mark of the late heavyweight champion, Rocky Marciano.

“You gotta know when to go. I’ve had a great career,” Mayweather said. “I’m leaving with all my faculties. I feel like I’m smart and sharp.”

Mayweather wasn’t about to change what he does best in his last fight.

Both dominant and defensive, he used all the tricks learned in a pro career that began in 1996 to take a unanimous decision over Berto and retain his welterweight titles in what he insists was his final fight.

Mayweather won yet again in a fight where he was chased but never really tested. He piled up points with a sharp jab and quick counter punches, leaving Berto swinging at air most of the night.

“What can I say, I was the better man tonight,” Mayweather said

By the late rounds, Mayweather was both talking to Berto (30-4) and taunting him, secure in the knowledge he was winning big against the 18-1 underdog. In the final seconds of the fight he took a victory lap, as the crowd of 13,395 stood and cheered at the MGM Grand arena.

The ringside scorecards reflected Mayweather’s dominance, with one judge scoring a 120-108 shutout. The other scores were 118-110 and 117-111, while The Associated Press had Mayweather winning 119-109.

Mayweather added to his pay-per-view riches once again, and once again he didn’t seem to have to work too hard to make it. Berto, who had lost three of his last six fights, tried to make it a fight but his punches were wide and mostly missed their marks.

“I pushed him to the limit,” Berto said. “But he was just better.”

Mayweather did what he’s done best in his long career, fighting defensively and picking his shots against Berto. He was especially effective when Berto rushed at him, using his counter punching skills to keep Berto away.

It was a winning combination once again, just as it had been in his 48 previous fights.

Mayweather had vowed to give fans an action fight in his last bout, after being criticized for fighting defensively in his win over Manny Pacquiao. He did trade punches with Berto on several occasions, but never stayed in the pocket long enough for Berto to find his mark.

Mayweather complained to his father in the corner during the fight that he hurt his hand, but said since he is retiring it didn’t matter.

Ringside punch stats showed Mayweather’s defensive wizardry. Mayweather was credited with landing 232 of 410 punches, while Berto landed only 83 of 495.

“I was in great shape but it was difficult to fight him,” Berto said. “He was really, really slippery.”

Mayweather weighed in at 146 pounds, a pound more than Berto.

Mayweather, in his 26th title fight, controlled the action all night, now allowing Berto to land more than one punch at a time. He was never able to hurt Berto, though, and passed up chances to engage him in exchanges.

Berto was surprisingly passive early, doing little in the opening rounds but throw punches that hit nothing but air. He picked up the pace beginning in the fourth round, but Mayweather had little trouble ducking and moving away from his wild punches.

By the 10th round were talking so much trash that referee Kenny Bayless called a halt to the action and told both fighters they needed to shut up.

If Mayweather retires it will end a career that saw him become a pay-per-view star and earn more money than any boxer before him. Though most in boxing believe he will some day fight again, the 38-year-old said he had plenty of money and his health is more important than chasing records.

“I’ve accomplished everything,” Mayweather said. “I’ve done everything in my sport.”