Monserrate Shirley: ‘I did everything to make him happy’ 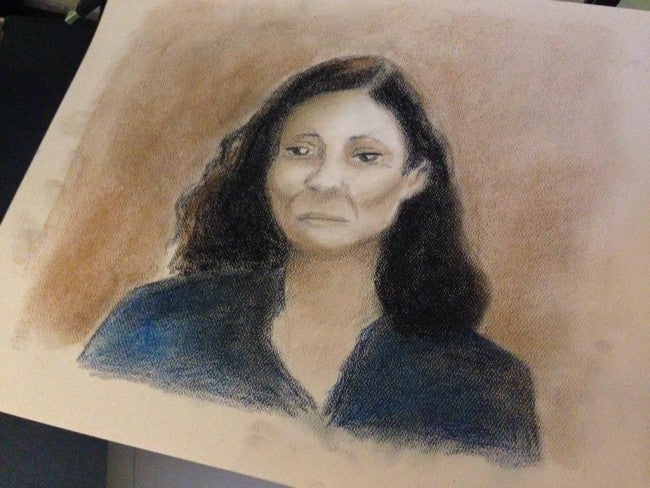 SOUTH BEND, Ind. (WISH) – Monserrate Shirley told jurors Wednesday she would do anything for Mark Leonard, because she was in love with him.

Monserrate Shirley agreed to testify against Mark Leonard as part of a plea agreement to reduce her potential prison time.

Shirley spent hours on the stand. The entire day she answered questions from attorneys, repeatedly crying. She came into the courtroom looking much different than she did the weekend of the explosion in 2012. She was wearing a jail jumpsuit, was shackled and her hair had grown long, dark and curly.‘I’M TELLING THE TRUTH’

Many people may remember Shirley giving an interview to the media, including WISH-TV, after the explosion. Defense attorneys tried to play that video for jurors Wednesday, but the judge wouldn’t allow it. The defense attorney told the judge – without the jury in the room – that he planned to use the video to show that Shirley had the same demeanor in the courtroom as she did while lying to reporters.

“I’m telling the truth and nothing but the truth” was a phrase repeated by Monserrate Shirley throughout the day.

Monserrate Shirley cried at various points Wednesday but didn’t shed any actual tears. Shirley said she has a condition with her tear ducts that makes her unable to produce tears, so “people don’t think I’m crying for real.”

The first time Shirley cried on the stand Wednesday was when she was asked about her neighbors. A prosecuting attorney showed her a photo of the house that exploded and asked her who lived on either side of her.

“(They were) my neighbors for a very long time … since we built the house,” Shirley said.

Later that same day, an attorney asked Shirley if the Longworths deserved what happened to them.

“No one deserved what happened. No one,” Shirley replied, crying.‘I WAS IN LOVE WITH HIM’

Monserrate Shirley testified that Mark Leonard is the one who told her to increase the insurance on the contents of her house, and she also testified Mark Leonard brought up the idea of setting fire to her house for “easy” money.

On multiple occasions Wednesday, Shirley said she didn’t say “no” to Mark Leonard because she loved him.

“I was scared. It was never no for an answer. I did everything to make him happy,” Monserrate Shirley said in testimony.

To begin the day, Monserrate Shirley explained how she and Mark Leonard met. She went to a bar on the south side of Indianapolis in November 2011 and they immediately noticed each other. Mark Leonard drove her home that night and stayed with her for what the defense characterized as a “romantic, sexual” night.

Mark Leonard moved in with Monserrate Shirley about a month later. Shirley said she was attracted to Mark Leonard, particularly noting he was well-dressed and had bleach blonde hair.

Attorneys walked Shirley through a number of conversations she had with Mark Leonard from the time they met until the house exploded.

At one point, after one of the failed attempts to burn the home, Monserrate Shirley said she offered Mark Leonard her 401k instead. He asked how much was in the 401k, according to Shirley.

After the second failed attempt to burn the home, Monserrate Shirley said she went to the home of Glenn Hults to pick up her daughter. She told him the attempt didn’t work but that there would be another attempt.

“Glenn told me, ‘Between Mark and Gary, they’re going to explode the whole neighborhood.’ I said, ‘Don’t play like that. Don’t make that kind of joke,'” Shirley testified.

Both the prosecution and defense attorneys asked Shirley if she thought Hults was joking.

“Yes, I didn’t think it would be possible,” Monserrate Shirley said.‘HUGE’ EXPLOSION

When testimony moved to the night of the explosion that killed Jennifer and Dion Longworth, Monserrate Shirley had a difficult time staying composed.

Shirley testified that friends called and told her there was a “huge” explosion.

“I thought it was crazy, that cannot be done, and I asked Mark, ‘That’s not what you told me, there’s an explosion in there, (there’s) people, my neighbors, that cannot be real,’” Shirley said.

At the time her friends called her, Monserrate was at a casino with Mark Leonard. She didn’t know anyone died, she said. She later found out her neighbors didn’t make it.

Shirley recalled a later conversation that she had with Bob and Mark Leonard, after the explosion.

“I told them I don’t even want to be a part of this,” Shirley testified as telling the Leonards.

Shirley said she recalled telling them “two innocent people die out of this.”‘THIS HAS TO BE DONE’

Monserrate Shirley detailed the multiple attempts made to set the house on fire prior to the explosion that leveled the home.

The first attempt was supposed to be carried out by Gary Thompson, but it failed.

“Mark Leonard said, ‘We’re going to do it again. This has to be done,'” Shirley testified. “I said, ‘You guys are crazy,’ that my house is too big.”

The next time, Monserrate Shirley said Mark Leonard’s brother, Bob, was supposed to carry out the plan. But after a second round of boarding Snowball the cat, getting a babysitter for Shirley’s daughter and setting hotel reservations, the house again was standing.

The third weekend’s attempt was the one that killed the Longworths.

If Monserrate Shirley keeps up her part of the agreement, a judge will decide her sentence after all the Richmond Hill explosion trials have been completed. She could face 20-50 years in prison. Deputy Prosecutor Denise Robinson has said she will argue for 50 when the time comes.