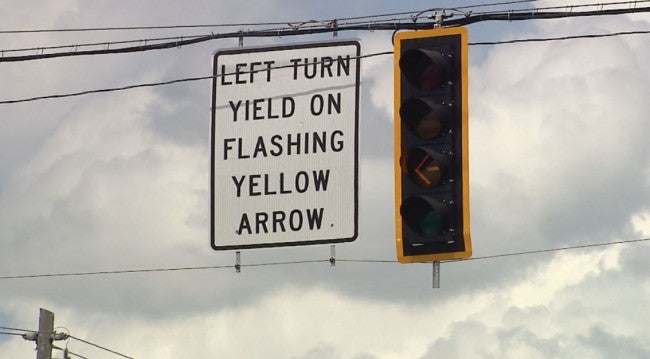 INDOT will install flashing yellow lights at five east side intersections starting Wednesday. Officials say the arrows help with traffic flow and are safer and more efficient than standard lights.

Instead of a solid green light in the left turn lane, drivers will see a flashing yellow light. That means drivers should yield to oncoming traffic before turning left. INDOT said the flashing yellow will be more intuitive and give drivers more time to turn.

When the arrow stops flashing, drivers should start to stop because it is about to turn red. In recent weeks INDOT has put the lights up in Hamilton County and on the south side of Indianapolis. INDOT said it is part of a statewide roll-out.

INDOT has been investigating the crash, and staff members have been watching traffic at the intersection. A spokesperson said technicians are adjusting the hours when the flashing yellow arrows are used, to less busy times of day.