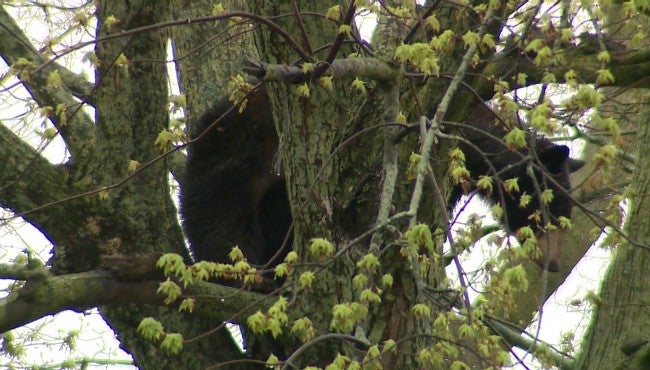 The bear spent hours dangling about 22 feet up in a tree on Dayton Street between Straight and Deloney avenues on the city’s West Side.

A Michigan Department of Natural Resources biologist tranquilized the bear shortly before 12:30 p.m.  A Grand Rapids Fire Department truck then arrived at the scene with a ladder so crews could reach the sleeping 125-pound bear to push it out of the tree, with the help of a rope.

“It kind of fell, but it landed in real wet dirt, so the bear should be fine,” said John Niewoonder with the DNR.

Kent County Health Department spokesman Steve Kelso said the capture was delayed until about noon so the DNR could get an additional tranquilizer gun. Kent County Animal Control officers were also on the scene with tranquilizer guns, if needed.

Grand Rapids police also responded to the scene, but said they would not shoot the animal unless it was a direct threat to a person.

Niewoonder said the DNR has had very few “troublesome” interactions with black bears.

“They’re not really much of a risk. Bears, black bears, they don’t want to mess with people. They very rarely attack people unless they’re cornered, or unless people are doing dumb things like feeding them,” he said.

Niewoonder said a bear was reported west of Grand Rapids a couple days ago, but he’s not sure if this is the same bear.

“We have had bears in here that kind of run through and we kind of chase them. I personally have not dealt with one in Grand Rapids. We’ve had them in Greenville and different areas, but this is by far the most urban area that we’ve had,” he said.

Wandering bears are more common around spring, according to the DNR.

“He was lost. He’s a young bear. When they come out of the den (during) their second spring, they have to leave their mother, the mother will drive them off and then they start looking for a home. If they can’t find a home where another bear isn’t, then they keep moving, and keep moving and keep moving. And this bear unfortunately decided to come into the city, and probably got confused, but kept going. (It) didn’t know where to go, ended up here, encountered a bunch of people, went up a tree and felt safe there,” said Niewoonder.

The biologist said the tranquilizer should wear off within two hours after it was administered. Crews loaded the bear into a live trap so it could be transported several counties north, where it would be released.

A crew from the John Ball Zoo also assisted the effort.