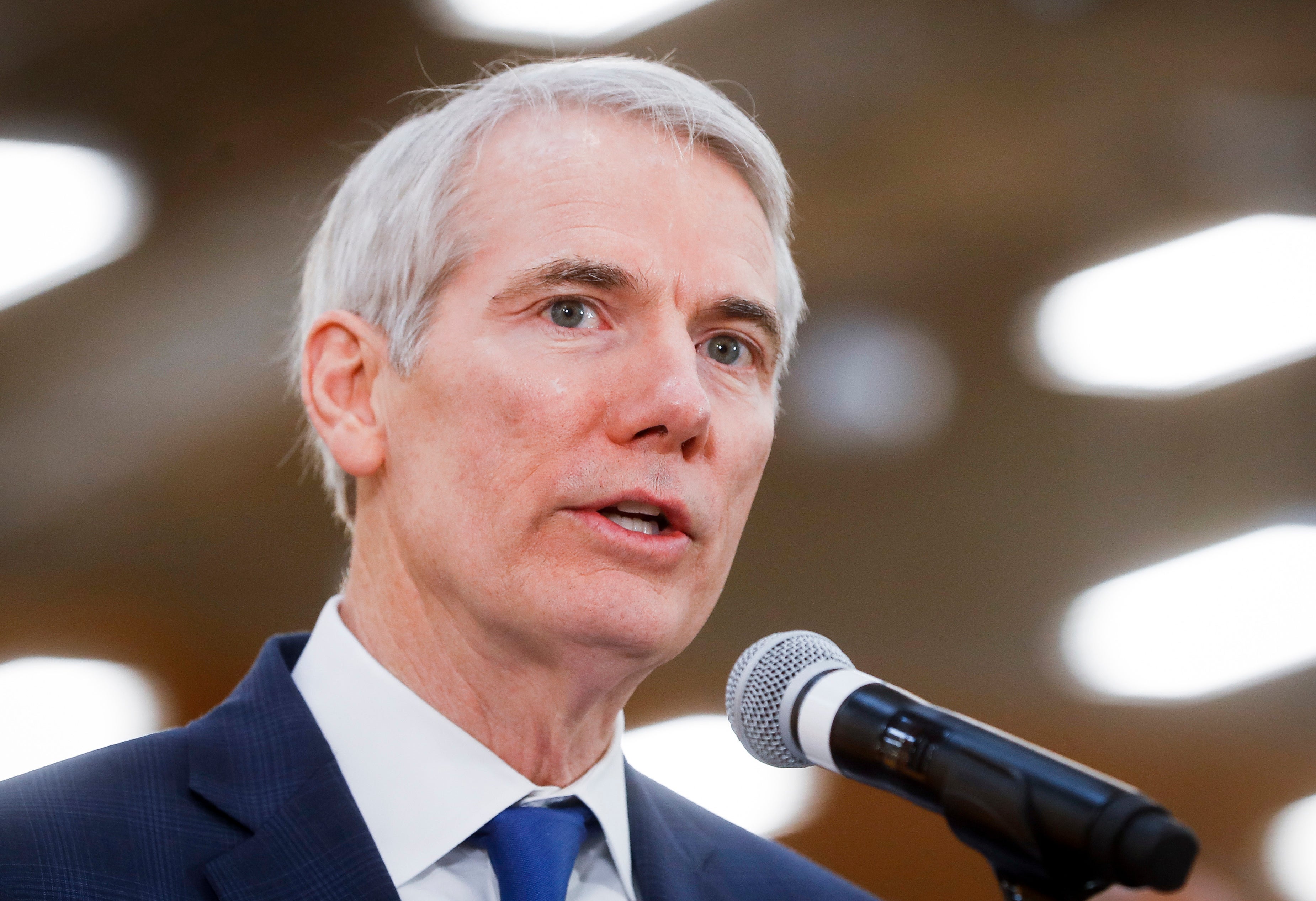 FILE - In this April 16, 2018, file photo, Sen. Rob Portman, R-Ohio, speaks during a news conference in Cincinnati. The Obama administration secretly sought to give Iran brief access to the U.S. financial system by sidestepping sanctions kept in place after the 2015 nuclear deal, despite repeatedly telling Congress and the public it had no plans to do so. That’s according to an investigation by Senate Republicans released June 6. “The Obama Administration misled the American people and Congress because they were desperate to get a deal with Iran,” said Portman, the subcommittee’s chairman. (AP Photo/John Minchillo, file)
by: Clare Foran, Jeff Zeleny and Alex Rogers, CNN
Posted: Jan 25, 2021 / 10:52 AM EST / Updated: Jan 25, 2021 / 05:29 PM EST

(CNN) — Republican Sen. Rob Portman of Ohio announced Monday that he will not run for reelection after his current term in office ends in 2022, saying in a statement that the entrenched partisan gridlock in Washington was a factor in his decision.

The announcement will set off what could become a highly competitive race to fill the seat and will reshape the 2022 battlefield for control of the Senate. The news could also potentially pave the way for a crowded GOP primary field in a state won by former President Donald Trump in both the 2020 and 2016 presidential elections.

There is already speculation that Ohio Republican Rep. Jim Jordan, a close ally and vocal defender of Trump, could run. Other possible GOP candidates include: J.D. Vance, the author of Hillbilly “Elegy,” Josh Mandel, who dropped out of the 2018 GOP primary race to challenge Democratic Sen. Sherrod Brown, and Jon Husted, the state’s lieutenant governor.

A GOP source who has worked with the Portman team texted CNN: “There are two scenarios for the seat now: 1.) Jordan Runs and Clears the Field; 2.) Everyone in the State Runs.”

LaRose, who served as a Green Beret in Iraq as a member of the Special Forces, is a former Republican state senator. He largely financed his own bid as secretary of state, and his family is well established and funded, as he is the son of a beer distribution family company.

On the Democratic side, one possible candidate could be Rep. Tim Ryan, who unsuccessfully ran for president in the 2020 Democratic primary. A top Democratic operative in the state told CNN they hope Ryan finally pulls the statewide trigger and runs. He had been thinking about governor, the source said, “but Senate clearly fits him better.”

Ryan tweeted Monday afternoon that while he has not made a decision yet, he is seriously considering a bid.

“I’m overwhelmed by supporters who are reaching out to encourage me to run for Senate. I haven’t made a decision yet but I’m looking seriously at it. Ohio deserves leaders who fight for working people,” he said.

In his statement, Portman said that partisan stalemate has grown worse and that played a role in his decision, saying, “I don’t think any Senate office has been more successful in getting things done, but honestly, it has gotten harder and harder to break through the partisan gridlock and make progress on substantive policy, and that has contributed to my decision.”

“We live in an increasingly polarized country where members of both parties are being pushed further to the right and further to the left, and that means too few people who are actively looking to find common ground. This is not a new phenomenon, of course, but a problem that has gotten worse over the past few decades,” he said, adding, “This is a tough time to be in public service.”

In announcing his decision, Portman also signaled he stands ready to work with the Biden administration as it attempts to win bipartisan support for the President’s economic rescue package responding to the pandemic.

“For many of the issues I am most passionate about, I will continue to make a difference outside of the Senate, beyond 2022. In the meantime, I am hopeful that President Biden will follow through on his inaugural pledge to reach across the aisle, and I am prepared to work with him and his administration if he does,” he said. “I was on the bipartisan call yesterday on a new COVID-19 package. I hope the Administration will work with us on a more targeted approach that focuses on things like vaccine distribution, testing and getting kids back to school.”

Senate Minority Leader Mitch McConnell reacted to the news on Monday by saying in a statement that “My friend Sen. Portman’s announced retirement in two years will be a big loss for the entire Senate.”

“Both the Republican conference and the institution as a whole will be worse off when Rob departs. Fortunately, in the meantime, we have two more years to continue drawing on his knowledge, his principles, and his dedication as we keep fighting for American families,” McConnell said.

“Very, very sad to see that @senrobportman is not seeking reelection. Rob is one of the smartest, most sincere members of the Senate that I have ever known. This will be a major blow to the Senate as well as the Republican Party,” Graham tweeted.

This headline and story have been updated to include additional developments Monday.