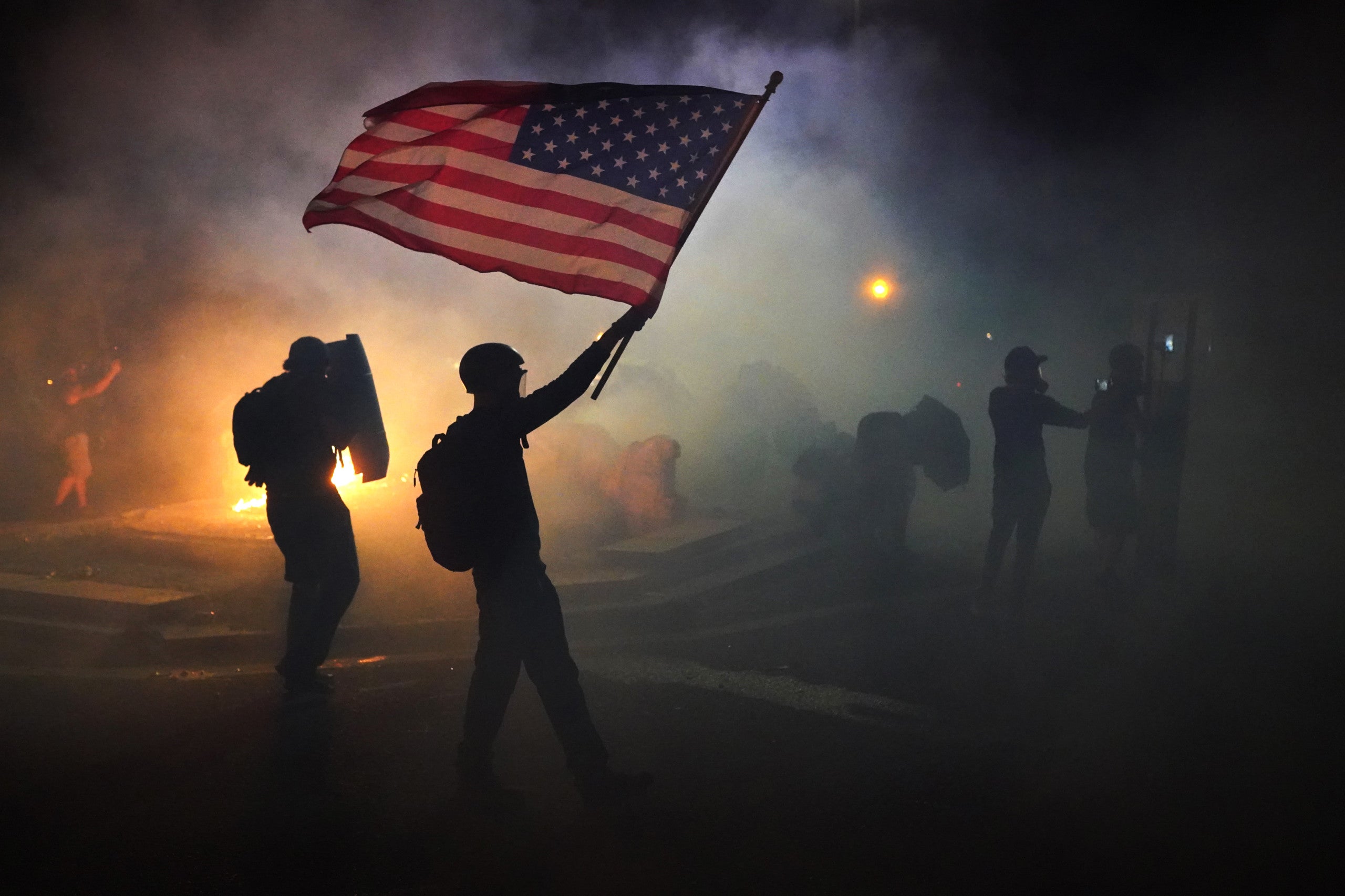 PORTLAND, OR - JULY 21: A protester flies an American flag while walking through tear gas fired by federal officers during a protest in front of the Mark O. Hatfield U.S. Courthouse on July 21, 2020 in Portland, Ore. The federal police response to the ongoing protests against racial inequality has been criticized by city and state elected officials. (Photo by Nathan Howard/Getty Images)
by: Josh Campbell, CNN
Posted: Jul 21, 2020 / 09:22 AM EST / Updated: Jul 21, 2020 / 09:22 AM EST

(CNN) — It’s classic entrenchment with no end in sight.

Neither side is backing down as protesters and federal agents continue to periodically clash in downtown Portland following an infusion of federal resources in the area, and the Trump administration persists in seeking political gain from ongoing tensions.

“We want them to get the f*** out of our city,” said Aaron, a Portland resident who withheld his full name as he stood outside a courthouse, protesting the increased presence of federal forces.

“I offered DHS support to help locally address the situation that’s going on in Portland, and their only response was: please pack up and go home,” said acting Homeland Security Secretary Chad Wolf in an interview with Fox News, adding, “That’s just not going to happen on my watch.”

What constitutes the situation Wolf describes is not one mutually accepted by those on different sides of the issue. The Trump administration says they are fighting “anarchists.” But protesters here on the ground in Portland tell CNN the President and his team are broad brushing an entire movement — overwhelmingly peaceful, despite some periods of violence — for purely political reasons.

For more than 50 days since the death of George Floyd at the hands of Minneapolis police officers, demonstrators have gathered in Portland seeking accountability for law enforcement officers they believe have acted with impunity.

Ahead of the July Fourth weekend, the Trump administration dispatched teams of federal agents to the city as part of an effort to guard federal monuments. The President says federal resources were sent to protect federal property from destruction, but protesters say it is the large increase in federal forces that continues to fuel their anger.

While protests during the daylight hours have been overwhelmingly peaceful — marked by marches, unity gatherings, and even the singing of songs — clashes at night between some protesters and federal officers have resulted in the repeated vandalism of the US courthouse in downtown Portland and the tear gassing of demonstrators.

In one incident earlier this month at the courthouse, police say a man was arrested after assaulting a federal agent with a hammer.

Heavily armed tactical agents holed up inside the federal facility will periodically appear on the street at night without warning and respond to escalations by some protesters, such as the launching of fireworks at the building or the removal of metal fencing erected to keep protesters away.

When federal agents do exit the building, they do so in a massive show of force. Tear gas and crowd dispersant projectiles litter the air as demonstrators and journalists scramble to safety.

While the efforts by federal officers to clear the area are momentarily successful, it remains part of an endless cycle: the protesters eventually return to the courthouse once the acrid smell of chemical gas partially dissipates.

Certain encounters between demonstrators and law enforcement have generated widespread controversy and allegations of excessive use of force by federal agents. Earlier this month, a protester was seriously injured after the man was shot in the head with impact munitions used for riot control.

On Saturday night, 53-year-old Navy veteran Chris Davis was beaten by a federal agent with a baton outside the court house and sprayed with pepper spray at close range.

“I was going to ask why they weren’t living up to their oath of office, the Constitution,” said Chris Davis. “All I wanted to do was ask them why.”

CNN has reached out to the Department of Homeland Security and US Marshals for comment on the incident.

In another viral video that sparked national outrage from activists and government officials, two federal officers in camouflage tactical uniforms approached and detained a man, placed him inside an unmarked van and drove away.

After refusing for hours to respond to CNN’s requests for comment on the incident, US Customs and Border Protection eventually released a statement identifying the officers as belonging to that agency, and indicated the man was wanted for questioning regarding a possible crime. However, a DHS official said he was later released.

This incident was too much for Democratic Sen. Jeff Merkley of Oregon, who described the actions by CBP agents in Orwellian terms.

“Authoritarian governments, not democratic republics, send unmarked authorities after protesters,” he tweeted. “These Trump/Barr tactics designed to eliminate any accountability are absolutely unacceptable in America, and must end.”

In part due to the viral video, the top prosecutor in Oregon is calling on watchdog agencies at the Department of Homeland Security and Justice Department to investigate the actions of federal officers in Portland. Three powerful Democratic committee chairs in the House of Representatives are now calling for the same.

As some senior government officials call for investigations into federal action, the brinksmanship on the ground in Portland remains ongoing. Protesters calling for an end to racial injustice square off with agents championed by a President who continues to use unrest in the city as political ammunition in his attempts to portray himself as tough on crime.

Although the President and senior DHS officials have portrayed Portland as a city under siege, the picture on the ground is markedly different from the image of bedlam they are attempting to project.

Rather than widespread chaos, the epicenter of daytime and nightly protests has largely been relegated to the city block housing the federal courthouse.

Some local journalists who have covered the protests here since the beginning have also observed an apparent broad brushing by law enforcement, who they say tend to lump all demonstrators — including the overwhelming majority of peaceful protesters — into one group of suspected criminals.

“The way that law enforcement and even public officials here have been talking about these protests is really in a sweeping, all-encompassing way, saying this whole crowd of people are committing a riot or committing a crime as opposed to a number of them,” said reporter Alex Zielinski of Portland Mercury in an interview with CNN. “So I think that’s the way federal police are operating. They see anyone involved in these protests as someone who is committing a crime.”

The protesters are not alone in their antipathy towards the federal government. Local elected officials in Portland have repeatedly called for the disbanding of Trump’s federal cavalry so they can address the protests themselves.

“What they are doing is sharply escalating the situation,” said Portland mayor Ted Wheeler in an interview Sunday with CNN’s Jake Tapper. “Their presence is actually leading to more violence and more vandalism and it’s not helping the situation at all. They’re not wanted here.”

Despite reality checks from those who have seen the Portland situation up close, Trump continues to use the city’s ongoing protest movement for political gain.

And Portland is not the only city facing the President’s scrutiny.

On Monday, Trump said he will also send federal law enforcement to other cities, “all run by very liberal Democrats,” in the latest example of his “law and order” messaging. However, despite the President’s attempts to portray these cities as being in states of chaos, there is no indication any of them have experienced the degree of calamity Trump is describing to the American people.

It is unclear how the escalated tensions in Portland will be resolved. With Trump and DHS ratcheting up their heated rhetoric to label protesters, and demonstrators angered and steeled by the caustic descriptions of their movement, no clear path to resolution exists as demonstrators and rioters continue to gather outside the federal courthouse.

“It’s ironic that we’re getting tear gassed for protesting against aggressive police tactics,” said Eric, a protester from Washington State who refused to give his surname for fear of being targeted by authorities.

“We’re not leaving,” he said. “I think it says more about them than us when the feds respond to our demands for justice with tear gas and smoke bombs.”