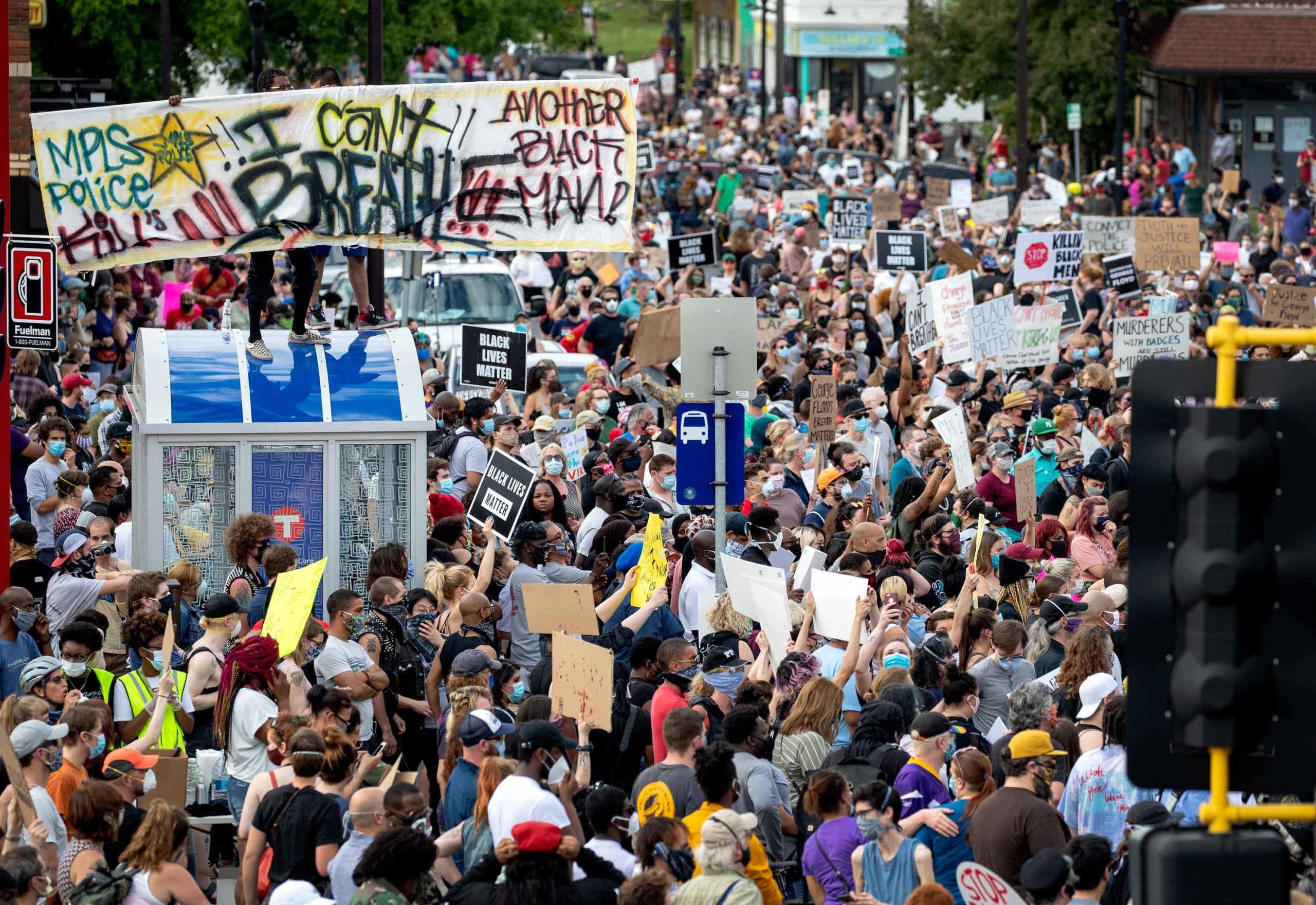 Protesters gather calling for justice for George Floyd on Tuesday, May 26, 2020, in Minneapolis. Four Minneapolis officers involved in the arrest of Floyd, a black man who died in police custody, were fired Tuesday, hours after a bystander's video showed an officer kneeling on the handcuffed man’s neck, even after he pleaded that he could not breathe and stopped moving. (Carlos Gonzalez/Star Tribune via AP)
by: Christina Maxouris and Jason Hanna, CNN
Posted: May 28, 2020 / 04:23 PM EST / Updated: May 28, 2020 / 06:23 PM EST

(CNN) — Minneapolis’ police chief acknowledged Thursday his department had contributed to a “deficit of hope” in the city after the death of George Floyd — and he and other officials called for calm following a night of destructive protests.

“I am absolutely sorry for the pain, devastation and trauma Mr. Floyd’s death has left on his family, his loved ones,” Minneapolis and the world, Minneapolis Police Chief Medaria Arradondo said in a news conference.

“I know there is currently a deficit of hope in our city … and I know our department has contributed to that deficit as a whole,” Arradondo said.

But he also said he cannot allow the kind of looting, fires and business damage that stemmed from street protests Wednesday night.

And the city’s mayor said he’s requesting state assistance and allowing Arradondo to use resources from other jurisdictions.

“We must confront our shortcomings with humility as well as hope. We must restore the peace so that we can do this hard work together,” Mayor Jacob Frey said.

Fury has been rising in Minneapolis over Monday’s death of Floyd, a black man who died after pleading for help as a police officer pinned him — unarmed and handcuffed — to the ground.

On Wednesday night, Minneapolis’ second day of protests transitioned to rioting and looting south of downtown, with people smashing their way into stores and setting businesses and other buildings ablaze.

One of Floyd’s brothers cried Thursday morning as he said his family wants protests to be peaceful, but stressed people are struggling with seeing another black man die following a police encounter, this one over the passing of an allegedly counterfeit $20 bill at a store.

“I want everybody to be peaceful right now, but people are torn and hurt, because they’re tired of seeing black men die,” George Floyd’s brother, Philonise Floyd, said on CNN’s “New Day.”

“These officers (involved in George’s arrest) need to be arrested right now … and held accountable about everything because these people want justice right now,” he said.

A man was fatally shot overnight near the protests, police said early Thursday. One person was arrested, and police said they’re investigating the nature of the incident.

As the protests developed, demonstrators threw water bottles and firecrackers at officers and a police precinct building.

Fires eventually broke out at businesses in the area, including an AutoZone. Flames lit up a building under construction, one floor eventually collapsing.

At a nearby Target, video shows people taking cartloads of goods and loading them into their cars.

People also raided a grocery store. On Thursday morning its exterior glass lay shattered and the floor was littered with groceries as a interior fire sprinkler system sprayed water.

An unspecified number of police officers and other people suffered minor injuries in the protests, Arradondo said, without elaborating.

Demonstrations were held elsewhere in the country Wednesday night. In Los Angeles, hundreds of protesters marched. At one point, some attacked a California Highway Patrol car.

In Memphis, Tennessee, police in riot gear responded to a protest and at least two people were arrested, CNN affiliate WHBQ reported.

The unrest followed shock and anger that spread through communities across the country as bystander video of Floyd’s last moments alive began circulating on social media.

The 46-year-old man was arrested Monday evening after, police said, officers were called to investigate alleged forgery at a corner store called Cup Foods. Mahmoud Abumayyaleh, an owner of the store, told CNN a staff member called police to report someone using a fake $20 bill.

Police arrived, and Floyd, a suspect in the incident, was handcuffed and pinned on the ground. As he pleaded that he couldn’t breathe, a police officer held him down with a knee on his neck. Three other officers also were at the scene.

The Minneapolis Police Department this week fired the four officers involved in Floyd’s arrest. The cause of Floyd’s death hasn’t been released, and the incident is being investigated by local, state and federal authorities.

Floyd, a 46-year-old Houston native, worked security at Conga Latin Bistro in Minneapolis for five years, according to its owner, Jovanni Thunstrom.

He moved to Minneapolis for work and to drive trucks, his friend of more than 20 years, former NBA player Stephen Jackson, said.

Jackson said Floyd, a father of two girls, was like a brother to him, and they used to refer to each other as twins.

“He was just a great dude … somebody that wanted to be a protector and provider for everybody around him,” Jackson told CNN Thursday.

“It sucks that the whole world had to see my friend go that way. … He didn’t deserve that, but the way that people are supportive of him and standing up for him … his death will not be in vain.”

No charges have been filed in Floyd’s death, but his family say they want murder charges for all four fired officers.

Who the officers are

In a news conference Wednesday, Mayor Frey also called for criminal charges to be brought against the officer who kept his knee on Floyd. That officer was identified by his attorney Tom Kelly as Derek Chauvin. Kelly has not released a statement on Chauvin’s behalf.

Chauvin had 18 complaints filed with the police department’s internal affairs division, according to MPD.

It’s unclear what the complaints, which were all closed, were for and no details were provided by police.

Only two of the 18 complaints against Chauvin were “closed with discipline,” according to a public summary from police. The “discipline issued” column listed a letter of reprimand for each of the two complaints.

“I am not a prosecutor, but let me be clear: The arresting officer killed someone,” Frew told CBS. “He (Floyd) would be alive today if he were white.”

The other three officers were identified by police as Thomas Lane, Tou Thao and J Alexander Kueng.

Thomas Plunkett, representing Kueng, said, “At this time, out of respect for Mr. Floyd, we are declining all invitations to discuss these painful events.”

Earl Gray is representing another of the officers involved but has declined to say who his client is.

Police said they arrested Floyd Monday after responding to the forgery call and finding him inside a car.

Police said he “physically resisted” after he got out of the vehicle.

Surveillance video obtained from a nearby restaurant shows some of the officers’ initial contact with him and doesn’t appear to show obvious resistance from a handcuffed Floyd. Eventually Floyd is escorted away from view.

Donald Williams, a witness, told CNN he was about to walk into a store when he noticed commotion. He said he saw Floyd “panting for his life, begging for his forgiveness.”

Williams’ description of events matches a video captured by one bystander in which Floyd can be heard calling for help, saying, “I can’t breathe,” and that his body was hurting.

Williams said he tried to approach an officer and ask what was happening. Officers said Floyd was “resisting arrest.”

“I said, ‘Officer, he’s not resisting arrest, you have your knee on him and you have handcuffs on him, he’s detained at this moment,'” he said. One officer responded by saying “this is what drugs do to you,” according to Williams.

Floyd was declared dead at a nearby hospital a short time later. A medics team that responded to the incident worked on an “unresponsive, pulseless male,” according to a Minneapolis Fire Department narrative released by police.

Minneapolis police have not yet released bodycam footage from the officers involved.