White House projects 100K to 240K US deaths from virus 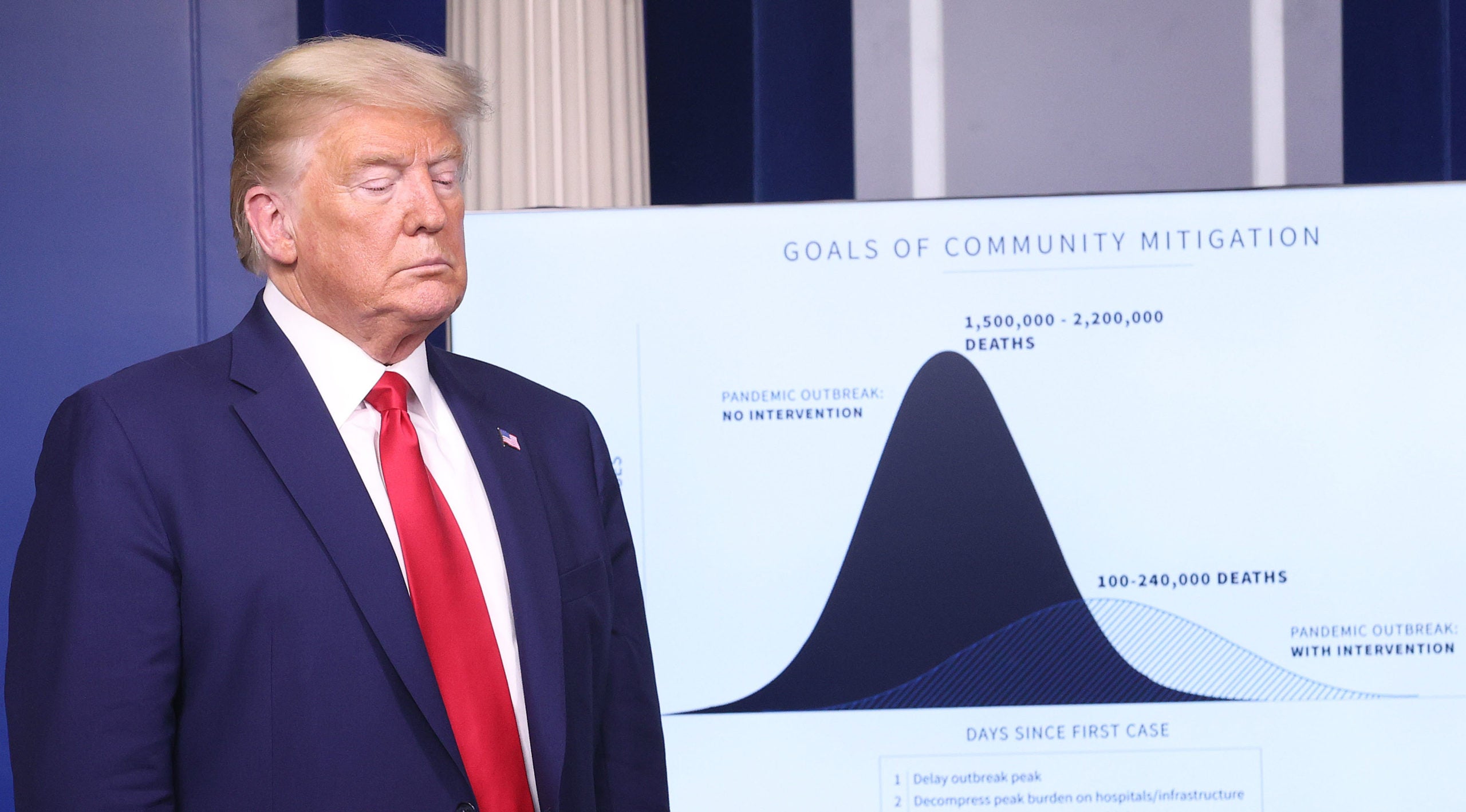 WASHINGTON (AP) — President Donald Trump on Tuesday warned Americans to brace for a “hell of a bad two weeks” ahead as the White House projected there could be 100,000 to 240,000 deaths in the U.S. from the coronavirus pandemic even if current social distancing guidelines are maintained.

Public health officials stressed that the number could be less if people across the country bear down on keeping their distance from one another.

“We really believe we can do a lot better than that,” said Dr. Deborah Birx, the coordinator of the White House coronavirus task force. That would require all Americans to take seriously their role in preventing the spread of disease, she said.

Added Dr. Anthony Fauci, the government’s top infectious disease expert, “This is a number that we need to anticipate, but we don’t necessarily have to accept it as being inevitable.”

Trump called it “a matter of life and death” for Americans to heed his administration’s guidelines and predicted the country would soon see a “light at the end of the tunnel” in a pandemic that has killed more than 3,500 Americans and infected 170,000 more.

“I want every American to be prepared for the hard days that lie ahead,” Trump said.

“This is going to be one of the roughest two or three weeks we’ve ever had in our country,” Trump added. “We’re going to lose thousands of people.”

The jaw-dropping projections were laid out during a grim, two-hour White House briefing. Officials described a death toll that in a best-case scenario would likely be greater than the more than 53,000 American lives lost during World War I. And the model’s high end neared the realm of possibility that Americans lost to the virus could approach the 291,000 Americans killed on the battlefield during World II.

Fauci called the numbers “sobering” and urged Americans to “step on the accelerator” with their collective mitigation efforts.

“We are continuing to see things go up,” Fauci said. “We cannot be discouraged by that because the mitigation is actually working and will work.”

Birx said pandemic forecasts initially predicted 1.5 million to 2.2 million deaths in the U.S. But that was a worst-case scenario, without efforts to slow the spread of the coronavirus through social distancing. She added that states that have not yet seen a spike in cases as New York has could take action to flatten the curve of rising hospitalizations and deaths.

It’s not only social distancing that could make a difference, but also the frantic efforts by hospitals around the country to prepare for an onslaught of seriously ill patients. The better prepared hospitals are, the greater the chances of lives being saved.

There’s also a wild card when it comes to treatment: whether the experimental drug combination Trump has touted — a medicine for malaria and an antibiotic — will actually make a difference. That combination is already being used on thousands of patients, and Fauci said he would want to see a rigorous test of its effectiveness.

Trump’s comments came after he announced Sunday that he was extending to April 30 the social distancing guidelines that advise Americans to cease large gatherings, work from home, suspend onsite learning at schools and more in a nationwide effort to stem the spread of the virus.

It was an abrupt reversal for Trump, who spent much of last week targeting April 12 as the day he wanted to see Americans “pack the pews” for Easter Sunday services.

Trump called the data “very sobering,” saying it was his understanding that 100,000 deaths was a minimum that would be difficult to avoid. He also sought to rewrite his past minimization of the outbreak, saying he rejected those who compared the new coronavirus to the flu — when in fact he repeatedly did so publicly.

“This could be hell of a bad two weeks,’” Trump said. He added: “You know 100,000 is, according to modeling, a very low number. In fact, when I first saw the number … they said it was unlikely you’ll be able to attain that. We have to see but I think we’re doing better than that.”

Trump played down concerns from New York’s Andrew Cuomo and other governors that their states’ hospitals don’t have enough ventilators to treat an anticipated crush of patients. Trump said the federal government currently has a stockpile of 10,000 ventilators that it plans on distributing as needed.

“Now, when the surge occurs, if it occurs fairly evenly, we’ll be able to distribute them very quickly before they need them,” Trump said. “But we want to have a reserve right now. It’s like having oil reserves.”

Birx said the experiences of Washington state and California give her hope that other states can keep the coronavirus under control through social distancing. That’s because they moved quickly to contain the early clusters of coronavirus by closing schools, urging people to work from home, banning large gatherings and taking other measures now familiar to most Americans, she noted.

“I am reassured by looking at the Seattle line,” she added. “California and Washington state reacted very early to this.” Many other states and local governments already have stiff controls in place on mobility and gatherings.

Trump said he would also ask Florida Gov. Ron DeSantis to allow the docking of two cruise ships with passengers who have had contact with patients suffering from COVID-19. Passengers are anxious to disembark once they reach Florida, but DeSantis said the state’s health care resources are already stretched too thin to take on a ship’s coronavirus caseload.

“They’re dying on the ship,” Trump said. “I’m going to do what’s right, not only for us for but humanity.”

Trump also said he planned to curtail his travel for the month ahead and stay close to the White House to safeguard his health. The president hasn’t held one of his signature big-stadium rallies since early March, and it’s unlikely he’ll be holding another one anytime soon.

“I think it’s important that I remain healthy. I really do,” Trump said. “So for the most part we’re staying here.”

Trump spoke after another troubling day for the stock market, which has been in a free fall as the cononavirus ground the economy to a near-halt and left millions unemployed. The Dow Jones Industrial Average plunged more than 400 points, or roughly 1.9%, to seal the worst first-quarter finish of its 135-year history.