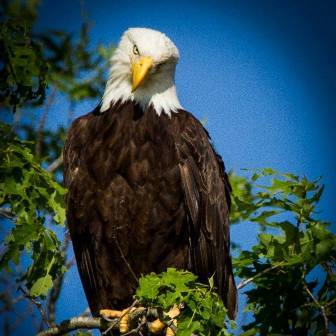 BLOOMINGTON, Ind. (WISH) — Boaters on Lake Monroe spotted a bald eagle Sunday that experts are calling very rare due to its old age.

DNR Division of Fish & Wildlife biologist Teresa Bass was on the lake with her husband when the pair saw a bald eagle along the shoreline.

Teresa was carrying a camera with a telephoto lens and managed to snap several photos from a distance.

Based on an orange band on one wing and metal leg bands, DNR officials identified the bird as C43, one of the eagles released in the lake area in the late 1980s.

“I was kind of shocked,” said John Castrale, who supervised the DNR’s release of bald eagles, peregrine falcons and ospreys before retiring last year.

According to DNR records, C43 was taken from a nest in Whitestone Harbor in southeastern Alaska on July 22, 1988, as part of Indiana’s bald eagle restoration program.

Only six bald eagles have been documented to live that long, with the oldest being 33.

C43 has been spotted in Kentucky, Ohio and Tennessee, though she is most frequently seen on Lake Monroe.