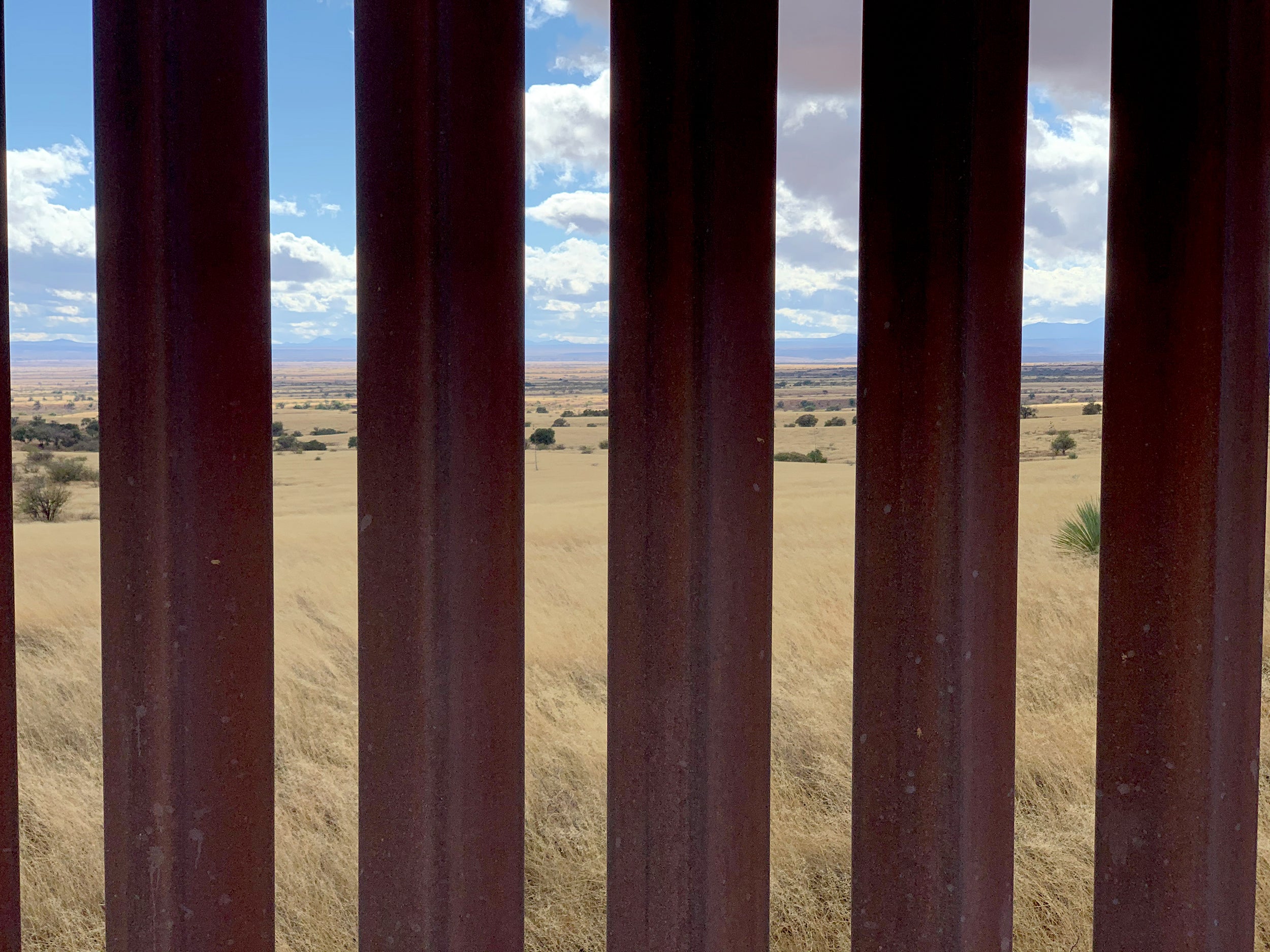 (CNN) — At a secluded spot in southeast Arizona, the San Pedro River flows north from Mexico and crosses the United States border, running under a majestic canopy of tall cottonwood trees.

The river’s winding path is a migration gateway and critical habitation for hundreds of animal species. The National Audubon Society for Arizona says 40% of bird species in North America spend part of their lives on the San Pedro River at some point.

But the US Border Patrol sees the river as a natural gateway of drug smuggling and illegal immigration into the United States.

In the waning days of the Trump administration, construction crews are rapidly building a 30-foot high steel bollard-style wall across the riverbed. Usually, the only sound you hear is the wind whipping through the golden leaves overhead. As you hike toward the spot these days, the clattering sound of construction crews takes over.

Environmentalists say the work disrupts the migration patterns that rely on the river.

The work is part of a final sprint to complete as many miles of border wall as possible before President-elect Joe Biden takes office on January 20.

As of December 18, construction crews had completed 438 miles of border wall since January 2017, according to Customs and Border Protection. Last year, the Trump administration vowed to complete 450 miles by the end of 2020, just over a week from now. There are 37 border wall construction projects in motion along various points of the border with Mexico, according to the US Army Corps of Engineers.

In all, the Trump administration has secured funding to build up to 738 miles of new and replacement wall. The question becomes what will happen to the roughly 300 miles of border wall that remains to be built.

This summer, Biden said that under his watch “there will not be another foot of wall constructed in my administration.”

“You have to secure the border to get the trust and favor of the American public,” said Judd. “I’m truly hoping that the Biden administration is going to look at this and look at how effective this has been and reevaluate their position on the wall.”

Judd also argues that environmental concerns over the border wall are “overblown” and that construction has not caused environmental damage.

A threat to migrating wildlife

Environmentalists and other activists could not disagree more.

Kate Scott, the Executive Director and president of the Madrean Archipelago Wildlife Center, sees the wall construction as a disruptive threat to wildlife that rely on migrating through this desert region.

“I feel great pain in my heart,” said Scott. “It’s like driving a stake through my heart because the river should be allowed to be, and not have this monstrosity. This wall of shame.”

Scott watched as construction crews welded chunks of the steel border wall that now stretches across the width of the San Pedro River. The wall will be equipped with massive gates that can swing open during the region’s summer monsoon season. There are only a few inches of separation between each steel bollard.

When the heavy rains come, the river can turn into a raging rapid, swiftly moving fallen trees and natural debris. The gates are supposed to let the river water flow without damaging the wall construction.

Customs and Border Protection Public Affairs Specialist John Mennell said the agency is working to find spots along the border wall where “small wildlife passages” can be created “that will support wildlife migration, without compromising border security.”

When it takes office, the Biden administration will face calls from activists to not only halt construction of the wall, but to tear it down, especially in environmentally sensitive areas.

Anti-wall activists such as John Kurc have spent months documenting what they describe as an environmental catastrophe at the construction sites. Kurc travels the southern border capturing video images of the explosive detonations used by crews to carve their way through the rugged terrain.

“This is sickening and a waste of money,” wrote Kurc on a Twitter post earlier this month showing drone footage of what he described as blast damage in Arizona’s Guadalupe Canyon, another location designated by the administration for the wall.

The Wildlands Network, a conservation non-profit, put up trail cameras when construction began in the San Bernardino Valley in late 2019 to monitor changes to animal migration in the area, which is also home to the San Bernardino National Wildlife Refuge. As of last week, “all connectivity and movement between the United States and Mexico in southeastern Arizona has been stopped dead in its tracks,” Myles Traphagen, who coordinates Wildlands Network’s borderlands program, wrote in a blog post. The detection of most species has declined, he wrote, and mountain lions who normally roam across the border are now pacing back and forth along the wall.

But from a high point looking toward that blast site of the Canyon, Border Patrol agent Daniel Hernandez defended construction of these massive projects in some of the most remote areas of the southern border.

The wall is “not the end all, be all,” Hernandez said, but it’s one piece of a wider border protection system that also includes boots on the ground as well as detection and surveillance technology. The wall, he said, slows down smugglers and migrants and gives agents more time to respond.

“We know it’s going to be effective,” Hernandez said. “A bigger piece of infrastructure here in southern Arizona is vital for us. We’ve seen other projects similar to this have curtailed and slowed some of the traffic for us.”

‘This thing is a disaster’

But activists argue the construction is fundamentally damaging the landscape and culture of entire border regions, such as Organ Pipe Cactus National Monument in Arizona, about 275 miles west of Guadalupe Canyon.

This is where Laiken Jordahl of the Center for Biological Diversity and others have been sounding the alarm on the construction through this national park in the heart of the Sonoran Desert.

The work is replacing steel vehicle barriers on the international boundary. Environmentalists warn that the construction will severely restrict the ability of animals to move freely and reach the Quitobaquito Springs, which Jordahl says, is the most plentiful source of water for 50 miles in any direction.

“This thing is a disaster,” Jordahl told CNN. “This wall is not going to do anything to secure the border, but it will destroy this incredible national park. It will kill wildlife in this area.”

Border Patrol officials say drug smugglers have exploited the existing “Normandy” barriers that were first put in place to keep drug smugglers and undocumented immigrants from driving across the international line. The barriers are made of criss-crossed heavy steel bars that can range 4-6 feet off the ground.

Earlier this year, construction crews detonated explosives through a section of the National Park known as Monument Hill, revered by the Tohono O’odham Nation.

The Native American tribe says it’s an ancestral burial ground and the final resting place for many of its ancestors.

“For us this is no different from DHS building a 30-foot wall along Arlington Cemetery or through the grounds of the National Cathedral,” Ned Norris Jr., Chairman of the Tohono O’odham Nation told a Congressional subcommittee earlier this year.

Border Patrol officials say external environmental and archaeological monitors are on site overseeing the construction. Roy Villareal, the former Chief Border Patrol Agent in the Tucson Sector, wrote on Twitter in February that workers “have not found any burial sites or remains in the limited detonation zone.”

CBP says it’s “committed to the protection of the nation’s cultural and natural resources.” The agency says throughout the process it has routinely met with residents

Transformation of the border

People with property along the border have witnessed transformational changes over the past decades.

Jim Chilton straddles a long, barbed wire fence that divides his ranch from Mexico. He wants to drive home the point that this fence isn’t enough.

Chilton said he even offered the federal government 10 acres of his land as a forward operating base. “I offered it for a dollar a year. I even told them I’ll give you the dollar if you can’t find one.”

Over the years Chilton says he’s deployed cameras around his property and captured a thousand images of what he says are camouflaged smugglers navigating their way through his mountainous ranch.

The 81-year-old is a fifth-generation cattle rancher. He says his ancestors drove cattle from Texas to this area in 1885. Chilton says he has spent several years lobbying for border wall construction on his land, but the construction hasn’t been approved.

But he says he’s pleased that the border wall construction is moving closer to his property.

When Kelly Kimbro watches construction crews plant the sheets of rust-colored steel bollard border wall into the edge of her ranch — east from Chilton’s land — she often thinks back to the day in 1978 her father stumbled across something they had never seen before. After local authorities showed up, she said they realized it was a giant bundle of marijuana.

“We didn’t know what it was,” said Kimbro, 62, as she rumbled across her southeast Arizona border ranch behind the wheel of her 1992 Ford F-350.

Forty-two years later, that same spot serves as the staging ground for construction crews building the border wall in this valley.

That day long ago sparked the border security awakening that Kimbro has observed gradually and dramatically changing this pristine landscape with each passing presidential administration.

Kimbro could not have envisioned then how drastically the idea of border security would evolve. For about a year, she has witnessed construction crews methodically erect the steel border wall across the San Bernardino Valley where her family has ranched for generations.

“That’s too bad for America. That’s too bad that we’re like a laughingstock, because it isn’t going to work,” said Kimbro, who believes the wall won’t stop the flow of drugs and people.

Four miles of Kimbro’s 15,000 acre ranch sits on the international boundary line. She says the construction staging ground has consumed the lower third of her ranch. The serene tranquility of this desert frontier is disrupted by the rumbling engines of construction trucks and heavy machinery.

Kimbro says her family didn’t protest years ago when the federal government brought in steel Normandy vehicle barriers. They invited Border Patrol to install two surveillance camera towers on her property as well, she says.

But, in Kimbro’s view, the wall is pointless. “We are 100% for border security, don’t get us wrong,” said Kimbro. “I promise you it’s never going to secure this country any better than it’s already secure. The Border Patrol has done that job.”