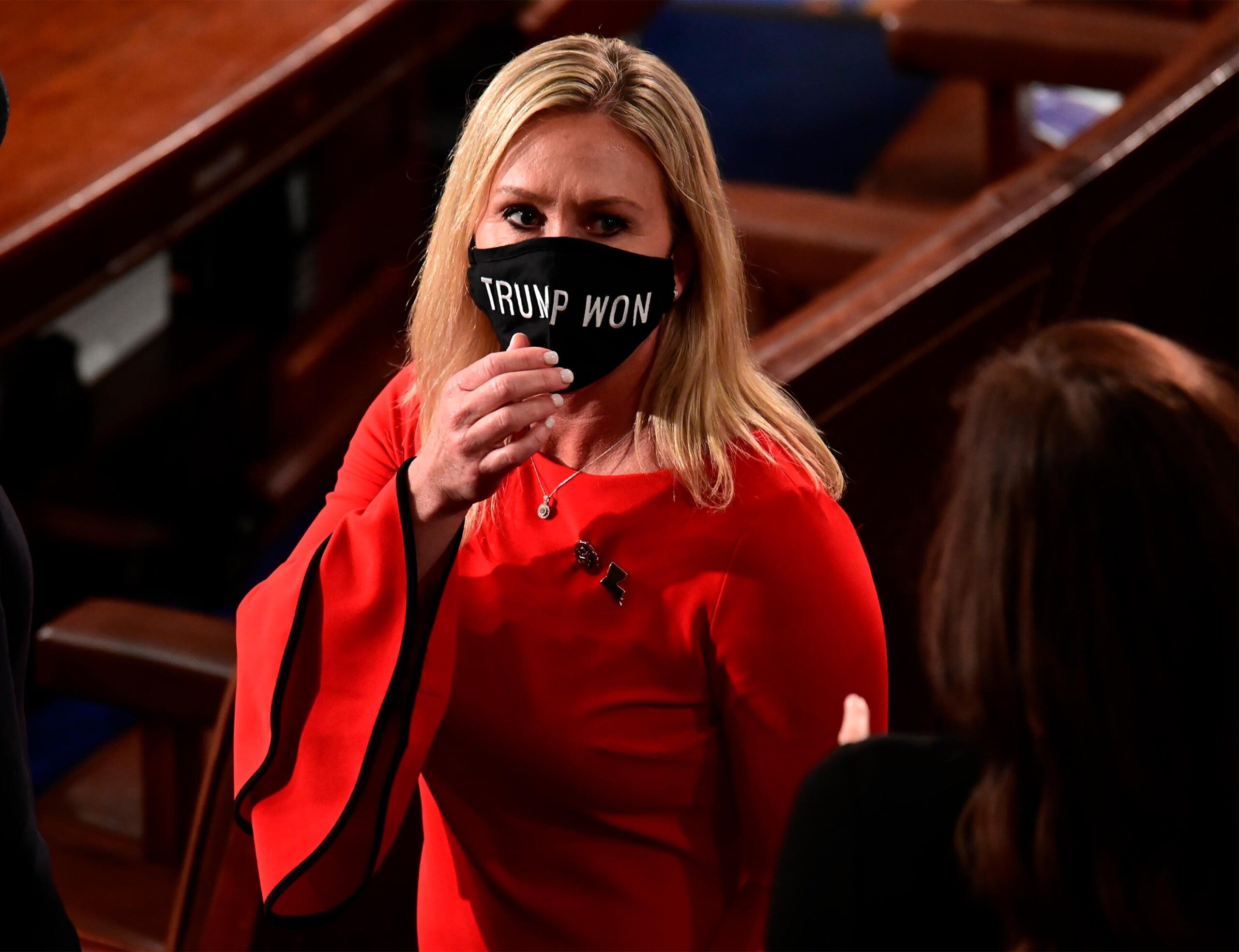 FILE - In this Sunday, Jan. 3, 2021, file photo, Rep. Marjorie Taylor Greene, R-Ga., wears a "Trump Won" face mask as she arrives on the floor of the House to take her oath of office on opening day of the 117th Congress at the U.S. Capitol in Washington. President Joe Biden's inauguration has sown a mixture of anger, confusion and disappointment among believers in the baseless QAnon conspiracy theory. Greene, who has expressed support for the conspiracy theories, called for Biden’s impeachment across her Twitter, Facebook and Telegram accounts as the new president was sworn in, Wednesday, Jan. 20. (Erin Scott/Pool Photo via AP, File)
by: Manu Raju, Lauren Fox and Daniella Diaz, CNN
Posted: Feb 3, 2021 / 07:55 AM EST / Updated: Feb 3, 2021 / 10:39 PM EST

(CNN) — House GOP leader Kevin McCarthy broke his silence on Wednesday over the uproar caused by freshman Rep. Marjorie Taylor Greene’s conspiracy theory views, suggesting Republicans would not move to strip her from her committee assignments, effectively forcing Democrats to take action on their own.

McCarthy’s move is a sharp break from a growing number of Republicans, including Senate Minority Leader Mitch McConnell, who want the party to expunge voices promoting wild conspiracies that threaten to torpedo GOP efforts to rebuild in the aftermath of former President Donald Trump’s administration.

Yet Greene has allied herself with Trump, and many House Republicans say she shouldn’t be punished for views expressed before she was an elected member of Congress — even as lawmakers in both parties are alarmed at revelations that she suggested school massacres were staged events and made many other shocking and racist claims.

House Majority Leader Steny Hoyer, a Maryland Democrat, made the first move toward stripping Greene of her roles on two important House committees after speaking with McCarthy on Wednesday.

Hours later, McCarthy answered Hoyer’s action by announcing no new repercussions for Greene with a statement that amounted to a slap on the wrist for the first-term Republican and spent more time criticizing Democrats than her past comments questioning if the Pentagon was struck by a plane in the September 11, 2001 terrorist attacks, advocating for the assassination of top Democrats or calling a high-profile school shooting a “false flag” operation.

McCarthy said in a statement on Wednesday that Greene’s past statements “do not represent the values or beliefs of the House Republican Conference.” But he did not announce any sanction against Greene, instead saying he would “hold her to her word” that she would be more careful with her comments going forward.

“I understand that Marjorie’s comments have caused deep wounds to many and as a result, I offered Majority Leader Hoyer a path to lower the temperature and address these concerns. Instead of coming together to do that, the Democrats are choosing to raise the temperature by taking the unprecedented step to further their partisan power grab regarding the committee assignments of the other party,” McCarthy said, going on to repeat several attacks on Democratic members.

The statement is unlikely to calm any fears among GOP members, who are growing nervous that his lack of action could embolden fringe members in the conference, damage the party’s reputation and ultimately serve as a long-term distraction that will endanger their ability to win back the House in 2022.

A senior Republican House member, speaking on condition of background in order to freely discuss the ongoing going discussions, told CNN “if he doesn’t act, he’s going to continue to look indecisive.”

Another Republican member familiar with the process, had a more colorful assessment: “Either he has sh** the bed on this thing or he shows he’s going to get us through this. We have to deal with our own House. We have to clean up the mess in our own House.”

That member argued that if McCarthy doesn’t take decisive action, he will force his own Republican conference to walk the plank when Democrats force a resolution that would remove Greene of her committee assignments. It’s a tough vote and one that would force every single member to decide if they stand with Greene or not.

“It’s the job of leadership to protect our rank-and-file members,” the member said.

Hoyer explained on a call with reporters later Wednesday the thinking behind the vote stripping Greene of her committee assignments.

“She has placed many members in fear for their welfare and she has attacked and made incendiary remarks prior to but also during her term as a member of Congress with respect to the safety and welfare of the Speaker of the House and others in the House. And we believe she also gave aid and comfort to those who led an insurrection,” Hoyer said. “The language that she has used, in many respects, goes far beyond the remarks that Steve King made through the years.”

Still, McCarthy is walking a fine line, needing to strike a position on Greene that won’t alienate some of his most conservative members of the Republican conference, unleash the ire of former President Donald Trump or set a precedent that allows representatives to be pulled from committees for comments they made before they were in Congress.

One member argued that while Greene’s comments were “bat**** crazy,” she made them before she was in Congress and that makes it harder for McCarthy to act.

“We need to be thoughtful. I’d like to see her be a productive member of Congress,” the person said before adding “I don’t know if that is possible.”

When Greene was handed committee assignments weeks ago, the thinking among members and leadership was that it would provide the congresswoman a chance to prove she could do the work and move past her conspiracy-theory ridden past.

The thinking — before it was resurfaced that she’d harassed a Parkland survivor on Capitol Hill and argued the shooting was a false flag event — was that the House Committee on Education and Labor would put her under the tutelage of Rep. Virginia Foxx, a North Carolina Republican with a reputation for running a tight ship and standing up against colleagues who step out of line. Greene was then put on Budget where the top Republican, Rep. Jason Smith of Missouri, had a reputation for helping new members understand the intricacies of how Congress worked.

As more and more information about Greene’s past came out and as the congresswoman showed no remorse, the issue of keeping her on the committees appears to have become untenable.

Following his meeting with Greene on Tuesday, McCarthy summoned the powerful Steering Committee for a late-night meeting. The GOP steering panel can remove Republican House members from their committee posts, but two officials with direct knowledge of the meeting told CNN that the committee did not make a decision as of Tuesday night.

During his meeting with Greene, McCarthy asked if she would apologize for her past comments and views, which she did not agree to, a person with knowledge of the matter told CNN. Another person familiar with their conversation also said that McCarthy provided a slew of options to her, including that she could show remorse and apologize.

McCarthy and the steering committee also discussed other options, including forcing her off just the Education Committee but letting her stay on the Budget Committee, according to a person with knowledge of the talks.

Officials said the Steering Committee will meet again Wednesday to see if they can come to a decision. Greene did not meet with the panel.

In relaying how the meeting with Greene went, the two officials who spoke with CNN on Tuesday night said that McCarthy gave no indication that Greene showed any remorse or contrition for her comments.

In an interview with the Washington Examiner after her meeting with McCarthy, Greene ripped into the Republican leader.

“And Kevin McCarthy and all these leaders, the leadership, and everyone is proving that they are all talk and not about action and they’re just all about doing business as usual in Washington. And so what’s the difference between them and the Democrats? There isn’t a difference,” she said.

Greene told the Examiner Democrats are “stupid” for moving toward stripping her of her committee assignments, adding, “I’m pretty amazed at how dumb they are.” She said she’s not worried about losing her assignments.

“Oh no, it doesn’t hurt me at all, I think it’s going to give me more time on my hands, I think, which is fantastic because then I can gain more support, I can help really get Republicans running in these primaries and elections in 2022,” Greene said.

Some come to Greene’s defense in closed-door meeting

The congresswoman was more conciliatory when speaking to the House Republican Conference Wednesday night. According to a person in the room, she said that her social media posts do not reflect who she is as a person.

Following her remarks to the caucus, about half of those in attendance clapped and stood up for her, commending the Georgia freshman on how she addressed the controversy, according to a separate source in the room.

Several GOP House members came to Greene’s defense during the meeting, additional people in the room said, echoing many arguments that have become commonplace in the last week — largely focusing on how she made the controversial remarks before being elected. Some lawmakers argued that Democrats have also said offensive things and Republicans shouldn’t disregard voters who sent her to Congress, those people said.

It was a stark difference compared to the reception Rep. Liz Cheney, the No. 3 House Republican, was receiving in the meeting. Cheney, who is under fire from Trump-backing lawmakers in her party over her vote to impeach the former President, recceived far less support. One of the people in the room said it seemed as if Republicans who were almost certain to vote for her are not speaking out loud on her behalf. A handful of critics voiced their concern with Cheney, saying she has a right to her own vote, but adding that they believe she doesn’t represent the views of the conference and shouldn’t be in leadership, the people said.

It’s unclear if removing Greene from committee spots will be seen by some in the GOP as too far. Rep. Jim Banks, who chairs the conservative Republican Study Committee, told CNN that “it’s a slippery slope” to strip Greene from her committee spots, echoing arguments many of his GOP colleagues are making.

McCarthy told reporters on Wednesday that he had suggested to Hoyer putting her on the House Small Business Committee, but the minority leader signaled he did not think Greene should be punished for comments made before her time in office.

“This was before she was ever elected. They were concerned about her being on Ed, Workforce and Labor,” McCarthy told reporters. “And Marjorie’s also a small business owner. Move her to Small Business. I made that offer to Democrats and they chose to do something that Congress has never done, and if they are going to pick people based on what they said before, are they going to hold them to the same standard to what people said now?”