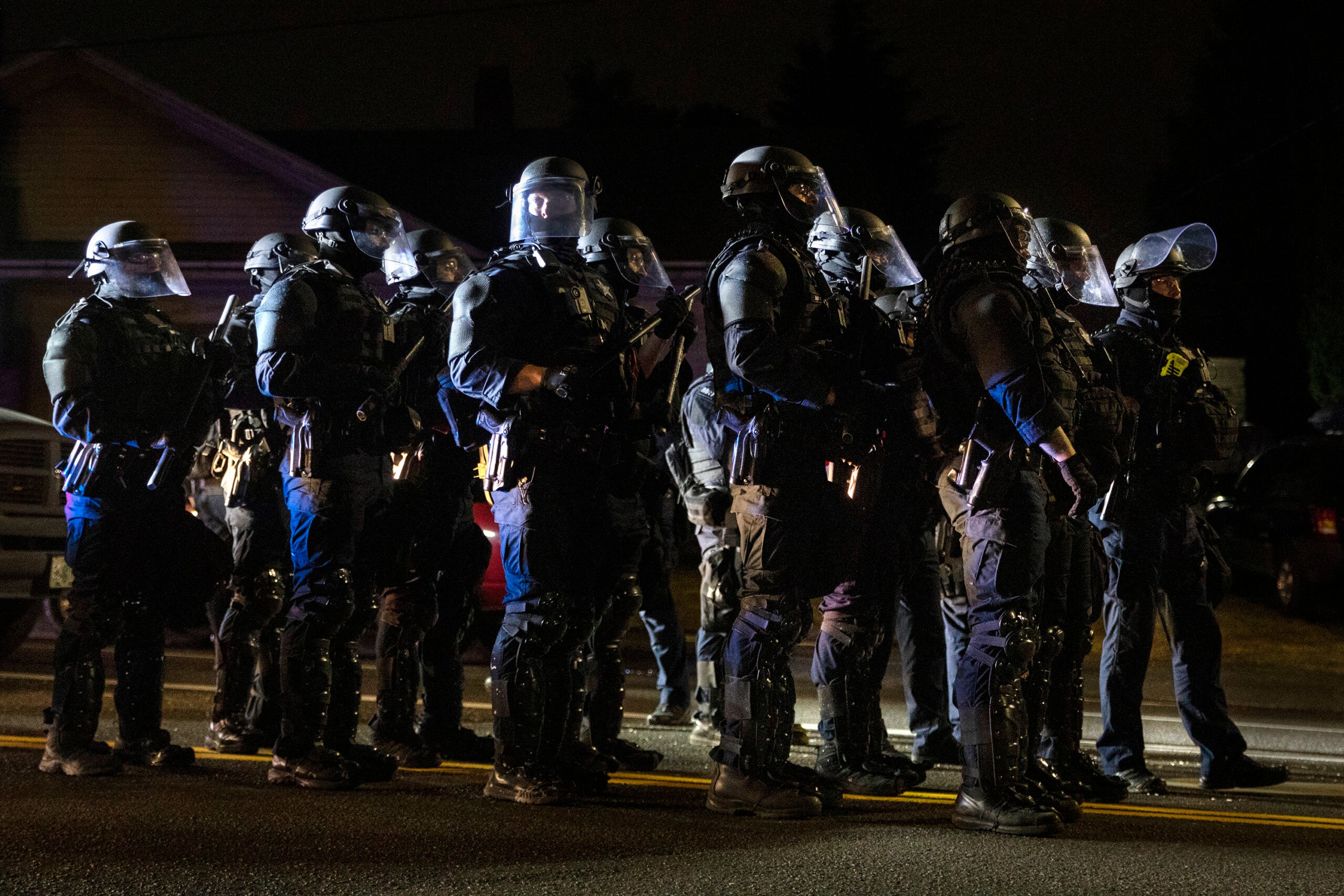 Portland police take control of the streets after making arrests on the scene of the nightly protests at a Portland police precinct on Sunday, Aug. 30, 2020 in Portland, Ore. Oregon State Police will return to Portland to help local authorities after the fatal shooting of a man following clashes between President Donald Trump supporters and counter-protesters that led to an argument between the president and the city's mayor over who was to blame for the violence.(AP Photo/Paula Bronstein)
by: GILLIAN FLACCUS Associated Press
Posted: Sep 1, 2020 / 09:26 AM EST / Updated: Sep 1, 2020 / 09:26 AM EST

PORTLAND, Ore. (AP) — A plan by the governor of Oregon to use sheriff’s deputies from surrounding counties to help patrol Portland following the deadly shooting of a right-wing Trump supporter was sharply criticized by law enforcement officials who said it wouldn’t end the “cycle of violence” in the city that’s approaching 100 consecutive nights of often-violent Black Lives Matter protests.

Gov. Kate Brown, a Democrat, announced the plan Sunday to temporarily use deputies from two counties, as well as Oregon State Police troopers, to help Portland police as the liberal city struggles to regain its footing in the glare of the national spotlight.

But the sheriffs in both counties said Monday they would not send deputies to Portland, where only hours later, police declared another riot after people broke windows, burglarized a business and lit a fire in an occupied apartment building. Officers reported seeing rocks and paint balloons thrown at them, and eventually made 19 arrests as they worked for hours early Tuesday to disperse the crowd, according to a Portland police statement.

“The same offenders are arrested night after night, only to be released by the court and not charged with a crime by the DA’s Office. The next night they are back at it, endangering the lives of law enforcement and the community all over again,” Roberts said. “The criminal justice system will need do its part and hold offenders accountable.”

Charles Boyle, the governor’s chief-of-staff, said: “It is up to each county to determine the personnel and resources they have available to volunteer for this effort.”

The rejection of Brown’s plan leaves state and city police to work the protests in the wake of the fatal shooting of right-wing Trump supporter Aaron J. Danielson. It also leaves uncertainty about the future in Portland as President Donald Trump puts the chaos in his campaign crosshairs.

Danielson, 39, of Portland was shot in the chest late Saturday as protesters clashed with supporters of Trump who drove in a caravan through the city. No one has been arrested in the shooting.

Trump has made Portland and its Democratic leadership a frequent target and the centerpiece of his “law and order” re-election campaign theme. He demanded that local and state leaders call in the National Guard after Saturday’s fatal shooting.

Brown has so far declined to send the Guard to Portland but instead announced the planned coalition of law enforcement agencies. In a statement, she said right-wing groups like Patriot Prayer had come to Portland “looking for a fight” and she vowed to stop more bloodshed.

Portland police also drew criticism Monday for not doing more to keep the dueling groups apart and for letting the situation get out of control. Police Chief Chuck Lovell defended his officers, saying the clashes between protesters and Trump supporters were spread over many city blocks and the shooting took just seconds.

“While it’s easy to cast blame on paramilitary and alt-right groups on the one side, or anti-fascist and Black Lives Matter groups on the other, the responsibility to safeguard communities rests with government,” said Eric Ward, executive director of the nonprofit Western States Center, which helps marginalized communities organize social justice campaigns around the West.