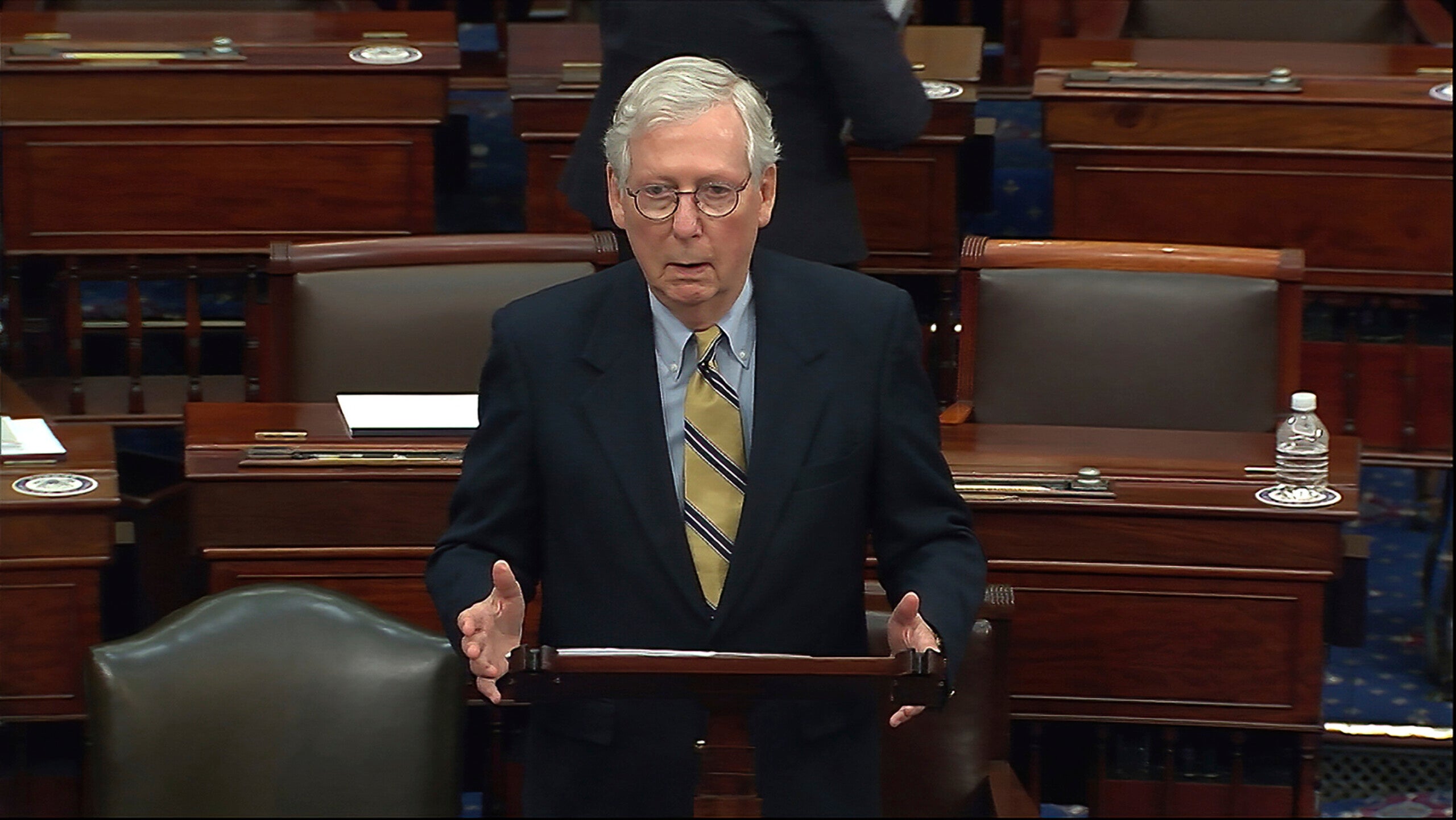 In this image from video, Senate Minority Leader Mitch McConnell of Ky., speaks after the Senate acquitted former President Donald Trump in his second impeachment trial in the Senate at the U.S. Capitol in Washington, Saturday, Feb. 13, 2021. Trump was accused of inciting the Jan. 6 attack on the U.S. Capitol, and the acquittal gives him a historic second victory in the court of impeachment. (Senate Television via AP)
by: Caroline Kelly and Brian Rokus, CNN
Posted: Feb 16, 2021 / 06:05 PM EST / Updated: Feb 16, 2021 / 06:05 PM EST

After that vote, McConnell ripped Trump in a speech from the Senate floor, and the two have been estranged in recent months after working closely together during the former President’s four years in office.

“Mitch is a dour, sullen, and unsmiling political hack, and if Republican Senators are going to stay with him, they will not win again,” Trump said in the statement. “He will never do what needs to be done, or what is right for our Country. Where necessary and appropriate, I will back primary rivals who espouse Making America Great Again and our policy of America First. We want brilliant, strong, thoughtful, and compassionate leadership.”

Trump concluded, “This is a big moment for our country, and we cannot let it pass by using third rate ‘leaders’ to dictate our future!”

The clash between the current and former GOP leaders comes as the Republican Party at large grapples with warring factions at odds over whether to continue in Trump’s likeness or forge a path veering from the former President’s legacy.

McConnell has repeatedly rebuked Trump’s incitement of the January 6 insurrection at the US Capitol, though he voted to acquit the former President of the charge. In remarks on the Senate floor shortly after Trump was cleared in a 57-43 vote, McCconnell suggested that the former President could be subject to criminal prosecution.

“There is no question former President Trump bears moral responsibility,” McConnell wrote Monday in an op-ed in the Wall Street Journal of the riot. “His supporters stormed the Capitol because of the unhinged falsehoods he shouted into the world’s largest megaphone. His behavior during and after the chaos was also unconscionable, from attacking Vice President Mike Pence during the riot to praising the criminals after it ended.”

CNN reported last month that McConnell had indicated he believed that impeaching Trump would make it easier to get rid of the former President and Trumpism from the Republican Party, according to a source with knowledge of the matter.

In the last weeks of Trump’s presidency, the relationship between the then-Senate majority leader and Trump — the two most powerful men in the Republican Party — had essentially collapsed, multiple sources told CNN.

Trump’s statement Tuesday adds McConnell to the list of Republicans whom the former President is targeting after they opposed him.

CNN reported last month that Trump is focusing his political energy on Rep. Liz Cheney of Wyoming, the third-ranking House Republican, who voted for his impeachment last month.

Trump’s push comes as House Minority Leader Kevin McCarthy, a California Republican, is working to shore up his relationship with the ex-President, including meeting with Trump at his Palm Beach resort, Mar-a-Lago, in January. McCarthy and Trump discussed the midterm elections in 2022, according to a readout provided by his Save America PAC.