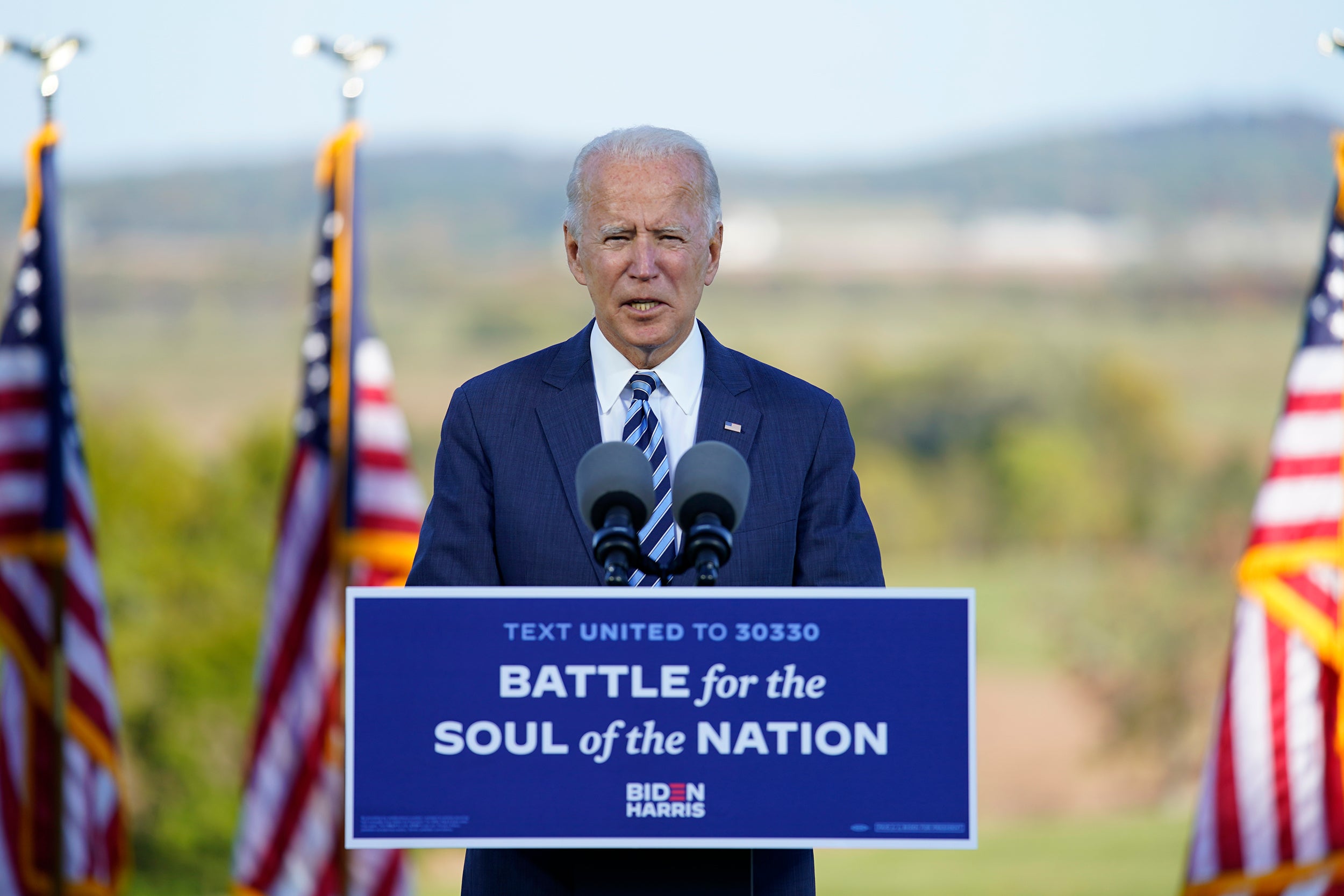 (CNN) — US authorities are investigating whether recently published emails that purport to detail the business dealings of Joe Biden’s son in Ukraine and China are connected to an ongoing Russian disinformation effort targeting the former vice president’s campaign, a US official and a congressional source briefed on the matter said.

The conservative-leaning New York Post claimed in a series of articles this week that it obtained “smoking-gun” emails about Hunter Biden and his dealings in Ukraine. CNN has not determined the authenticity of the emails.

President Donald Trump and his allies have used this topic to smear the Bidens over the past year and seized on the recent articles to attack Biden in the final weeks of the presidential election. The specific new allegations touch on the same topics as the Kremlin’s ongoing disinformation campaign against the Bidens, which the US intelligence community said this summer was intended to weaken Biden’s candidacy against Trump.

The FBI is leading the investigation, the official and congressional source said. NBC was first to report the inquiry.

The probe is part of a larger investigation into Russian disinformation that dates back to before the impeachment inquiry last fall. The alleged disinformation campaign is aimed at tying the former vice president to his son’s dealings with the Ukrainian energy company Burisma, according to US officials familiar with the matter.

Giuliani has openly coordinated with a known Russian agent to promote disinformation about the Bidens. The Washington Post reported Thursday the White House, and Trump personally, were warned in 2019 that Giuliani “was being used to feed Russian misinformation” to the President. Separately, Bannon was recently charged by the Justice Department with orchestrating a million-dollar fraud scheme and accused of deceiving thousands of donors to his nonprofit.

In a Fox News interview Friday, Giuliani said Trump never mentioned the warning to him and that he hasn’t been told by US intelligence officials that he is peddling Russian disinformation.

Several experts on foreign disinformation quickly warned that there were major red flags about the articles published by the New York Post, including Giuliani’s involvement, the changing stories about how the emails were obtained, and the digital metadata of images posted by the newspaper.

The US government announced last month that one of Giuliani’s Ukrainian allies is an “active Russian agent” who has targeted Western media with “false and unsubstantiated narratives” about alleged “corruption” by the Bidens.

Facebook and Twitter took unprecedented steps Wednesday to slow the spread of the articles, triggering a wave of outrage from Trump and Republicans.

Senate Republicans investigated the Bidens’ dealings in Ukraine — a probe that received bipartisan criticism as being a politically motivated endeavor. The Republican in charge even said he hoped the findings would convince people not to vote for Biden, but the investigation ended in September without uncovering any evidence that Biden abused his powers or changed US policy because of his son’s business ties.

One of the New York Post articles claims there is a “smoking-gun email” about an alleged meeting in 2015 between Joe Biden and an executive from Burisma, where Hunter Biden was on the board. In response to the articles, Biden campaign spokesman Andrew Bates said, “We have reviewed Joe Biden’s official schedules from the time and no meeting, as alleged by the New York Post, ever took place.”

The first paragraph of one of the New York Post stories contains blatant disinformation that was debunked last year. It says the alleged meeting in 2015 was problematic because Joe Biden “pressured government officials in Ukraine into firing a prosecutor who was investigating” Burisma. Trump championed this false narrative during his impeachment.

In reality, the Burisma investigation was dormant when Biden urged Ukraine to fire its top prosecutor, Viktor Shokin. Biden’s actions were in support of US and European policy, who wanted Shokin ousted because he was corrupt. Firing him would have increased — not decreased — investigative scrutiny of Burisma.

The article also quotes the Ukrainian energy executive, in another alleged email, saying he was going to be sharing information with Amos Hochstein, who worked closely with Biden when he was Vice President as the special envoy and coordinator for international energy affairs. Hochstein said he never saw any of that information, and he had never been in touch with the Ukrainian energy executive.

“The Republican Senate investigation subpoenaed all my records, including emails and calendars and found no mention of this man. I led the US energy efforts in Ukraine and never even heard of him before yesterday. Our anti-corruption efforts in Ukraine undermined Burisma interests,” Hochstein said.

George Mesires, a lawyer for Hunter Biden, did not respond to a request for comment.

“Joe Biden carried out official US policy toward Ukraine and engaged in no wrongdoing. Trump Administration officials have attested to these facts under oath,” Bates, the Biden campaign spokesman, told CNN, referring to testimony from officials during Trump’s impeachment.

According to the Post, the emails were allegedly found on a laptop hard drive that was brought to a computer repair shop in Delaware in the spring of 2019. The paper wrote that the person who handled the computer’s repairs “couldn’t positively identify the customer as Hunter Biden” but claimed the customer did not retrieve the laptop for several months after it was serviced.

The Post cites a tip from Bannon in late September about the existence of this hard drive and claims Giuliani provided the hard drive to the paper on Oct. 11. In text messages with CNN, Giuliani declined to say how he learned about the hard drive.

“The New York Post never asked the Biden campaign about the critical elements of this story,” Bates, the Biden campaign spokesman, said in a statement to CNN. “They certainly never raised that Rudy Giuliani — whose discredited conspiracy theories and alliance with figures connected to Russian intelligence have been widely reported — claimed to have such materials.”

Giuliani has spent the past year openly colluding with controversial Ukrainian officials to smear Joe Biden and spread disinformation about Hunter Biden. To this end, Giuliani collaborated with current and former Ukrainian officials, including one that the US says is a Russian agent and was sanctioned by the Treasury Department, and a second who had his visa revoked by the State Department.

Attempts to speak with Bannon about his involvement in the story were unsuccessful. Bannon told Dutch broadcast Nieuwsuur/NOS in a September 28 interview that he had the “hard drive of Hunter Biden” and that people should “stand by” for its release.

Giuliani’s own attorney, Robert Costello, told CNN on Wednesday he received a tip from the person in the Delaware computer shop via an email to one of Giuliani’s company addresses in late August. Costello said this person gave him a copy of the hard drive in late August or early September, which Costello then began sifting through.

That shop employee has been identified as John Paul Mac Isaac. He spoke to CNN on Thursday in Wilmington. Mac Isaac said that in April 2019 someone claiming to be Hunter Biden brought in a damaged laptop computer to retrieve the data on it. This required him to manually transfer the computer’s data to a separate hard drive, Mac Isaac said, which is how he came to see what some of the files contained.

“Something that has the potential of being damaging,” said Mac Isaac about the files he saw. “That’s what I feel somebody would come looking for. I needed a level of protection.”

Contradicting what he told reporters the day before, Mac Isaac told CNN he did not contact anyone at the FBI about what he saw but that he made “other plans” to get in touch because he “didn’t feel comfortable.” Eventually, he said, the FBI came and seized the laptop with a subpoena on Dec. 9, 2019. He said he has a receipt for the seized property but declined to share a copy of the FBI paperwork with CNN.

Both the office of the US attorney in Delaware and the FBI declined to confirm or deny the FBI’s involvement or the existence of any investigation when asked by CNN.

Trump staffers promoted the articles all week and his campaign held a press call Wednesday attacking Hunter Biden’s foreign dealings. Trump went on extended riffs about the Hunter Biden stories at his campaign rallies this week, during an interview on Fox News, and he tweeted or re-tweeted more than two dozen posts about the situation since the stories were published.

But Facebook said it decided to “reduce distribution” of the article “pending fact-check review” as part of its policy against “misinformation.” Twitter later blocked users from tweeting links to the main story as part of its policy against spreading “hacked materials,” even though it wasn’t clear whether the underlying emails attributed to Hunter Biden were hacked, copied, or fabricated.

Trump responded with new attacks against the social media companies, saying in one tweet that it was, “so terrible that Facebook and Twitter took down the story” and claiming the articles were “only the beginning.”

A photo emerged on social media of Trump holding Wednesday’s edition of the New York Post, featuring the headline, “BIDEN SECRET E-MAILS.” One of the first people to post the image was Andrii Telizhenko, a former Ukrainian diplomat who has worked with Giuliani to spread conspiracies about the Bidens, and whose visa was recently revoked by the US government.

White House spokesman Judd Deere told CNN the image of Trump was authentic. Telizhenko did not answer questions about how he obtained the photo, which was taken in the Oval Office.