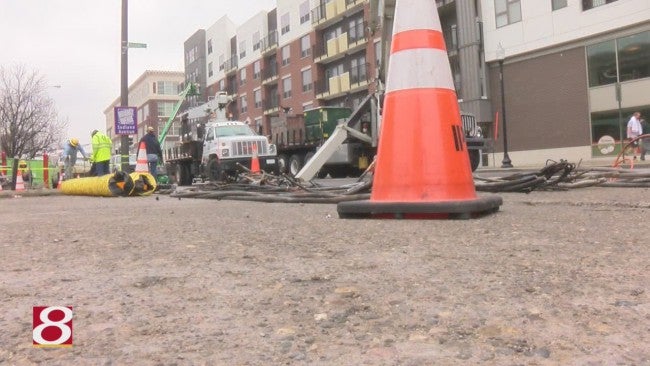 INDIANAPOLIS (WISH) — Some downtown businesses are counting their losses after Thursday’s explosion forced them to close.

By 6 p.m. Friday night, crews had restored power to all affected customers except for a dance studio on Capitol Avenue. Workers said they planned to have power restored there by 7 p.m.

Power was restored at the Mo’Joe Coffeehouse around 12:15 p.m. Now owner Rob Lobdell is scrambling for ways to make up for lost revenue.

The store was closed from Thursday morning to the time power was restored Friday. Lobdell says without electricity, he can’t make coffee and he can’t make any money. He’s asking IPL to compensate.

“I don’t know that they will. They probably won’t,” Lobdell said. “We’re going to talk about it.”

IPL director of communications Brandi Davis-Handy said the company is currently focused on making necessary repairs. She said no decision has been made on whether customers will be compensated.

“We want our customers to know that we’re open to their feedback on how we were able to work with them and we’re here for that,” Davis-Handy said.

Davis-Handy said IPL provided generators for buildings where damage was the most extensive, and those buildings will have to stay on generators into the weekend.

All Star Tire and Auto Service Company was also closed and without power until just after noon Friday. The manager praised IPL’s response and he says he has no plans to seek compensation. But, like Lobdell, he says the outage caused a major loss of revenue.