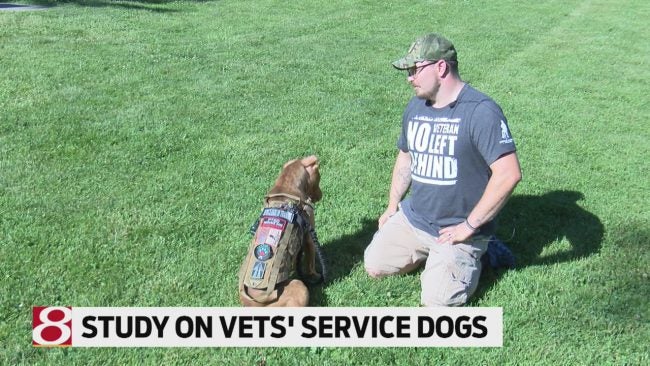 The research could for the first time prove scientifically that service dogs help these veterans. Purdue researchers just received more than a half million dollars to conduct this two year study.

The potential is sweeping change in Washington, D.C. and another resource for vets.

“I was on the verge of succumbing to PTSD,” Hamilton said. “To taking matters in my own hands the wrong way.”

But his life changed late last year when Zoe became his service dog.

“She’s become a battle buddy for me. A companion,” Hamilton said.

Service dogs are highly trained to help people who have physical disabilities or mental illnesses, such as PTSD.

The stories, from veterans around the country, are inspiring.

“She’s a great tool to get me back to what’s really going on around me and off those things that come up that make it difficult,” Hamilton added.

But as more veterans want service dogs, there aren’t enough trained. And the Achilles heel: there’s not a shred of scientific evidence the dogs help.

“So we don’t have the support for it or the insurance to cover it because there isn’t that data behind it,” said Maggie O’Haire, a professor at Purdue University’s College of Veterinary Medicine.

One impact, O’Haire said, is that organizations are fronting high costs to train these dogs. She also said the VA will not cover vets spending tens of thousands of dollars for the dogs. And change will be hard without that proof.

So she’s on a mission to find that proof to help these veterans and potentially affect federal policy to help lower these expenses.

“We need to give them a voice in a way that insurance companies and policymakers will understand, and the language that they speak is science and evidence,” O’Haire said.

She received more than $500,000 in grants to study this for two years. Veterans around the country will participate and briefly get service dogs. They will wear wristbands measuring their activity, their stress and sleep quality.

“We’re told a lot is that the animal will wake the individual up from a nightmare or comfort them after they have woken up from a nightmare and we should be able to track that through these and some of our other measures,” said O’Haire, talking about the symptom of veterans suffering nightmares.

They’ll go through doctor evaluations for PTSD and document their daily activities before and after having a service dog.

It will put numbers and graphs to the stories like Nick Hamilton about what a service dog can do.

“I honestly don’t know what I’d do without [Zoe] right now,” he said.

There are some organizations that help provide vets with service dogs for free. One in Indianapolis is K9s 4 Dogtags and that’s how Hamilton got his, for free, less than a year ago.