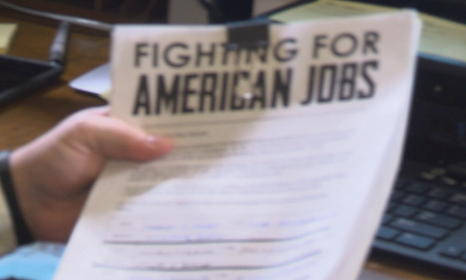 INDIANAPOLIS (WISH) – A group of Rexnord workers marched into the Gov. Eric Holcomb’s office Thursday with a message: save our jobs.

They handed the governor’s assistant a petition signed by 278 people, all asking for the same thing.

“We want to make sure [the governor] does something to keep our jobs here,” union leader and Rexnord worker, Don Zering said. “We really need our jobs bad.”

The workers moved from the statehouse to the Sheraton hotel in downtown Indianapolis, where they rallied with dozens of supporters.

Despite the support, Zering expects layoffs to start next month.

“People ask every day, how come the governor isn’t doing anything? How come Pence didn’t do anything?” Zering said. “That’s why we say, sign this thing, so we can go down there and get involved so maybe they can get involved in doing this.”

Gov. Holcomb has a friend and former boss in the White House: Vice President Mike Pence.

Zering and his coworkers said they need more than a tweet.

“The people are still working out there on 76th  and Rockville Road. They’re still there. You’ve still got time to do something.”

24-Hour News 8 reached out to Rexnord via email and asked if there’s a chance of any jobs staying in Indianapolis. The company had not responded Thursday evening.

“Regrettably so, most of these peoples’ lives aren’t going to anywhere close to what it’s like now as far as being able to provide for their families,” Jones said.

A spokesperson for Gov. Holcomb’s office said the DPW is leading an effort to assist workers.