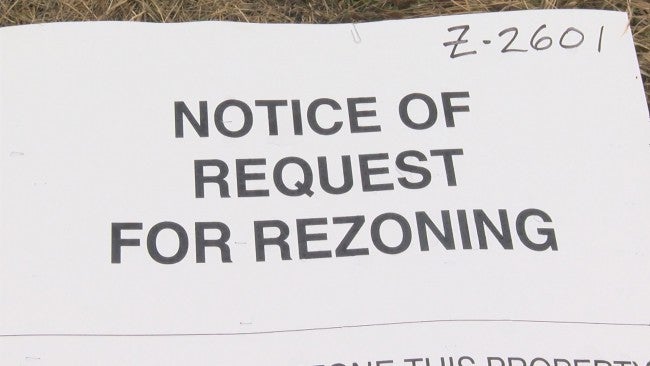 24-Hour News 8 sister station WLFI News says the first, a proposal to change 73 acres from R1 to R1B increase the density of homes on the land. The second proposal, to turn 48 acres from an agricultural zone to a residential.

Hal Webster, who owns property nearby, is not in favor of the proposed changes.

“This is not a very good place to build homes,” said Webster.

Webster said he’s had problems with drainage in the past, and believes the additional homes would add to the problem. He’s also concerned about traffic on CR 600 North. Others say they are concerned about the impact on the schools.

“A large number of those homes are targeting first-time homeowners,” said West Lafayette resident Tekoa Geswein. “That will be a lot of elementary school kids, and our school just can’t handle it.

“The growth and the size of our school really has nothing to do with class size,” said Pearl. “There is not a problem here at Burnett Creek with having rooms to add those teachers after the school year.”

Pearl said reopening the former Battle Ground Middle School for fourth and fifth-grade students this fall will also help. But the attorney for the developer says there will not be any immediate overcrowding issues, as he expects it to take at least a decade for the area to fully develop.

“To me, the concern is totally unfounded and I think residential is appropriate,” attorney Dan Teder.

If the rezonings are approved, before any building can start, the developer will have to work to meet all county ordinance requirements on things like drainage.

“There’s another six months to a year’s worth of work that needs done after the zoning would be approved, before you would be able to start your construction,”said Teder.

The Area Plan Commission is scheduled to make a recommendation on the rezoning cases Wednesday. Then county commissioners are expected to take up the cases at their meeting on April 16.